An IRAMIS team is fitting out a basement area for the purposes of a scientific programme to study laser electron acceleration. Electrons will be generated by the interaction of a laser beam with a helium gas jet. The team called on SENAC, an IRFU department concerned with decommissioning, clean-up and declassification of nuclear facilities, to conduct a biological shielding study with a view to limiting the impact of radiation in the vicinity of the experiment room while the laser is in operation. The study, which lasted two months, pinpointed radiation protection problems caused by the interaction of the laser electron beam with various items of equipment in the new experiment room. The aim was to find suitable solutions to permit the group to use its high-power laser, with the support of SPR, in full compliance with applicable radiation protection regulations concerning personnel.

The study was conducted under a new mutual assistance agreement between SPAM and SENAC for high-power laser projects. 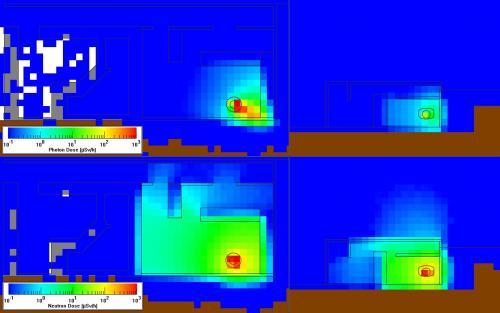 Spatial distributions (side view on left, top view on right) of gamma dose rates (top) and neutrons (bottom) generated in the interaction of the electron beam produced by the UHI 100 laser with interceptors (laser operating frequency of 0.07 Hz)