On 9 September 2009, the 70th coil of the Stellarator W7x, Mademoiselle AAB49N, left hall 198 to join the rest of the family in Greifswald on the shores of the Baltic Sea 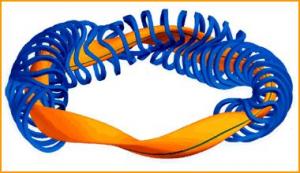 Diagram of the W7X stellarator

The last coil of the Wendelstein W7X stellarator left CEA-Saclay last week, on Wednesday 9 September 2009 to be precise. The event marks the end of trials on the 70 coils of this fusion reactor and seals the success of a major project that began in 1998 and involved many teams from IRFU (formerly known as DAPNIA). The 70th coil has just been tested and validated at the W7x test station and has now gone to join the other 69 members of the family of superconducting coils currently being assembled on the Wendelstein 7-X stellarator, the research machine for the European programme on magnetic confinement thermonuclear fusion.

The tests, performed under a French-German collaboration agreement with the Max Planck Institute-IPP Greifswald, gave scientists from many countries an opportunity to work together and highlighted the CEA's major contribution to the fusion programme. So many thanks to all those who helped to make this project a success. 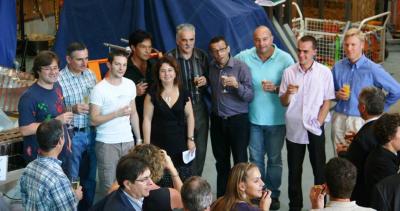