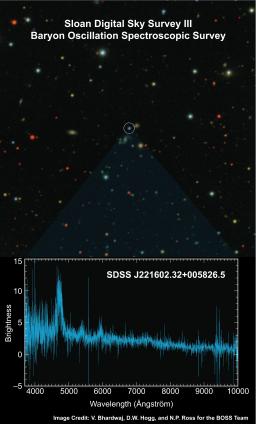 One of the first quasar spectra captured by Boss. This quasar is probably a distant galaxy with a supermassive black hole at its centre. The blue quasar is shown at the top of the figure by a circle on the SDSS map of the sky. Its spectrum, measured by Boss, can be seen at the bottom of the figure. The spectrum will allow astronomers to measure its redshift or, in equivalent terms, the distance of the object. The purpose of Boss is to gather millions of similar spectra and use the distance measurements obtained from them to map out the geometry of the Universe.
Credits: D. Hogg, V. Bhardwaj and N. Ross.

Boss is one of the four projects making up SDSS-III, the Sloan Digital Sky Survey III. Its priority goal is to seek out baryon oscillations which began when pressure waves travelled through the early Universe. Researchers believe that measuring these "fossil" waves will give us a key for understanding the nature of dark energy. Thus, by measuring the length of baryon oscillations, we might be able to learn how dark energy affected the history of the evolution of the Universe.

That night, astronomers used the Sloan Foundation's 2.5 m diameter telescope at Apache Point Observatory in New Mexico to measure the spectra of a thousand galaxies and quasars. This was the first step in a campaign to gather the spectra of 1.4 million galaxies and 160,000 quasars between now and 2014. The Sloan telescope has been equipped with new spectrographs, specially designed for the purposes of the survey. They have been optimised at the extremities of the spectrum, i.e. at the infrared and far blue ends.