The beautiful awakening of the giant ATLAS 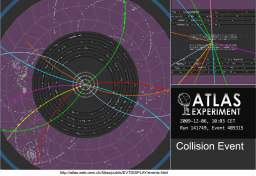 Since the accident which occurred on the LHC accelerator several days after its commissioning in 2008, the ATLAS collaboration has been impatient to observe "true" events produced at the centre of the detector, and to make the equipment function under real conditions. On 23 November, following several days of tests with a single beam, Atlas recorded its first proton-proton collisions, at the injection energy into the LHC (450 GeV per beam, i.e. 900 GeV in the centre of mass reference frame of the collision). Analysis has then been able to reconstruct known unstable particles by detecting their disintegration products, demonstrating that the detectors and associated software are functioning correctly. The Atlas group, from the Particle Physics Department at IRFU, has also been able to check the behaviour of the muon detector sub-systems and the electromagnetic calorimetry, for which it is responsible. Collisions at 2.38 TeV (1.19 TeV per beam) were recorded before the LHC shutdown on 16 December, establishing a new world-record as of the most powerful particle accelerator in the world. The LHC will start up again in February 2010 after a short technical break aiming to produce collisions with higher energies and at higher intensity. Dark matter may be made of new particles, which could be produced in the high-energy proton-proton collisions at LHC. In this case Atlas would be able to discover them.