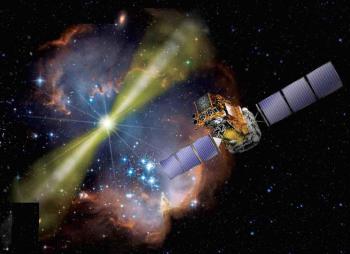 One instrument of the INTEGRAL satellite that continuously monitors the sky was active at the time of the discovery by the LIGO instrument of the first ever-detected gravitational wave, GW150914, resulting from the merger of two black holes. It allowed to search the existence of a high-energy source of light, associated with this exceptional event. With a detector covering almost the entire sky, INTEGRAL has concluded that, at the exact moment of the passage of gravitational waves in the Earth environment, no strong emission of gamma rays appeared. In theory, the merger of two holes is not accompanied by any light emission and this observation confirms this scenario. The capacity of the INTEGRAL satellite to detect brief and sudden events in the sky (as for its multiple detections of gamma-ray bursts) may prove very valuable to study other sources of gravitational waves such as the merger of  neutrons stars or the explosions of very massive star, potential sources of both gravitational waves and gamma radiation. These results are published in the journal Astrophysical Journal Letters of March 30, 2016.

The satellite INTEGRAL (International Gamma-Ray Astrophysics Laboratory), launched on 17 October 2002, has two instruments, the imager (IBIS (Imager on-Board the INTEGRAL Satellite) and the SPI spectrometer (Spectrometer for Integral), capable of locating and measure the energy of hard X-rays and gamma with (15 keV-10 MeV) energy . The CEA has strongly contributed to the development of these instruments (see here for more).
To eliminate charged particles continuously, the main detection plane of the spectrometer SPI is surrounded by a shield of anti-coincidence (SPI / ACS). This system with a wide field of view observe the sky continuously in almost 4-pi steradians and in the energy range between 75 keV and 2 MeV with a temporal resolution of 50 milliseconds. Without being able to provide image, it nevertheless detects any sudden variation of gamma emission and serves in particular to detect gamma-ray bursts, brief flashes of gamma rays, associated with some stellar explosions.

By knowing the exact time of the arrival on Earth of the gravitational wave GW150914 detected by LIGO installation, on September 14, 2015 at 9:50:45 UTC exactly, scientists were able to determine whether this event was accompanied by the emission of gamma rays. No particular counterpart emission was found. The researchers could also compute the maximum flux detectable depending on the position of the source in the sky. In the large error box of the gravitational wave detected by LIGO, they were able to establish that the counterpart of this event in hard X-rays and gamma had an energy at least a million times weaker than that propagated by the gravitational wave. 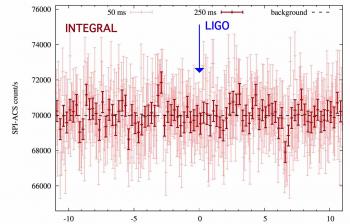 The data from another satellite, the FERMI Gamma-ray Space Telescope, have recently suggested the existence of a gamma ray burst, which occurred only 0.4 second after the gravitational wave. This burst was detected by one of the intruments on board, the GBM (Gamma Burst Monitor) for observing the X-rays and gamma rays with energy from 8 keV to 30 MeV (see arXiv:1602.03920). But the detector on board INTEGRAL, about 10 times more sensitive than the GBM aboard Fermi, does not confirm the existence of this gamma-burst which is therefore probably not linked to a cosmic event.

The most likely mechanism giving rise to the gravitational wave, the merger of two black holes, should not be accompanied by significant light emission, since light remains captured by the intense gravity. Light emission is possible, however, if matter is present surrounding the two massive bodies. 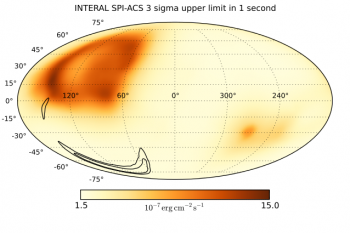