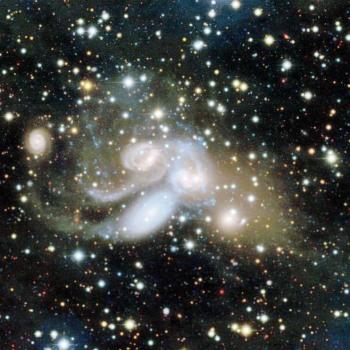 The MegaCam camera developed at CEA-Irfu has revealed previously unsuspected structures within the famous Stephan Quintet, a spectacular combination of five galaxies. The discovery of a very large red halo, consisting of old stars, centered on one of the elliptical galaxies, NGC 7317, shows that the group of galaxies is still in very strong interaction, an aspect totally ignored in previous studies. This interaction shows that Stephan's Quintet is still the scene of generalized galactic cannibalism, in contradiction with the current theoretical predictions, which will therefore have to be revised. These results, from a team from the Strasbourg Astronomical Observatory, the CEA Astrophysics Department and the Lund Observatory (Sweden) are published in the Monthly Notices of the Royal Astronomical Society issue of January 2018.

In groups, galaxies cannibalize each other

The MegaCam camera, built at CEA-Irfu and placed at the focus of the 3.6m diameter Canada-France-Hawaii Telescope (CFHT), provides deep multi-color images of a large field of the sky (about one square degree, or four times the area of ??the full moon). It is particularly suitable for studying groups of galaxies. One of the most famous of these groups is an association of five very beautiful galaxies, located in the constellation of Pegasus, about 340 million light-years away from Earth.
This spectacular group was named "Stephan Quintet", after the French astronomer Edward Stephan who first observed it in 1878. In fact, six galaxies seem to form the group but the sixth (NGC 7320) is located in the foreground, only 40 million light-years away, and its apparent alignment in the line of sight is just a coincidence

This kind of group serves as a prototype for astrophysicists to study the collective evolution of galaxies, subjected to all kinds of processes: slow interactions and collisions, formation of multiple tails called tidal tails, galactic shocks at high speed, gas ramming, outbreak of stellar formation and creation of intergalactic stellar sysyems. By the effect of gravitation, these galaxies in groups cannibalize each other, tearing or merging along their successive interactions. Eventually, this phenomenon of generalized galactic cannibalism leads to the formation of a single giant elliptical galaxy. Because of these specificities, the Stephan Quintet has been the subject of a large number of studies based on multiwavelength observations but also on numerical simulations. 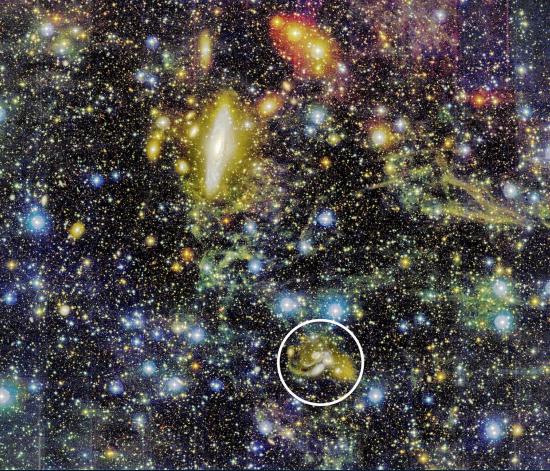 The deep MegaCam images in the large field around Stephan's Quintet revealed for the first time a large number of galactic and extragalactic structures, some extended and with very low surface brightness, including galactic cirrus, fine filaments of interstellar dust in the located in the foreground.

But, in the very heart of Stephan's Quintet, MegaCam also revealed the presence of a red halo, formed of old stars and centered on the elliptical galaxy NGC 7317, a galaxy of the quintet that was thought to be inert or recently merging into the group. This halo, on the contrary, implies that this galaxy is in interaction for a very long time with the other members of the group. Stephan's Quintet seems therefore much older than imagined, and the patterns of formation and evolution of this iconic system have to be revised. 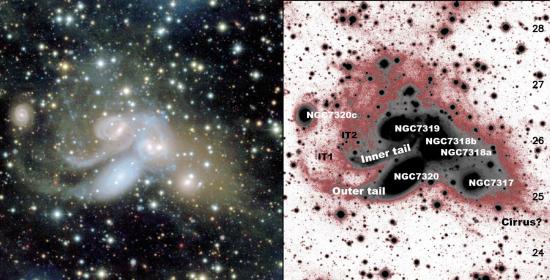 This work illustrates the renewed interest in deep optical imaging of nearby galaxies. Several observational programs, many of which conducted at CFHT, which is particularly well suited for these studies, focus on reconstructing the past history of galaxies through the detection in their environment of these weak and widespread structures. This technique is now known as "galactic archeology".

The wide-field full-frame image, captured by the MegaCam camera and including Stephan's quintet, was originally intended to illustrate the 2018 edition of the CFHT calendar. Each year, under the direction of J.C. Cuillandre, the CFHT produces in collaboration with the Italian publisher Coelum a "Hawaiian Starlight" calendar based on beautiful images of the sky captured by MegaCam