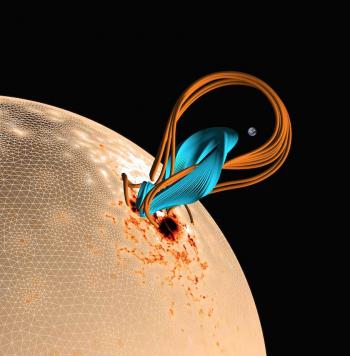 A single phenomenon could control all solar flares. This is what researchers from the Ecole Polytechnique, CNRS, CEA-Irfu and Inria have just proposed in an article in the front page of the journal Nature on February 8, 2018. They highlighted the presence of a reinforced "cage" in which a "magnetic cord" develops, an entanglement of twisted magnetic lines of force at the origin of the solar flares. It is the resistance of this cage to the onslaught of the rope that determines the power and type of the solar eruption to come. This work paves the way to a model capable of predicting the maximum energy that can be released during a solar flare that have potentially devastating consequences for the Earth.

Like on Earth, storms and hurricanes can sweep the atmosphere of the Sun. But in the Sun, these phenomena, caused by a sudden and sudden reconfiguration of the solar magnetic field, are characterized by an intense release of energy in the form of light and particle emissions and, sometimes, by the ejection of a plasma bubble. It is the study of these phenomena, which occur in the Sun corona, the outermost zone of the Sun, which will allow the development of prediction models. These prediction models, as for terrestrial weather, will allow to limit our technological vulnerability to solar eruptions that can impact several sectors (electricity distribution, GPS and communication systems, etc.). 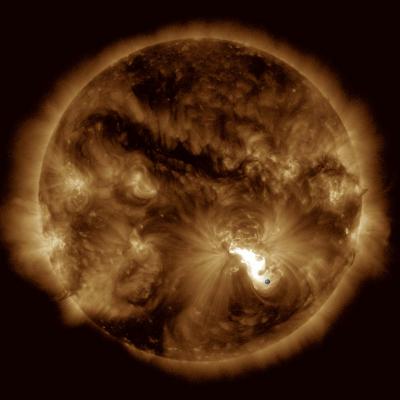 A competition between a "cage" and a magnetic "rope"

In 2014, researchers were able to show that a characteristic structure, a "magnetic rope", entanglement of magnetic lines of force twisted like a hemp rope, appeared gradually in the days before a solar flare. However, they had observed this "rope" only for eruptions that expel plasma bubbles. In this new study, the researchers studied other types of eruptions, whose models are still debated, plunging deeper into the analysis of the solar corona. This area is so thin and so hot that the solar magnetic field is difficult to measure. They proceeded in the same way as for an ultrasound, by first measuring the stronger magnetic field at the denser surface of the Sun, then reconstructing, from these data, what takes place above, in the solar corona.

They applied this method for a very important eruption that occurred in a few hours on October 24, 2014. They showed that during the hours before the eruption, the rope that developed was locked in a multilayer magnetic "cage". Using evolution models calculated on supercomputers, they showed that the energy of the rope was then insufficient to break all the layers of the cage, making impossible a magnetic bubble ejection. The high torsion of the rope nevertheless triggered an instability and the partial destruction of the cage allowed nevertheless the emission of powerful radiations having caused terrestrial disturbances.

On the left: the numerical simulations reveal the presence of a reinforced and multilayered magnetic cage (here in orange and pink) inside which the magnetic cord develops, as an interlace of twisted magnetic lines of force (here in blue) during the last hours before the eruption. Right: Development of the magnetic cord computed by the model during eruption, when it breaks the magnetic cage. © Tahar Amari et al. / Center for Theoretical Physics (CNRS / École Polytechnique).

Thanks to their method, which makes it possible to follow and model an eruption during the last hours before its birth, the researchers have developed a model able to predict the maximum energy that can be released by the area of ??the Sun concerned. This model has shown that, for the 2014 eruption, a huge plasma ejection would have occurred if the cage had been less resistant.
This work, which demonstrates the crucial role played by the "cage-rope" magnetic pair in the control of eruptions, is a new step for the early prediction of solar flares, whose societal impacts are potentially significant.