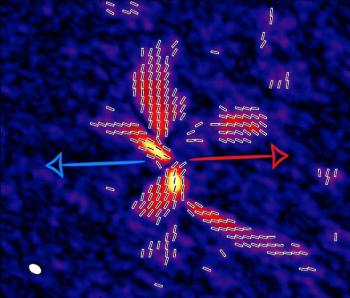 An international team led by the Department of Astrophysics/AIM Laboratory of CEA-Irfu has just shown for the first time that the magnetic field plays a fundamental role in the collapse of proto-stars. Based on observations from the Atacama Large Millimeter Array (ALMA) in Chile, researchers measured the polarization of dust in the B335 protostar. This polarization, emission of light in a preferred direction, results from the alignment of the dust grains under the influence of the magnetic field. In B335, this influence is exerted on a very large area around the collapsing protostar. These observations provide the first proof that the influence of the magnetic field is preponderant in the process of formation of solar-type stars, and more specifically in the formation of future protoplanetary disks. These results are in press in the Monthly Notices of the Royal Astronomical Society.

The interstellar medium, where stars are born, is permeated by large-scale magnetic fields. These magnetic fields are observed everywhere in the clouds where stars form, and were suggested to have a crucial role in supporting the high density medium against its own gravity that ultimately produce low mass stars as our own Sun. Star formation models suggest that these magnetic fields could not only help support protostellar cores against their own gravitational potential, but also that they could significantly affect the rotation of matter in these cores, ultimately affecting the formation of the youngest circumstellar disks, and thus the formation of planets in these disks. Unfortunately the magnetic field cannot be observed directly but its effect can be measured on the dust contained in the protostellar cloud in collapse. When the dust grains are affected by a magnetic field, their long axes partially align perpendicularly to the magnetic field lines. Their radiation is then emitted in a preferred direction and the light emitted is then called "polarized". It is this polarized light which made it possible to measure the effect of the magnetic field in a star-forming core.

The B335 core, located in the Aquila constellation at a distance of just over 300 light-years from Earth, could be observed thanks to the large ALMA interferometer. The polarized emission of dust in the circumstellar material around B335 was detected with ALMA, from a radius of 50 astronomical units up to 1000 astronomical units (astronomical unit = Earth-Sun distance = 150 million kilometers), showing that this young star in formation undergoes the effect of the field over a very large area.

Left: Image of the proto-star B335 in the 1.29mm dust continuum emission, also showing the emission of the dust detected by ALMA at the wavelength of 1.29 mm (green contours) and its polarization (white contours) . The distances are marked by the scale of 100 ua (astronomical unit) shown bottom left. The arrows blue and red mark the direction of the protostellar outflow powered by B335.
Right: the intensity of the polarized light (coded in increasing intensity from blue to yellow) and the deduced direction of the magnetic field (marked by the white dashes). The magnetic field is strongly organized up to a distance of 1000 AU. Credit DAp/CEA_Irfu

Image of protostar B335 in visible light (left) compared to the region studied by ALMA (right). In visible light, B335 remains invisible in the heart of an opaque cloud. ALMA observations in microwave light (1.3mm wavelength) made it possible to solve and study the most central region and to reveal the structures resulting from the effects of the magnetic field.

These data were compared to numerical simulations reproducing the collapse of a proto-star. These simulations confirm that, during collapse, the magnetic field maintains a high level of organization capable of influencing the typical result of protostellar collapse. It is the first time that an observation can prove that the magnetic field has an effect regulating the formation of solar-type stars, and more broadly the formation of future protoplanetary disks. The early phases of protoplanetary disks are of paramount importance for their future evolution. These results have therefore also an impact on our vision of how planetary systems like ours are formed.