Predict the mass of stars 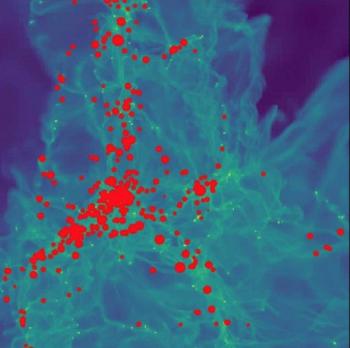 The mass distribution of the different stars formed from a collapsing gas cloud has just been successfully reproduced by two researchers from the Astrophysics Department/AIM Laboratory of CEA-Irfu. The collapse of a gas cloud of 1000 solar mass has been reconstructed thanks to numerical simulations, varying the density and the influence of turbulence. The results of these simulations show the emergence of a characteristic mass that corresponds well to that observed and this largely independently of the initial conditions and directly related to the behavior of the gas. This leads to a very good reproduction of the different masses of stars observed. So far, the mass distribution of stars has remained largely unexplained. These results are published in two articles of the Astronomy & Astrophysics journal.

Stars play a fundamental role in our Universe. On the one hand, they host the planets. On the other hand they are responsible for manufacturing all the chemical elements heavier than helium, such as oxygen and carbon. Finally, by their luminous flux, but also by the matter they eject in form of stellar winds and in explosions at at the end of their life, the supernovae, they radically renew the composition of galaxies and thus govern their evolution.

The mass distribution of the different stars is thus a fundamental quantity to understand the history of the Universe. This distribution is well known thanks to observations. It shows, for example, that the most frequent mass of stars is around 0.3 solar mass (0.3Mo), and decreases quite rapidly below (towards the smaller masses) and beyond (towards the larger masses). In a rather mysterious way, this distribution seems to change little from one place to another of the Galaxy and even from one galaxy to another while the physical conditions like the density can vary enormously. Understanding the origin of this distribution with a characteristic mass of 0.3Mo is therefore a crucial issue. 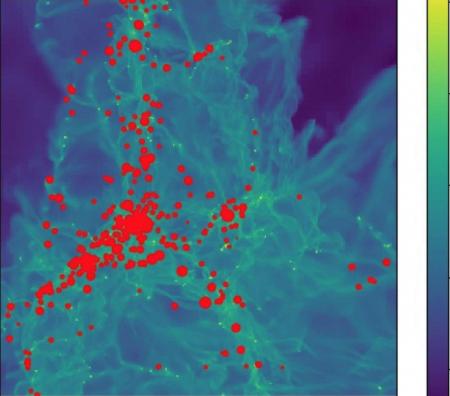 Map of the density of a collapsing cloud. The increasing value of the density is color coded according to the scale on the right. The red dots mark the stars of different mass formed during the simulation. Copyright CEA-DAp.

The power of simulations

Researchers from the Astrophysics Department / AIM Laboratory conducted a series of numerical simulations of a collapsing molecular cloud of a thousand solar masses where they systematically varied the density and initial turbulence of the cloud by several orders of magnitude as well as the gas equation of state. The latter is the equation that governs gas behavior, the result of the radiation transfer processes that take place in the collapsing cloud. It controls the cooling of the gas, including its ability to evacuate excess gravitational energy.

The results showed that during the collapse, a first core called "Larson core" was formed which represents in a way the minimum mass that must be available to form a star. The mass of this core was about two to three hundredths of a solar mass, and was enough to form stars whose final mass is about ten times this value.

To understand the origin of this particular factor, researchers undertook a detailed analysis. This analysis revealed that tidal forces play an important stabilizing role and allow the hydrostatic core to grow by about a factor of ten. Without the influence of these tidal forces, the density fluctuations generated by the turbulence during collapse would lead to a large number of fragments and the characteristic mass would probably be lower. This mechanism has the advantage, besides predicting the good value of the characteristic mass of the stars, to depend very little on the environment and therefore to lead to a mass distribution of stars in fact relatively universal! 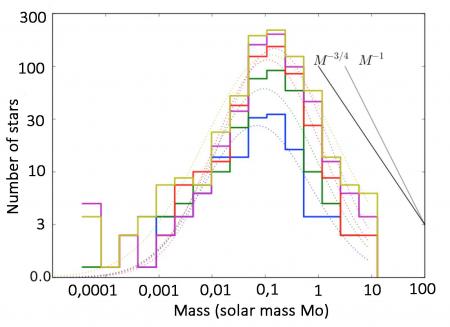 Number of stars produced in the collapse of a cloud by mass domain according to different hypotheses. The star mass distribution is maximum around a mass of 0.1 solar mass, close to the one usually observed. Copyright CEA-DAp.

"Stellar Mass Spectrum Within Massive Collapsing Clumps I. Influence of the Initial Conditions"
Yueh-Ning Lee and Patrick Hennebelle in Astronomy & Astrophysics, Volume 611, A88
for an electronic version: