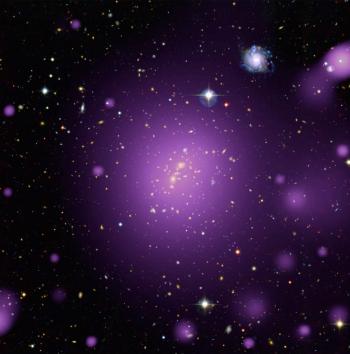 Using the ESA's XMM-Newton observatory, an international team, led by Marguerite Pierre of the Astrophysics Department of CEA-Irfu, has revealed the latest results of the XXL survey, the largest observation program X-ray produced to date by the XMM satellite. The second batch of data just published in a special issue of the journal Astronomy & Astrophysics, includes information on 365 galaxy clusters and 26,000 active galactic nuclei (AGN). By deep examination of two major regions of the sky, the XXL sounding is the first X-ray study to detect enough clusters of galaxies and AGN to trace the large-scale structure of the Universe and its evolution. in time with unprecedented details.

X-ray images of the 365 clusters of galaxies of the XXL survey, observed by the XMM-Newton satellite. The 365 images are ordered as a calendar. Credits: ESA / XMM-Newton / XXL Survey.
[Click on the image to get the correct resolution.]

The results are presented in a series of 20 papers published by the XXL survey collaboration, in a special issue
"The XXL Survey: second series" in Astronomy & Astrophysics.