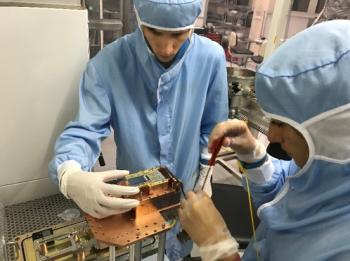 X-ray photons were detected for the first time in late August 2018 with an engineering model of the SVOM MXT focal plane. This is an important step towards the validation of the design of the detection chain.
The MXT telescope, for Microchannel X-ray Telescope, will be flown on board the SVOM satellite, a collaborative project between France (CNES) and China (CAS, CNSA) to study gamma-ray bursts. It aims at detecting soft X-rays (0.2 to 10 keV) at during the early phases of the afterglow emission, and at providing an accurate (smaller than 1 arc minute) position of the burst. Irfu is in charge of the design and realization of the telescope camera, integrating a pnCCD (provided by MPE) X-ray imaging spectrometer assembled on a dedicated ceramic board. The flight model of the detector must be integrated into the camera in one year from now.

The MXT telescope is composed of an optical module inspired by the vision of the lobster and other crustaceans, consisting of a set of micro-channel plates (Micro-Pore Optics, MPOs) with a square channel size of 40 microns, combined with a camera with a CCD detector sensitive to X rays. It will provide images and spectra of sources in the X-ray range with an energy resolution of 80 eV at 1.5 keV. The field of view of the instrument is 1.1°x 1.1°. The instrument is under CNES responsibility, and the latter will in particular provide the carbon fiber tube structure, the radiator and the on board computer, while the optics are developed in collaboration with the University of Leicester. Irfu, in collaboration with the Max Planck Institute für Extraterrestrische Physik (MPE), is in charge of the camera.

The R&D on this detector in Irfu began in 2014. The pnCCD is a silicon detector made of 256x256 pixels, similar to the one that is embedded in the cameras of the eRosita telescope of the Russian SRG mission. The detector is read by a dedicated CAMEX ASICs developed by the Max Planck Institute. 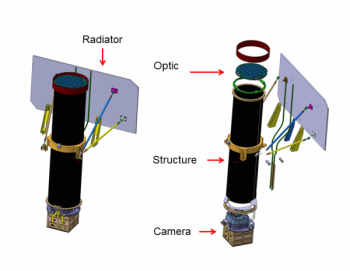 Descriptive scheme of the entire camera: the diameter of the lens is 24 cm, the focal length is 1.15 m and the structure is made of carbon fibre. Credit: CEA/CNES

The pnCCD and ASICs are assembled on a multi-layer circuit on a ceramic substrate to ensure good thermal dissipation. The sensor and its proximity electronics are placed in a shielding and cooled down by thermo-electric modules. The complicated thermal environment as well as the severe radiative conditions of the orbit chosen for SVOM make the implementation of this detector a real challenge: the proton flux is estimated at the equivalent of 2 x109 protons of 10 MeV per cm² after five years in orbit.
The integration of the focal plane into the clean room cryostat involves several complex steps, which required great precision and several rehearsals, as shown in the video below.

Once the cryostat is closed, it is taken to a test room. Irfu has developed a specific test bench for the occasion. Then the detector is cooled to at least -60°C, and placed in front of a radioactive source. The tests carried out at the end of August showed that it is capable of detecting X-photons, thus validating all the work carried out by the various teams over the past 4 years.

Each event (dot on the image) must then be extracted, the amplitude information processed and cumulated to obtain a spectrum, which allows to quantity the spectral capacity of the detector. A first spectrum has been obtained with a 57Co source but progress on detector polarization conditions and data processing remains to be supplied to achieve the mission performance objectives.

The next step in early 2019 will be to irradiate the detector with protons to simulate space conditions. The flight model detector must be integrated into the camera in one year, the final step for the detector developed at Irfu. The countdown therefore begins: it is necessary to fully understand the operation of the detector itself, validate the design of the associated reading electronics entirely developed at Irfu with non-American components, and manufacture and characterize three other models, including the one that will finally on-board. 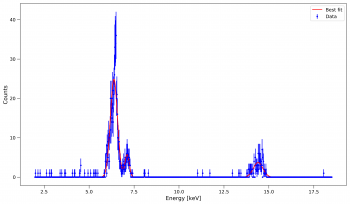