Protons as messengers of nuclear effects in neutrino-nucleus interactions

The T2K collaboration, whose goal is to study and measure neutrino oscillations, is publishing new results on the interaction of neutrinos with nuclei. This study, in which the T2K group of the IRFU plays a major role, is crucial in that it allows the dominant uncertainty on the oscillation parameters to be restrained. For the first time, protons emerging from the neutrino-nucleus interaction have been characterized using new variables capable of exposing and characterizing nuclear effects.

Neutrino oscillations are experimentally well established but they cannot be explained by the Standard Model, the most complete and accurate theory to date to describe the physics of elementary particles. They are manifested by the fact that neutrinos produced with a given flavor (electron, muon or tau) are detected, after their propagation, with another flavor. The flavor of the neutrinos detected is determined by the flavor of the lepton (electron, muon or tauon) produced when the neutrinos interact by "charged current" with the nuclei of the detector. The characteristics of these interactions are dependent on nuclear effects in nuclei, effects that are extremely poorly understood.

T2K studies neutrino oscillations using a muon neutrino beam produced at JPARC on the east coast of Japan. T2K scientists compare the neutrinos before oscillation in the nearby ND280 detector, 280 m from the accelerator, to neutrinos after oscillation in the SuperKamiokande distant detector, located on the west coast at 295 km from the accelerator. ND280 is instrumented with scintillators, which function as targets for neutrino interactions, alternating with time projection chambers for reconstruction of tracks of particles produced in the interactions. The IRFU T2K group played a fundamental role in the design, construction and operation of these chambers, which are the heart of the detector. These devices are surrounded by calorimeters, a muon detector and a magnet. ND280 thus allows an accurate and complete measurement of the momentum and charge of the majority of the particles produced by neutrino interactions in targets. Thanks to this specificity, the cross-sections of these interactions can be measured as a function of all the particles produced, as shown in the figure. At T2K energy, the most frequent interaction produces a muon and one or more protons in the final state. T2K has just published the first cross-section measurement for interactions of this type as a function of the parameters of the outgoing protons and as a function of the kinematic correlations between these protons and the muon. 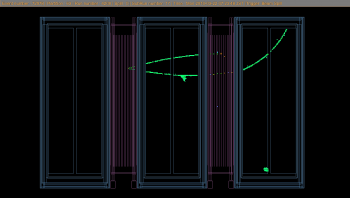 Interaction of a neutrino in the hydrocarbon target of the near detector ND280 with a muon and a proton in the final state. The green lines represent the tracks left by the particles and reconstructed in the time projection chambers. 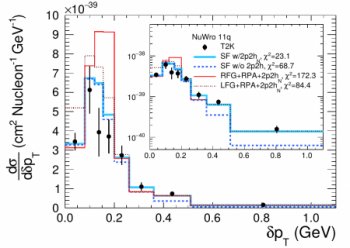 One of the new measurements published: effective cross-section as a function of the asymmetry between the momentum of the muon and the one of the proton in the plane transverse to the direction of the incident neutrino. The measurement is compared to several nuclear effect models.

The nuclear effects in neutrino-nucleus interactions are not well known and are difficult to model, as explained in ScintillationS No. 96, page 8 and in the highlight here (in French). In the latter, the T2K group of the IRFU preformed a first cross-section measurement, but only as a function of the parameters of the outgoing muon[1]. The same process has just been measured again by including the parameters of protons in the final state, which allows multiple measurements: a multi-differential analysis as a function of the momentum and angles of the outgoing muon and proton and the multiplicity of protons, the asymmetries between the muon and the proton in the plane transverse to the direction of the neutrino (transverse variables), and the difference between the kinematics of the measured proton and that expected in the assumption of a "quasi-elastic" interaction, i.e. with the production of a muon and a proton without significant nuclear effects. The first two analyses presented in the article were performed at IRFU, in collaboration with the T2K groups of the LPNHE and LLR.

In the quasi-elastic hypothesis, the transverse momenta of the muon and the proton should be exactly opposite. This assumption is the one used to estimate the energy of the initial neutrino in the oscillation analysis, so it is of primary importance that the model used in the simulation correctly predicts the deviations due to nuclear effects. Unfortunately, as shown in the figure, the neutrino nucleus interaction models used so far are not able to reproduce these measurements. This is the first time that these models have been tested against the proton parameters and these new results shed new light on the uncertainties associated with modeling neutrino interactions in oscillation analyses. Mastering these effects will be crucial to achieve the necessary accuracy (~2%) in the next generation of accelerator neutrino-oscillation experiments, including DUNE and HyperKamiokande.

The new measures suggest important areas for improvement of the models. The model based on a spectral function to describe the nucleons in the nucleus (called SF in the figure) reasonably well describes measurements with a proton in the final state; in contrast, the models based on a fermionic gas (RFG and LFG in the figure) better describe events where the proton has an momentum too low to be identified in the detector. The results (especially the tail of the distribution of the transverse variable in the figure) show a preference for the presence of multi-nucleon interactions (called 2p2h in the figure), where the neutrino interacts not with a single nucleon in the nucleus but with several correlated nucleons.

Close collaboration between the experimentalists and theoreticians who develop these models is necessary to improve them and include these improvements in the simulations used in the experiments. Work is ongoing: several nuclear effects theoreticians have been and will be welcomed at DPhP with P2IO funding. This collaboration is expected to further develop into the next generation of higher-precision neutrino oscillation experiments.