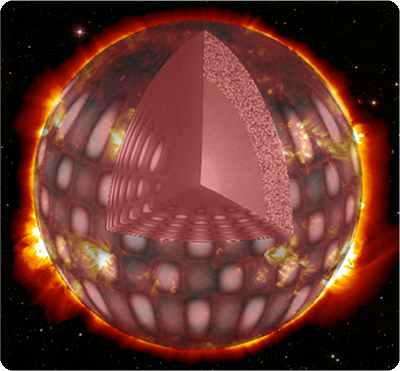 Interpreting the laughter of the stars....

It is possible to probe the internal structure of a star by studying its vibration modes (or oscillations). These "laughs" can be observed using satellites for which major programs have been implemented since the 2000s: CoRoT (CNES / ESA), Kepler (NASA), currently TESS (MIT / NASA), and soon PLATO (ESA) are watching and listening to millions of stars.
As part of her doctorate in asteroismology at the CEA, Lisa Bugnet is particularly interested in the red giants, those old Suns whose laughter has not yet revealed all its secrets. "My project is to test the hypothesis that a strong magnetic field is at the origin of certain misunderstood phenomena in the heart of the red giants", she adds.
To achieve this, the researcher also developed the very first tool for automatic classification by artificial intelligence (AI) of stars thanks to their luminous variability. Its tool is now used within the international collaboration TESS Data Analysis to classify in real time the stars observed by the TESS satellite.
To complete this tool, she characterized the stars by estimating their surface gravity using a second AI method, which was awarded the prize for best oral contribution at the Kepler Asteroseismic Science Operations Center International Conference in Denmark in 2018. She is now focusing on the in-depth study of the laughter of these stars.

... and communicate it around you

Lisa Bugnet also wants to make this laugh communicative by getting involved in scientific dissemination projects. She finished second in the "Chronothesis: my thesis in 5 minutes" competition organized by the Association Française d'Astronomie during the 2018 Science Day, during which she was able to share her daily life with a class of high school students. This experience led her to participate and join the national selection of the major international competition "My thesis in 180 seconds" following the first prize of the jury won during the university selection phase.
To rally the curious and the scientific community, Lisa Bugnet also wants to create and maintain her "Zooniverse" project, allowing the general public to participate in her work to characterize the stars of our galaxy. "The project I am proposing should be exciting for young and old alike", she says.