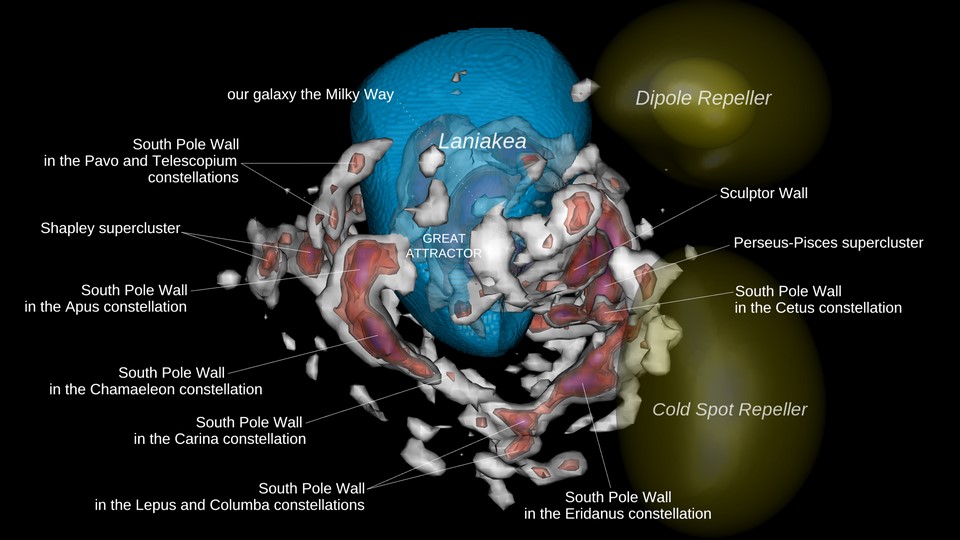 3D visualization of our cosmography. Our Milky Way galaxy is located in the center and the whole map covers a region of dimension 1 billion light-years. The grey and red surfaces represent the structure of the Cosmic Web, among which the South Pole Wall stands out. In the shape of an arc, it embraces the gravitational attraction pool of Laniakea, our supercluster of galaxies, shown in blue. The cosmic voids of the Dipolar Repulsor and the Cold Spot Repulsor are represented by semi-transparent dark green volumes.

That's one wall the White Walkers won't cross. An international collaboration bringing together the IRFU (Université Paris-Saclay), the Astronomy Institute of the University of Hawaii, the LPC (Université Clermont Auvergne), the IP2I (Université Claude Bernard de Lyon), and the Racah Institute of Physics (Hebrew University of Jerusalem), has discovered an immense structure in the distribution of galaxies, called the "South Pole Wall".

Thanks to a method based on the velocity fields of galaxies, this region of the sky, previously unknown because it is masked by molecular clouds and dust located in the foreground of our galaxy, brings a new piece to the puzzle of the cosmic web of our nearby Universe. This cosmic web consists of nodes connected by filaments, separating voids. Galaxies are pulled from the voids to the filaments and then to the gravitational attractors located at the nodes of the web. The filaments, sandwiched between the voids, can take a flattened shape to form walls.

The South Pole Wall has a huge rectilinear section (220 Mpc) at the ends of which it curves to follow the Laniakea border.

Research in cosmology over the last forty years has been marked by the discovery of ever larger structures as instruments have made it possible to probe ever larger and more distant regions of the Universe:

In this history of discoveries of large structures, a region of the sky remained essentially unexplored, an "Astra Incognita", in the direction of the Celestial South Pole (i.e. along the line defined by the axis of rotation of our planet, in the Southern direction). This region, located at the observational limits of telescopes located in the southernmost observatories, such as the Siding Springs Observatory in Australia, is characterized by the presence of thick clouds of galactic dust, such as the Cloud Complex in the Chameleon constellation, or the presence of the Magellanic Clouds, two satellite galaxies of ours, which mask entire sections of the deep sky. Galaxy surveys have therefore been penalized by the presence of holes in their sky cover in this southernmost region.

However, a new study, based on the analysis of galaxy motions, has made it possible to explore this region for the first time. Indeed, the movement of the latter, generated by gravitation, betrays the presence of matter even in regions not directly observed. Using the latest generation of the galaxy velocity catalogue, Cosmicflows-3, which includes about 18,000 velocity measurements of galaxies or groups of galaxies, a reconstruction of the distribution of matter in 3D in the southern sky revealed the presence of a previously unknown wall: the South Pole Wall. It is similar in morphology and dimension to the Sloan Great Wall, while being twice as close to us. Its heart is located in the Chameleon Constellation, and it comprises a long, almost straight filament connecting particularly dense sectors in the Bird of Paradise and Hare constellations. Extending curving to reach the sector of the constellation of Eridan near the celestial equator, it describes an immense arc that embraces the southern borders of Laniakea, the gravitational basin of attraction in which our galaxy, the Milky Way, is located.

Visualization of cosmic currents. The 3D velocity field is represented using lines of currents initiated in high density regions, such as the South Pole Wall, represented by a grey surface.

The current lines ending at the Shapley Attractor, the Great Attractor, and the Persea- Fish Supercluster Attractor are shown in black, blue, and red, respectively.

A sky map centered on the Celestial South Pole representing the South Pole Wall. The contours of three levels of the density field map regions denser than the average of the Universe: a low level in gray, an intermediate level and a high level in shades of red. The South Pole Wall is adjacent to the galactic dust obscuration zone, and is located opposite the Shapley Supercluster across the obscuration zone. The positions of the peaks in the density field are indicated and named using the names of the constellations in which they are located, + their cosmological recession rate in units of 1000 kilometres per second, which is an indicator of their distance. For example, at the heart of the South Pole Wall, the Chamaeleon+11.8 density peak is located at a recession speed of 11800 km/s, a distance of 157 Megaparsecs, or about 500 million light-years.

The catalogue is expanding...

Continuing the Cosmos mapping project, the collaboration is now working on the preparation of the future generation of galaxy velocity catalogue, Cosmicflows-4, made up of about 30,000 galaxies, with the inclusion of new measurements obtained in the Northern Hemisphere with the Green Bank and Arecibo radio telescopes.