The Sloan Digital Sky Survey (SDSS) published in July a complete analysis of the largest three-dimensional map of the Universe ever created, reconstructing the history of its expansion over a period of 11 billion years.

"Before eBOSS, the last 6 billion years of the Universe expansion were well known," says Etienne Burtin (CEA-Irfu, Paris Saclay), who co-led the analysis of the data. "Now, more than 11 billion years of the expansion history will allow us to refine our knowledge of the Universe”. The new results come from the Extended Baryonic Oscillation Spectroscopic Survey (eBOSS, P.I. Kyle Dawson, University of Utah), an international collaboration of more than 100 astrophysicists that is one of the major observing programs that make up the SDSS. "French laboratories have played a major role in the design and analysis of the different parts of the eBOSS program," says Christophe Yèche (CEA-Irfu, Paris Saclay), "and the ANR and the various funding agencies have provided significant support”. The harvest of new results includes detailed measurements of more than two million galaxies and quasars, as well as thousands of cosmic voids, covering the last 11 billion years. 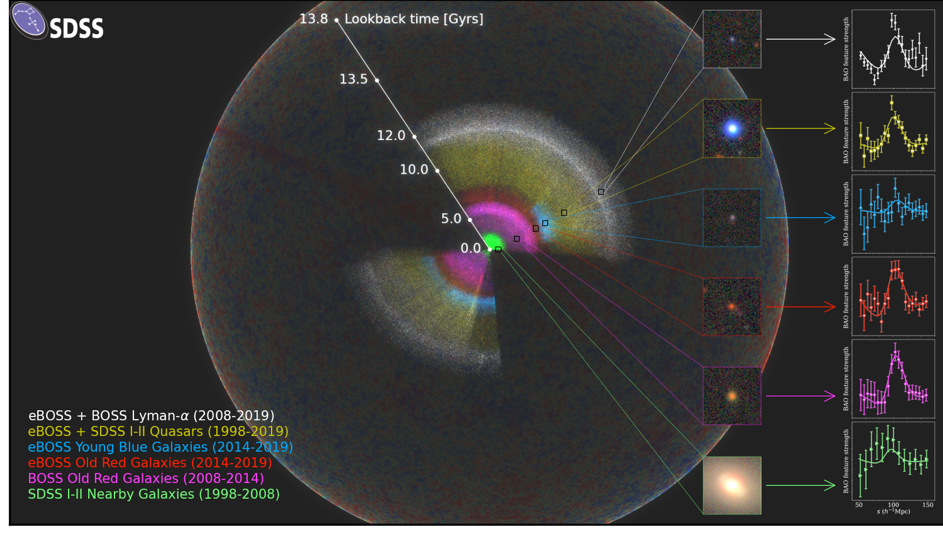 The map measured by SDSS shows (in color) the different astrophysical objects used to access different periods in the evolution of the Universe. We are located at the center of this map and observing distant objects is equivalent to observing the Universe as it was in the past. The visual thumbnails on the right side of the map show the characteristic pattern observed in the distribution of galaxies. The position of this pattern measured at different times has been corrected for the expansion of the Universe and therefore appears at the same value in all small figures. Credit: Anand Raichoor (EPFL) and SDSS.

The early Universe is known through measurements of the Cosmic Microwave Background and relative abundances of primordial chemical elements created shortly after the Big Bang. We also know the history of its expansion over the last few billion years from three-dimensional maps of galaxies and distance measurements, including those from previous phases of the SDSS. These studies allow us to link all these measurements into a complete history of the expansion of the Universe. The final map is shown in the attached image. Careful examination reveals the filaments and voids that define the structure of the Universe, inherited from the time when the Universe was only about 300,000 years old. From this map, researchers are looking for patterns in the distribution of galaxies. In particular, because of the phenomenon of "Baryonic Acoustic Oscillations" that took place in the primordial Universe, the distribution of matter is not random and galaxies are separated on average by a characteristic distance. The signatures of these patterns at different times in the history of the Universe are shown in the boxes in the attached image. They allow us to measure several key parameters of our Universe with an accuracy better than one percent. This map represents the combined effort of more than 20 years of mapping the Universe using the Sloan Foundation Telescope (New Mexico, USA). The cosmic structure revealed on this map shows that about six billion years ago, the expansion of the Universe began to accelerate, and has continued to accelerate ever since. This accelerated expansion seems to be due to a mysterious invisible component of the Universe called "dark energy", in accordance with Einstein's general theory of relativity but extremely difficult to reconcile with our current understanding of particle physics.

Map of the Cosmic Microwave Background with the volume of the SDSS survey superimposed (different colors were used to highlight that different types of astrophysical objects were used to study sub-regions of the volume). Credits: Cheng Zhao and Anand Raichoor (EPFL and SDSS) 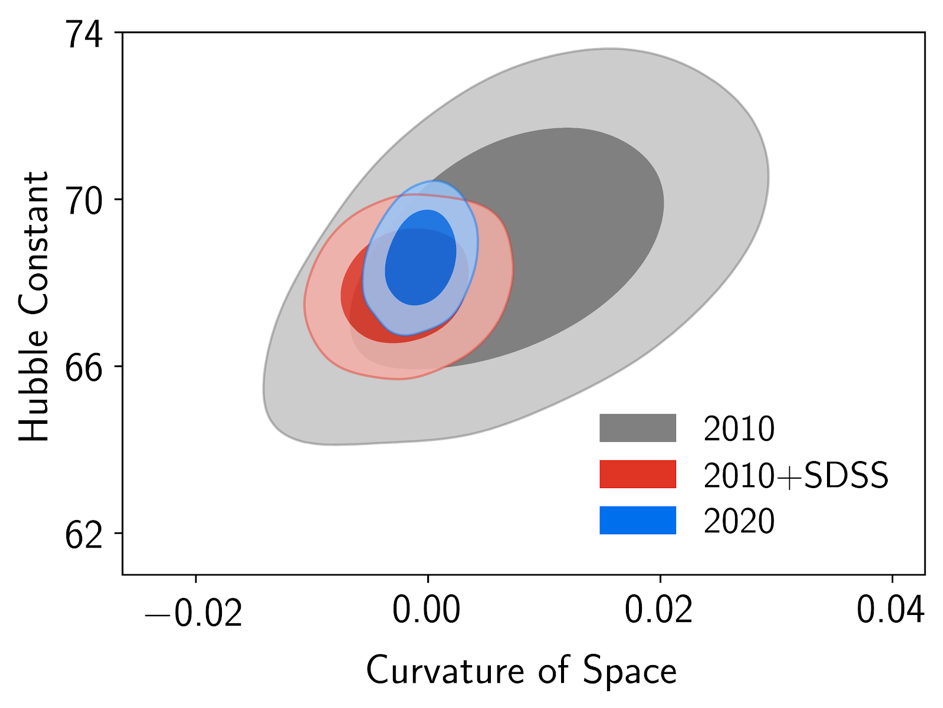 This image illustrates the impact that SDSS maps (including those from eBOSS) have had over the past 20 years on our understanding of the current rate of expansion and curvature of the Universe. The grey area shows the state of our knowledge 10 years ago, before SDSS was launched. The blue region shows the best current measure, which combines SDSS and other programs. The decreasing size of the colored regions is due to the improvement in measurement accuracy. The contribution of SDSS compared to the situation in 2010 is indicated by the red region and shows the major impact of this program. Measurements of the curvature of the Universe are shown on the horizontal axis. The SDSS results, which taper around zero, suggest that the Universe is flat, and significantly improve the constraints of other experiments. The vertical axis shows the current rate of expansion of the Universe (the Hubble constant). Hubble constant measurements from SDSS and other studies of the distant Universe do not agree with measurements based on galaxies in the near Universe, which find a value of about 74 in these units, compared to 68 for SDSS. The accurate data from SDSS and other experiments of the last decade made it possible to reveal this discrepancy. Credit: Eva-Maria Mueller (Oxford) and SDSS.

eBOSS data are so accurate and cover such a large cosmic time interval that they are a key ingredient for measuring many fundamental properties of the Universe, such as its geometric curvature or the properties of dark energy.  When combined with Cosmic Microwave Background and supernovae data, these data indicate a flat Universe and constant density dark energy.
The combination of eBOSS observations and Cosmic Microwave Background studies also reveals tensions in our view of the Universe. For example, the eBOSS measurement of the current rate of expansion of the Universe (the "Hubble constant") is about 10% lower than the value found from distances to nearby galaxies. Given the high accuracy of the eBOSS data, it is very unlikely that this difference is due to chance, especially since the rich variety of astrophysical objects measured by eBOSS provides multiple independent ways to draw the same conclusion. "The results from the full SDSS sample reinforce the disagreement with the value of the Hubble constant measured in the near Universe," said Vanina Ruhlmann-Kleider (CEA-Irfu, Paris Saclay). There is no widely accepted explanation for this difference in the rate of expansion measurements, but an interesting possibility is that a previously unknown form of matter or energy from the early Universe may has left a trace in its later history.

In total, the eBOSS team released the results of more than 20 scientific papers. These articles describe, in more than 500 pages, the analyses carried out on the latest eBOSS data, marking the completion of the main objectives of the research program that began a decade ago.

Within the eBOSS team, individual groups at universities around the world have focused on different aspects of the analysis. To create the part of the map that is six billion years old, the team used luminous red galaxies. "The red galaxies are the largest sample in SDSS and thus provide the most accurate measurements," says Romain Paviot, PhD student at LAM (CNRS INSU/IN2P3 and Aix-Marseille University). To go further back in time, eBOSS exploited, for the first time in SDSS, younger, star-forming blue galaxies. Finally, to map the Universe even further, they took advantage of quasars, luminous galaxies illuminated by matter falling on a central supermassive black hole. "It is the study of the positions of quasars and neutral hydrogen clouds that absorb their light that makes it possible to probe the Universe at 11 billion years and beyond," explains Christophe Balland, head of the eBOSS activity at the LPNHE (CNRS/IN2P3, Sorbonne University and University of Paris). Each of these samples required meticulous analysis to eliminate contaminants and reveal the characteristics of the Universe. "We set up methods based on simulations of the Universe to ensure that the analytical procedures provide unbiased results," adds Alex Smith, post-doctoral fellow at CEA-Irfu.
eBOSS, and the SDSS more generally, leaves the dark energy conundrum and the discrepancy between different measures of the Universe expansion rate as a legacy for future projects. Over the next decade, future observation programs in which France is heavily involved, such as DESI, Euclid and LSST, could solve the enigma, or perhaps reveal other surprises.