Muography is present at the heart of nuclear reactors 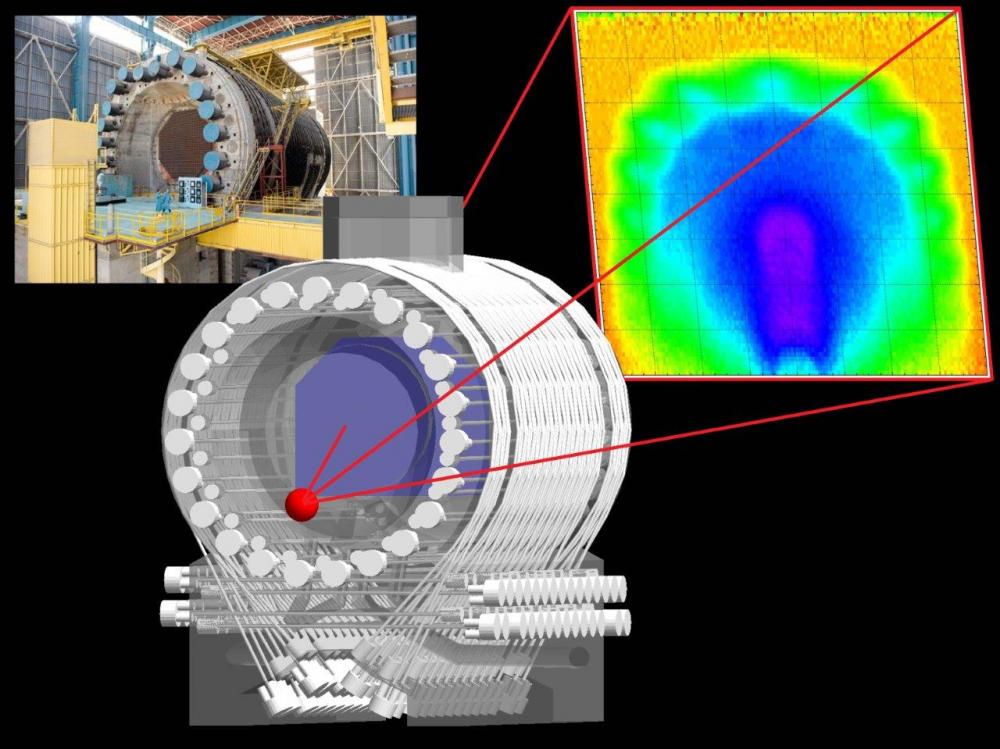 Within the framework of a collaborative project between the DES/DDSD and the DRF/IRFU, a feasibility study of muography potential for the auscultation of nuclear reactors was initiated in 2017. After an initial evaluation phase carried out by IRFU using numerical modelling, first data were taken on the G2 reactor block, located at CEA Marcoule and shut down in the early 1980s, from February 2020. These measurements demonstrated the potential of the technique, identifying differences between the  current structure of the G2 reactor and the 3D model created from the original plans of the installation. These initial results demonstrate the interest of using muography in the clean-up and dismantling of nuclear facilities, one of the CEA's  priorities nowadays. For the next phase of the project, a 3D tomography of the reactor is envisaged by combining images taken from different positions. It could  be the first 3D image of the interior of a reactor  at dismantling phase without using any artificial ionizing radiation. This will provide a new inspection tool to the existing palette.

Muography is a non-invasive imaging technique using muons from natural cosmic rays. Muons, having the ability to pass through large amounts of matter before being stopped, make this technique particularly interesting for the auscultation of large structures, such as buildings, archaeological objects (pyramids) or volcanoes. This technique was first proposed in the 1950s [1] and has been developed thanks to recent improvements in the detectors used for the identification and trajectography of particles in physics experiments. Thus, muography has become in recent years a competitive scanning technique for societal applications.

An IRFU team is  carrying out muographic studies since 2015 using telescopes based on micropattern gaseous detectors, called Micromegas, invented at CEA. Among the different muography techniques, the so-called transmission technique (studying the muon flux passing through the scannedobject) is the most commonly used and provides a 2D image of the average density of the object. The combination of this technique with these telescopes has already demonstrated its capacity to image building structures [2] and the pyramid of Cheops [3], which are inaccessible by other exploration techniques. 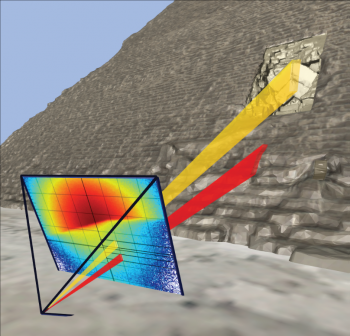 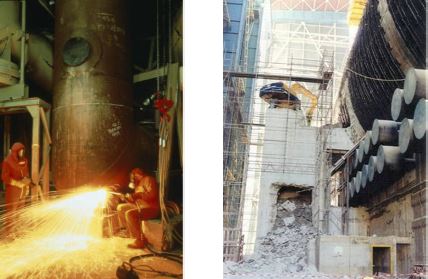 In 2017, the operator and the project manager of the CEA Marcoule G2/G3 dismantling project (DEM) wanted to evaluate the potential of muography for the auscultation of the G2 and G3 reactors. The G2 and G3 reactors are Uranium Natural Graphite Gas (UNGG) type reactors with the particularity of being both plutonigenic and electrogenic. They were commissioned in July 1958 (G2) and June 1959 (G3). They were definitively shut down in the early 1980s (February 1980 for G2 and June 1984 for G3). Operations to completely unload the fuel in the reactor vessels began as soon as they ceased to operate and the first operations to dismantle the support equipment (electricity production, CO2 cooling circuits, etc.) took place between 1986 and 1996. Since then, the reactors remain at a monitoring and maintenance phase in operational and safe conditions, waiting for their dismantling, which is scheduled to begin in 2042.

At present the most conventional techniques  to survey the interior of the civil engineering  of a facility are based on the use of radar or ultrasound. However, they are non-penetrating techniques. Particles such as muons, resulting from the interaction of a cosmic particle in the atmosphere, can pass through a large amount of matter and provide information on the internal structure of massive objects. In fact, these elementary particles can keep an almost straight trajectory by crossing a large amount of matter before being absorbed. By recording the direction of incidence of each muon passing through the reactor, muon detectors can distinguish zones of different densities.

The G2/G3 project has been defined in a collaborative way between the DES/DDSD and the DRF/IRFU to carry out a study of the potential of muography for the monitoring of the G2 and G3 reactors and meet the following  objectives:

To achieve these goals, the project was organized in two phases:

For the first phase, a Monte Carlo simulation tool dedicated to muography studies was developed. It uses the Geant4 software (a tool for simulating the passage of particles through matter). This tool has been developed to be able to implement geometries directly imported from 3D CAD models in order to perform detailed simulations of the studied object  (in this case the G2 reactor block) and, consequently, to increase the sensitivity to identify potential anomalies. The 3D model of the G2 reactor, managed by the Geant4 software, contains more than twenty-two thousand files (3.4 GB) and took about 12 months for its impementation (Figure 1).

Figure 1: Image of the G2 reactor at CEA Marcoule (a) and 3D model of the reactor implemented for the simulations (b). The red point shows the position of the muon telescope for the realization of the first measurement.

These simulations revealthat the centre of the base of the reactor (red point in Figure 1b) is the optimal place to make a first experimental measurement, and to obtain a global image. Carried out between February and July 2020 with a telescope with a 50 cm x 50 cm sensitive surface (Figure 2), the image obtained comes from more than eighteen million muons that passed through the G2 reactor.

Figure 2 : Muon telescope with an active surface of 50 cm x 50 cm installed under the centre of the G2 reactor for the first muography measurement (a). Detail of the equivalent simulation with the trace of few muons when arriving at the muon telescope after passing through the G2 reactor (red traces) (b).

The number of muons detected depends on the density of the material crossed. Moreover, the muon flux  has a well known angular distribution (which is not only  perpendicular to the detection surface plane). Thus, the final goal is to generate a 2D image representative of the density from the muons but corrected   by their angular distribution. The raw image comes from the reconstruction of the direction of the muons allowing to have a 2D map with the number of muons collected in each direction, which is equivalent, at first order, to the linear density by the correction of  this image  by the muon distribution (Figure 3a). This image was analyzed by comparing it with another produced by an equivalent simulation (Figure 3b). The comparison of these two maps already shows two positions where the results of the measurement are not compatible with the simulation (Figure 3c). A more detailed study reveals the regions where these discrepancies exist (Figure 3d). In both cases, an excess of muons is observed in the simulation compared to the real data. This excess corresponds to reactor components that were not defined in the 3D model or were defined with a lower density than the reality. It concerns the tubes of the loading block (Figures 3c and d - anomaly 1), the tubes of the unloading block and part of the fuel element gravity unloading chutes (Figures 3c and d - anomaly 2). 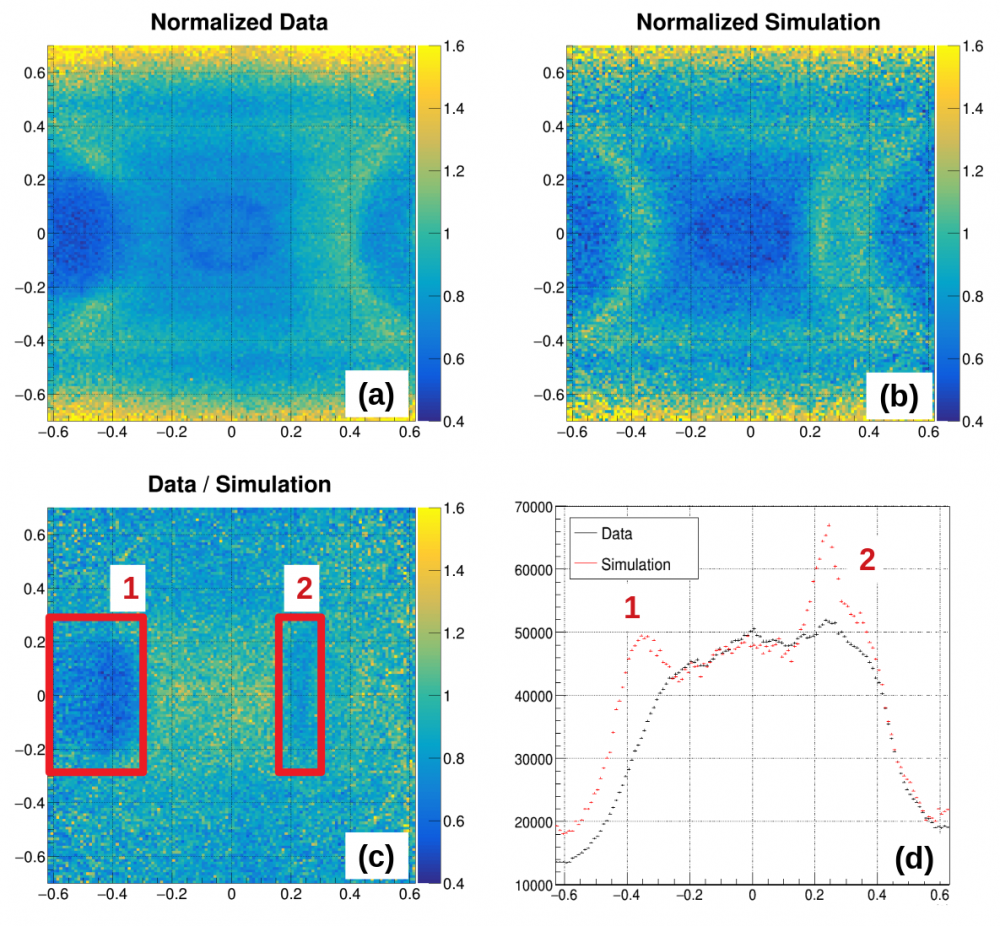 Figure 3: 2D image of the reactor obtained from the experimental measurement (a) and an equivalent simulation (b). Ratio between the experimental measurement and the simulation (c), two anomalies corresponding to excesses of muons detected in the simulation with respect to the data are identified (red squares 1 and 2). The same anomalies are identified with a projection of the comparison in 2D (d).

Following the detection of these anomalies, an additional study was carried out by 2 engineers of the DEM G2/G3 project team during six months to verify the 3D model of the G2 reactor with the plans dating from its construction in 1958 (more than 1700 plans). This study allowed to identify the same  anomalies on the 3D model as those detected by the muography. Hence, these results  fully demonstrate the potential of muography.  They also make it possible to verify the conformity of the construction of the G2 reactor to the plans dating from its construction.

New perspectives for the G2/G3 project

These initial encouraging results obtained by the DES/DDSD and IRFU teams made it possible to extend the project to a third phase. This should consist of the deployment of four telescopes with a total active surface of 1 m2 around the G2 reactor in order to carry out muography measurements from different points of view. The objectives of these measurements are to complete the detection of anomalies and, additionally, to know the state of the internal structures of the reactors, in particular, after more than 30 years of irradiation. These objectives can be achieved by combining several 2D images. In a first step, 9 positions are considered around the reactor in which the four telescopes will be installed (Figure 4). With reconstruction techniques mainly used in medical imaging, these 2D images will be combined, which will lead to a 3D tomography of the reactor. Studies of this type have already been carried out by the IRFU team using a limited number of 2D images, with encouraging results [4]. With this project, the very first 3D image of the interior of a reactor could thus be obtained thanks to muography. In parallel, the 3D model of the reactor will be updated to be consistent with the real state of the G2 and G3 reactors. Simulations based on this new 3D model will allow more precise analyses and the improvement of the sensitivity of anomaly detection. 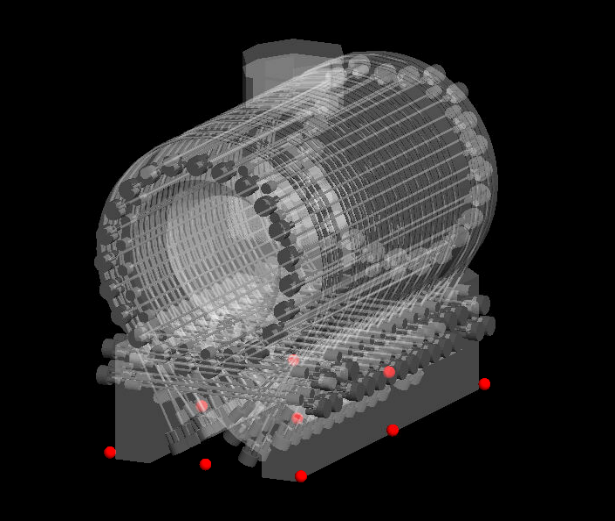 Figure 4: 3D model of the reactor with the 9 positions where the four telescopes will be installed (red dots) in order to reconstruct the 3D image of the reactor.