Grains do form in the interstellar medium... except in the youngest galaxies

An international team led by several researchers from LFEMI/DAp/CEA has just published a study shedding light on the formation mechanisms of interstellar grains in galaxies. This is one of the key results of the European DustPedia collaboration, which brings together some thirty people from six laboratories: the DAp at CEA-Saclay, the IAS at Orsay, the University of Ghent, the University of Cardiff, the Observatory of Florence and the Observatory of Athens.

Interstellar grains are small solid particles of submicron size, mixed with the gas filling the space between the stars in a galaxy. Although they represent only about 1% of the mass of the gas, they play a fundamental role in the physics of the interstellar medium. In a galaxy like the Milky Way, they absorb ~30% of the stellar radiation and re-emit it in the infrared. This fraction can be as high as 99% in galaxies with star formation outbreaks. In addition to this energetic role, the grains are also responsible for heating the neutral gas by photoelectric effect. From a chemical point of view, they act as a catalyst for the formation of several molecules, including the most abundant in the Universe, dihydrogen. Finally, grains are a crucial ingredient in the star formation process. They allow the gravitational energy of collapsing clouds to be radiated away, and protect the molecules that have formed in them. Understanding the physics of grains is therefore essential for understanding both the evolution of galaxies and the origin of the molecular complexity that gives rise to life. The problem is that the properties of these grains, such as their chemical composition and size distribution, are still poorly understood. 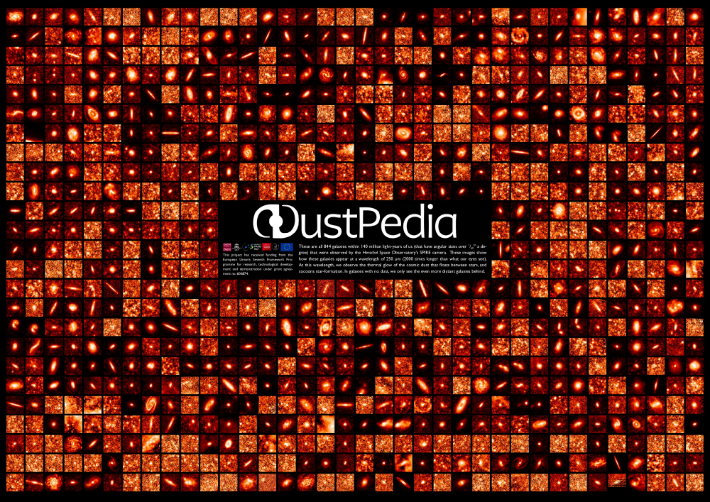 DustPedia sample (844) galaxies. These images are observations at 250 microns, obtained with the a href="http://irfu.cea.fr/en/Phocea/Vie_des_labos/Ast/ast_technique.php?id_ast=2267">Herschel space telescope, a mission in which the DAp has been very involved. In particular, the bolometers of one of its instruments, PACS, were developed at CEA.

he paper, which has just been published in the May 2021 issue of Astronomy & Astrophysics, looked at 800 galaxies in the DustPedia sample (see image opposite). The modelling of these galaxies has made it possible to understand how their dust mass varies as a function of their metallicity, a parameter quantifying the fraction of elements heavier than helium in their interstellar medium. Metallicity thus quantifies the chemical age of galaxies. This empirical data, linking the dust content of galaxies to their state of chemical evolution, has made it possible to constrain the time scales of the main processes responsible for the evolution of grains: (i) their formation in supernova ejecta; (ii) their growth in the interstellar medium; (iii) their destruction by shock waves.

he results obtained show that the grains are mainly formed in the interstellar medium (see figure opposite). Only very low metallicity galaxies have their dust content formed mainly by supernovae. These results are particularly enlightening, as several recent statistical studies have ambiguously concluded that supernovae formation should dominate in all systems, although this process does not explain the spatial variations in the dust content of the Milky Way. This accurate estimate of the characteristic time scales of grain evolution can already be incorporated into simulations of galaxy evolution. This is all the more important because when we go back to the origin of the Universe, i.e. at high redshift, the metallicity of galaxies decreases on average. For example, knowing the evolution of the dust content of a galaxy as a function of time is necessary if one wants to synthesise various observables from simulations. These observables can be images of galaxies or ray flux predictions. 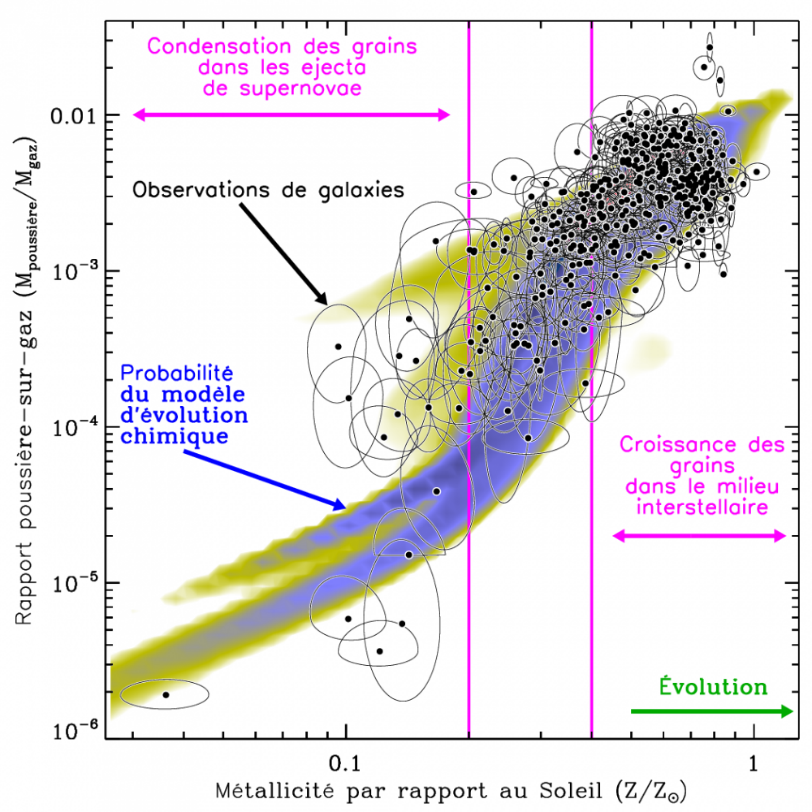 Modelling the evolution of grains. The points with an uncertainty ellipse represent the measurements on each galaxy. The contours (yellow-blue-red) represent the probability density of the grain evolution model, constrained from the data. This model allows us to delineate the two main regimes of grain production: (i) condensation in supernova ejecta; (ii) growth in the interstellar medium (Galliano et al., 2021; https://doi.org/10.1051/0004-6361/202039701).