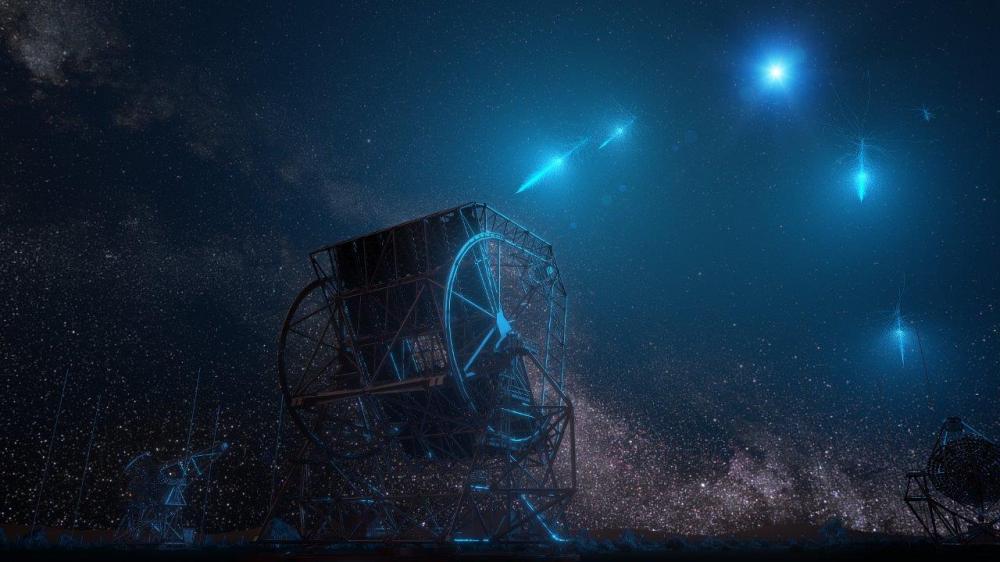 Artist's impression of very-high-energy photons from a GRB entering Earths’ atmosphere and initiating air showers that are being recorded by the H.E.S.S. telescopes. Credit: DESY, Science Communication Lab

On 29 August 2019, scientists from the H.E.S.S. collaboration recorded one of the brightest cosmic explosions ever observed in the Universe. This gamma-ray burst emitted the most energetic photons ever detected in this type of event. Under the direction of Irfu researchers, the observations continued for several days. The analysis of the data collected calls into question the origin of the rays produced during the explosion. These results has been published  by the international team, which includes researchers from CEA and CNRS, in the journal Science on 4 June 2021.

H.E.S.S., located in Namibia, is a system of five imaging atmospheric Cherenkov telescopes that has been studying cosmic rays since 2003. In 2016, the cameras of the first four telescopes were completely refurbished using state-of-the-art electronics and in particular the NECTAr readout chip designed by the the DEDIP/Irfu laboratory.

The analysis of this exceptional gamma-ray burst was led by a physicist from the DPHP/Irfu astroparticle group.

"Gamma-ray bursts are luminous flashes of X-rays and gamma rays observed in the sky, emitted by distant extragalactic sources," explains Edna Ruiz Velasco of the MPIK in Heidelberg, Germany, one of the corresponding authors of the paper. "These are the most violent explosions in the Universe and those that last longer than a few seconds are likely to be associated with the collapse of a massive star into a black hole.” 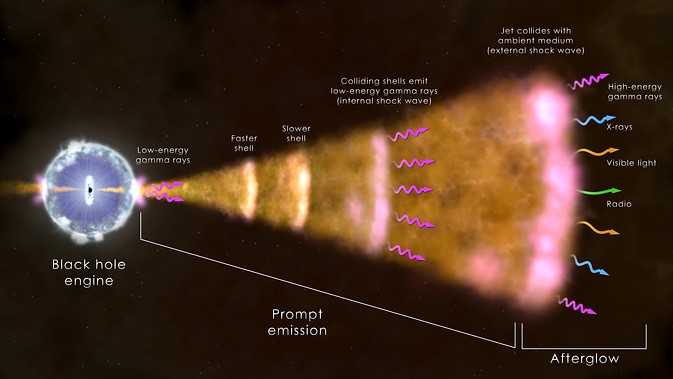 The different stages of the fireball model often used to describe the emission of gamma-ray bursts. Credit: NASA. 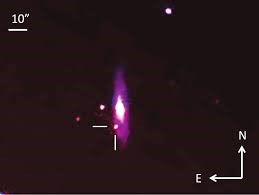 The GRB19829A burst was detected by the Fermi and Swift space observatories on 29 August 2019. The burst itself was not exceptionally bright. However, it was located in a relatively nearby galaxy: its redshift was measured by the GTC optical telescope at z= 0.0785 (corresponding to ~1.1 billion light years). The detection of such a close gamma-ray burst is an exceptional and rare event. For comparison, typical bursts are about 20 billion light-years away.

The team captured the afterglow of the explosion as soon as it became visible to the H.E.S.S. (High Energy Stereoscopic System) telescopes in Namibia. "The signal was strong enough to be detected immediately! This allowed us to quickly inform the international community," notes Fabian Schüssler of CEA-Irfu, who coordinates the team in charge of analysing this gamma-ray burst.

H.E.S.S. observed the GRB190829A burst the night after its detection by space instruments and immediately detected a very high energy gamma-ray signal.
Under the leadership of Irfu researchers, observations continued for several days and analyses revealed that the signal was visible for three consecutive days with statistical significance of 21.7 σ, 5.5 σ and 2.4 σ. The data obtained by H.E.S.S. thus cover the period from 4 hours to 56 hours after the detection of the burst. A record! Another record is set by the energy of the gamma rays: up to 3.3 TeV! This has never been seen before from a gamma-ray burst. These observations have therefore firmly established the presence of very high energy gamma rays in the afterglow of gamma-ray bursts.
But like all scientific discoveries, they have also opened up new questions: how are these high-energy photons created? The theoretical models most commonly used until now are unable to reproduce the observations and must be modified...

The analysis of the GRB190829A observations with H.E.S.S. has established four main outstanding results:

"H.E.S.S. was able to follow the afterglow up to three days after the initial explosion" explains Fabian Schüssler. The result was surprising: the observations revealed curious similarities between the X-ray and high-energy gamma-ray emissions of the afterglow. Contrary to established theories that assume that the two components of the emission must be produced by separate mechanisms, the observations of the GRB 190829A afterglow show that the X-rays and gamma-rays decreased in a synchronised manner. Moreover, the gamma-ray energy spectrum clearly corresponds to an extrapolation of the X-ray spectrum. These results indicate that the X-rays and the very high energy gamma rays of this afterglow were produced by the same mechanism and at the same time.

"The significance of this possibility underlines the need for further studies on the afterglow emission of very high-energy gamma-ray bursts" notes Mathieu de Naurois, deputy director of the H.E.S.S. observatory and researcher at LLR, France.

GRB 190829A is only the fourth gamma-ray burst detected from the ground. However, the previously detected explosions occurred much further out in the Cosmos and their afterglow could only be observed for a few hours each and not at energies above 1 tera-electronvolt.

The prospects for detecting gamma-ray bursts with next-generation instruments look promising: scientists expect regular detections in the very high-energy band to become commonplace with improved instruments, which will help to fully understand these gargantuan cosmic explosions.