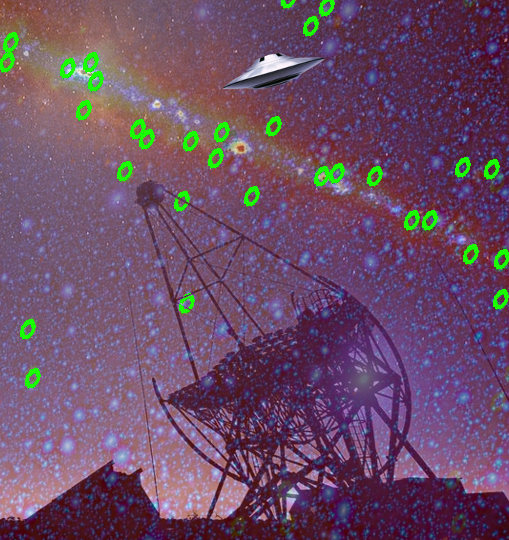 Composite image showing one of the H.E.S.S. telescopes (Namibia). In the background is visible the plane of the Milky Way on which are superimposed the sources detected by H.E.S.S. The unidentified Fermi sources are materialized by the green circles and the distribution of the sub-halos of galactic dark matter predicted by the cosmological simulations (Aquarius simulation) by the bluish halos. © CEA/E.Moulin

Space-based experiments such as the Fermi satellite's Large Area (LAT), which detects gamma rays above 100 MeV, reveal a population of sources with no astrophysical counterpart at other wavelengths. Some of these have the characteristics required to be "dark matter subhalo" candidates predicted by cosmological simulations to populate the Milky Way halo. The range of dark matter candidates with masses below a few hundred GeV are already excluded by Fermi observations. To test the higher masses, higher energy range observations are needed and the H.E.S.S. ground-based Cherenkov telescope array is the ideal instrument. Thus, a team of physicists from Irfu and laboratories in Heildelberg and Tübingen conducted a thorough selection of some of the most promising objects to be observed by H.E.S.S. to elucidate their possible identification as 'dark matter subhaloes' at TeV. The H.E.S.S. results exclude this interpretation for dark matter particles in the TeV range.  This work was published in the Astrophysical Journal in July 2021 (arxiv link).

Background on the search for dark matter in the cosmos

About 85% of the total matter content of the Universe is believed to be in the form of dark matter. Despite its existence postulated as early as the 1930s, the fundamental nature of dark matter remains mysterious to this day / elusive. Among the most promising particle candidate are WIMPs: massive particles that interact weakly with matter. Many experimental efforts have been made to probe the non-gravitational interactions of these particles, such as their direct production at particle colliders like the LHC at CERN, their direct detection when they collide with nuclei in multi-ton detectors placed in underground laboratories, or indirect detection via their annihilation products by satellite and ground-based telescopes. 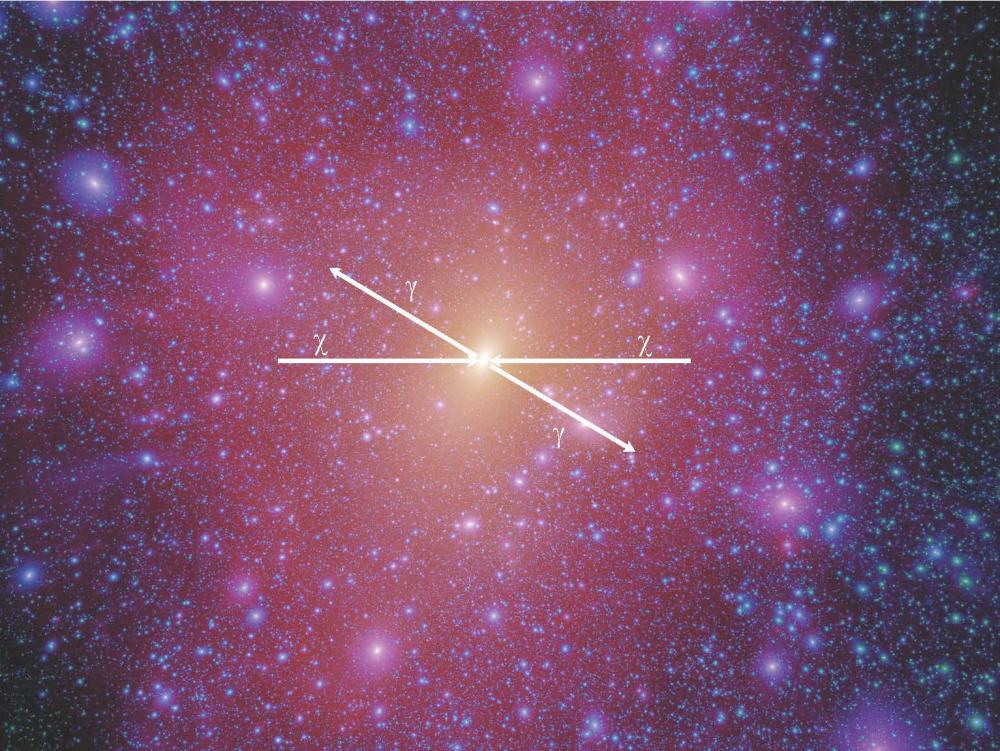 In the standard model of cosmology, dark matter particles in the primordial Universe tend to form bound systems by gravitational collapse (see animated video). These systems subsequently merge to form the first subhaloes of dark matter, which then merge with others to form increasingly massive haloes. This process of hierarchical structure formation produces dark matter halos that are massive enough to trap gas (ordinary matter) and trigger the star formation process, giving rise to the galaxies we see today. However, most dark matter subhaloes remain optically invisible. However, if the dark matter consists of sufficiently massive WIMPs, these particles could annihilate there by emitting very high energy gamma rays (E>100 GeV) and be detectable by the H.E.S.S. Cherenkov telescope array.

The search for dark matter signals is focused on the hundred or so gamma-ray sources classified as unidentified sources, with no astrophysical counterpart, revealed by 12 years of wide-field observation of the sky by the LAT instrument on board the Fermi satellite. A selection of unidentified sources has been carried out to determine the most promising of them as potential dark matter sub-halos composed of particles with masses of beyond a few hundred GeV. The H.E.S.S. collaboration has carefully selected three of these objects and conducted an observational campaign with its network array of ground-based Cherenkov telescopes. 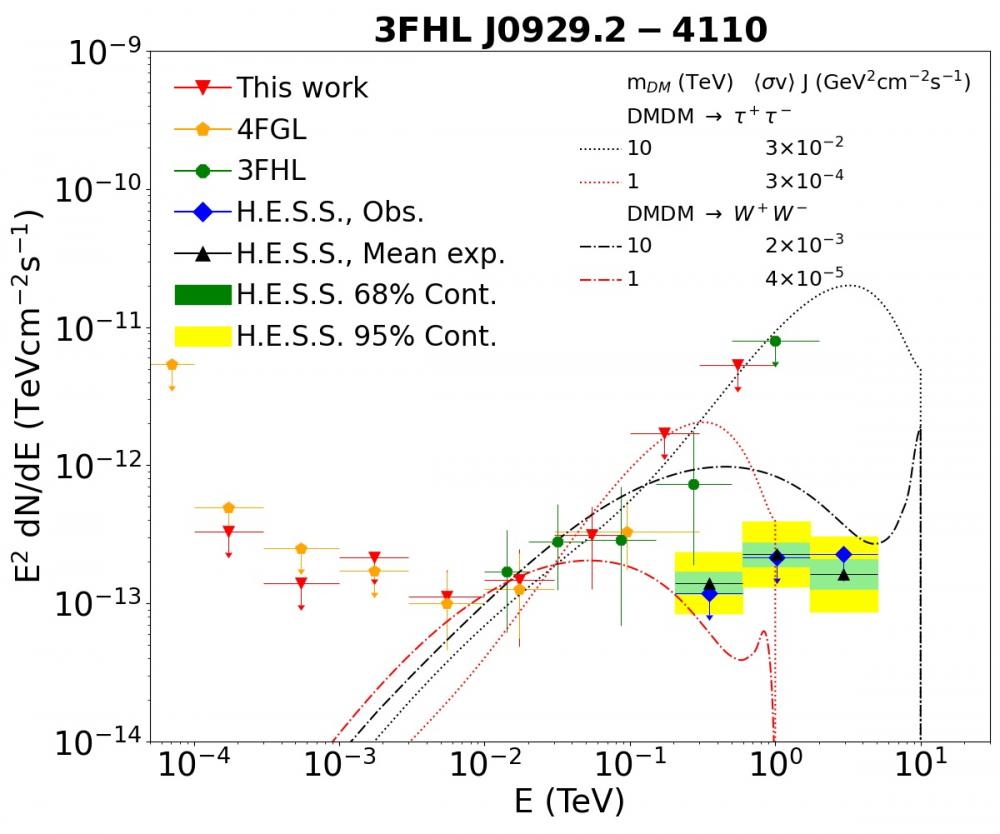 Energy spectrum of an unidentified Fermi source. The points correspond to the differential energy flux measured by Fermi-LAT in this work (red triangles) and those extracted from the Fermi-LAT catalogues 4FGL (orange pentagons) and 3FHL (green dots). The vertical error bars correspond to the statistical error at 1 sigma. The upper limits (red, orange and green arrows) are given at the 95% confidence level. The upper limits in fluxes obtained by H.E.S.S. are calculated at 95% confidence level (blue arrows). Superimposed are the fluxes predicted by theoretical models for the annihilation of 1 and 10 TeV dark matter particles in the W+W- (dashed lines) and ?+?- (dotted lines) annihilation channels. © H.E.S.S. collaboration

The figure above shows the spectral energy distribution for one of the sources observed by H.E.S.S.. The upper limits on the flux expected and observed by H.E.S.S. are shown (blue dots and arrows at high energies) as well as the fluxes obtained by the Fermi satellite observations (green, red and orange dots and arrows). Examples of spectra from dark matter models are superimposed (for 2 annihilation channels and 2 possible masses of 1 or 10 TeV).
Assuming that the sub-halos are composed of WIMPs thermally produced* in the primordial Universe, the H.E.S.S. results impose even stronger constraints than Fermi on the measured gamma-ray emission of these objects as coming from the annihilation of TeV dark matter particles  in dark matter sub-halos.

The combined data from the three unidentified sources (3FHL J0929.2-4110, 3FHL J1915.2-1323 and 3FHL J2030.2-5037) can be used to test the statistical plausibility/compatibility/likelihood of the dark matter interpretation (TS**). Thus, the figure below shows (in black) the mass range of the dark matter particles allowed by the Fermi data, which depends on the amount of dark matter present along the line of sight (J*** factor) but also on the decay annihilation channel (τ+τ- in the present case: the dark matter particles annihilate into tau pairs, which give rise to gamma rays in the final state after decay and/or hadronisation of the particles produced in the annihilation process). The H.E.S.S. results allow to exclude a very large part of the still allowed domain (everything above the green curve is excluded) and thus rule out the hypothesis of dark matter subhalos at TeV. 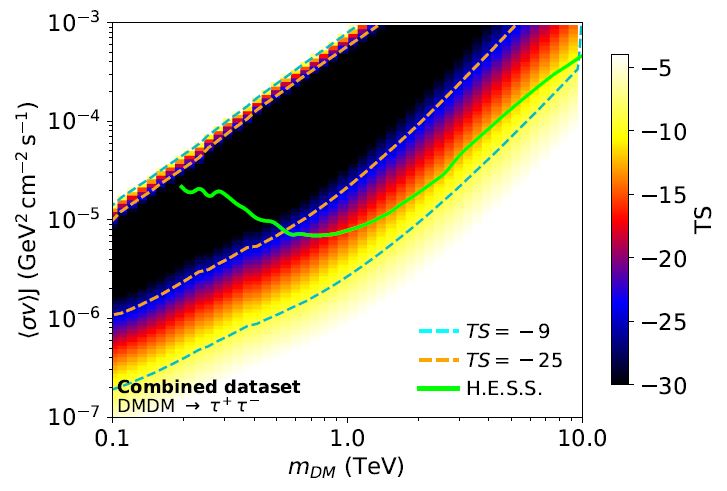 Statistical test values (TS*) calculated on the combined data sets of the 3 unidentified sources from the Fermi-LAT observations. The more negative TS is, the better the agreement with the data. The contours of the statistical likelihood (SL) values are given in the J-factor plane as a function of the mass of the dark matter particle (mDM) for the ?+?- annihilation channel assuming the annihilation cross-section value for thermally produced WIMPs*** in the primordial universe. ©H.E.S.S. collaboration

The measured UFO energy spectra  require large concentrations of dark matter and objects relatively close to the observer . This combination, which is characterised by large J-factors, happens to be very rarely obtained in cosmological simulation predictions for galaxies like the Milky Way and is subject to large uncertainties.  The new constraints provided by H.E.S.S. are now the most relevant and, in the framework of cosmological models, they exclude the interpretation of unidentified Fermi sources as galactic subhaloes of dark matter at TeV.

*At a primordial plasma temperature higher than their mass, dark matter particles are created and destroyed in free pairs. The Universe cools, and when the temperature of the Universe is lower than their mass, dark matter particles are no longer created and their relative density decreases due to the annihilation process. The universe continues to expand and their density is then frozen when the expansion rate of the universe is greater than the annihilation rate. This production process is usually called thermal production.
**The  test statistics ( TS) is defined as the difference in the logarithm between the likelihood functions for the source and no-source hypotheses. Negative values of the  TS correspond to the detection of a source that improves the description of the data compared to the no-source hypothesis. Assuming that TS behaves like a chi2 distribution, TS = -25 corresponds to a 5 sigma detection.
***The J factor describes the amount of dark matter particle annihilation in an astrophysical environment with a dark matter distribution at a given distance from the observer. It is defined as the integral of the dark matter density squared integrated over the line of sight and  the solid angle of observation.