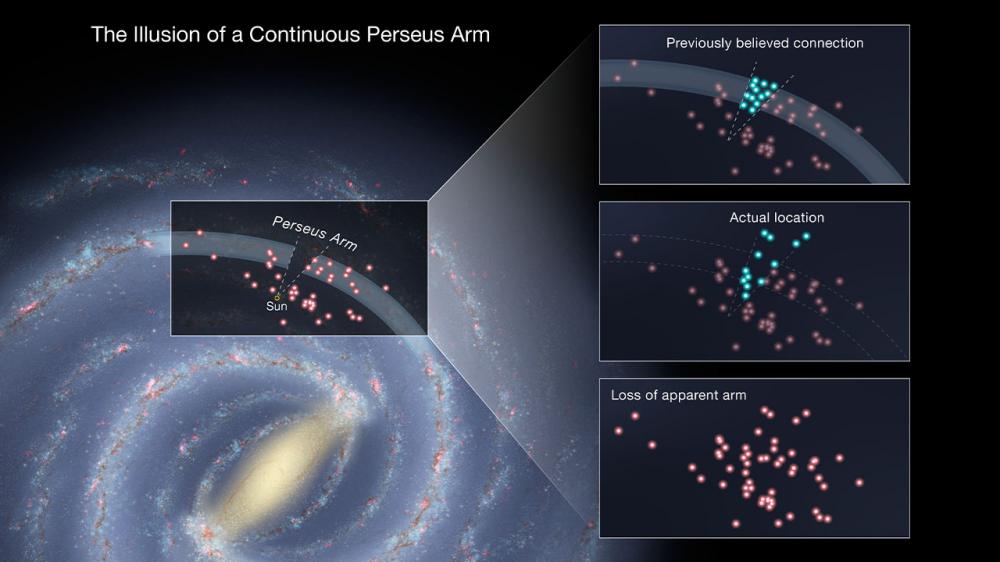 Representation of the Milky Way structure, as we would see it if we could observe it from outside. Top-right inset : the shaded regions shows the expected position of the Perseus arm, demarcated by a combination of masers (pink dots) and interstellar clouds (blue dots). Middle-right inset : new measurements of the distance to the interstellar clouds are showing a much more scattered and less well-define structure.

The Milky Way is a spiral galaxy. If we could travel out of it we would probably observe a flat disk with spiral arms connected to its central core. Stuck inside the Milky Way, with no bird's eye view and limited precise distance measurement to interstellar clouds, the exact shape of the Galaxy spiral pattern is difficult to assess and remains not well known.

For decades the astronomers have used several methods to infer the Milky Way large scale structure, and observations have led us to believe that it is likely to be a Grand Design spiral with long, thin and well defined arms like Messier 81. But a recent study of a team including a member of the IRFU Astrophysics Departement is challenging this vision.

These new results are showing that a section of one of the most well know spiral structure of the Milky Way, the Perseus arm, is not as regular and organised as it was thought. Based on the cross-analysis of several observational databases, this study provides precise measurements of the distance to 81 interstellar clouds in a specific section of the putative Perseus arm. By locating interstellar matter in three dimension, the authors reveal a much more perturbed and scattered structure, indicating that the continuous Perseus arm structure previously infered from observations might have been the result of a projection effect, an illusion predicted by W. Burton in 1971.

A great challenge in mapping the structure of the Milky Way is measuring distances to objects. If stars and interstellar clouds were to rotate perfectly around the centre of the Galaxy, it would be possible to estimate the distance to objects simply by measuring their position on the sky and their velocity with respect to us. In this perfect model, interstellar clouds located in a spiral arm would align on specific tracks in a longitude-velocity diagram (see Figure on the right). This relies on the strong hypothesis that random and turbulent motions of clouds are small.

Recently, using direct measurement of distance to stars by the Gaia satellite (parallax method) combined with large catalogs of extinction measurements to these same stars, scientists have been able to reconstruct the three-dimensional structure of interstellar dust in the Solar neighborhood, up to distance of 2-3 kpc (e.g. Green et al. 2019).

Combining this 3D information of the structure of interstellar matter with a large catalog of molecular clouds for which the velocity of each cloud is measured, the authors of the current study were able to study in detail the link between the apparent Perseus arm infered from the Galactic rotation, and its true structure in three dimensions. 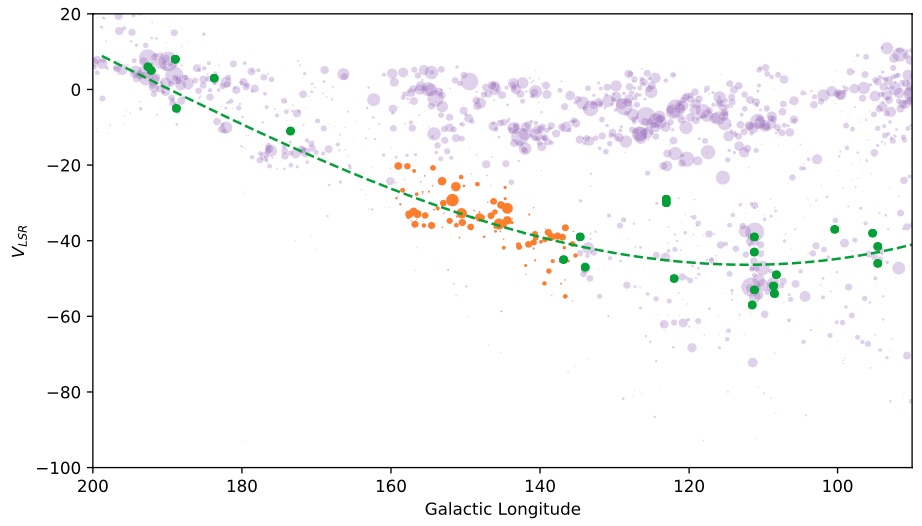 Longitude-velocity diagram often used to identify spiral arms of the Milky Way. The green dashed line indicate the expected position of the Perseus arm in this representation. The green dots are High-Mass star forming regions (masers) with well known distances. The circles represent molecular clouds from the catalog of Miville-Deschênes, Murray & Lee (2017): in orange are the 81 clouds used in this analysis, in purple the other clouds. 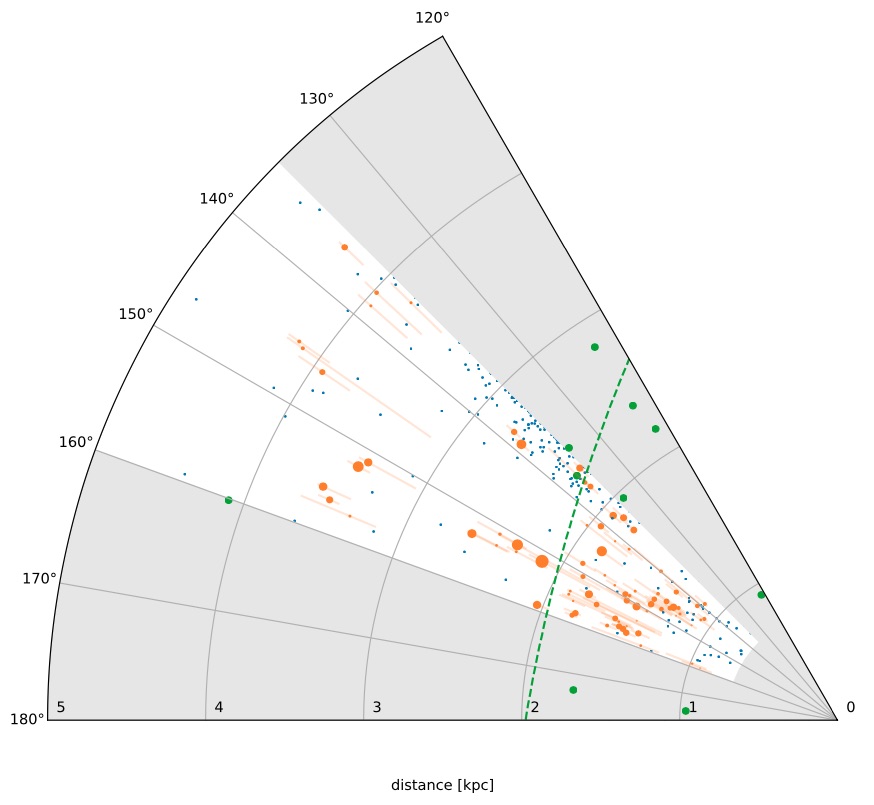 Distribution of 81 molecular clouds (orange dots) for which a distance could be estimated using a comparison with the 3D distribution of interstellar dust constructed using data from the Gaia satellite. The shaded area where not studied here. The dashed line indicate the expected position of the Perseus arm. High-mass star forming regions (masers) are shown as green dots. Stars with acurate distances (>5 sigma) are shown in blue. The clouds, like the stars, do not show a concentration at the expected distance of the Perseus arm.

Even though molecular clouds studied here are delineating a spiral arm pattern when their distances are infered from their apparent velocities (these clouds are aligned on a spiral track in the longitude-velocity diagram), this new study reveals that their distribution in real space is much more scattered, to a point where it becomes difficult to identify the Perseus arm itself. Indeed, in the longitude range studied here (135 < l < 160 degrees), the 81 molecular clouds identified are not concentrated at the expected distance of the Perseus arm. They are rather distributed over a distance of more than 3 kpc (10 000 light-years). The authors of this study suggest that the outer part of the Milky Way could be more similar to Messier 83 with short and fragmented spiral arms.

These new results were obtained on a small section of the Galactic plane. The method used here could be generalised to a larger volume and provide a cleared view of our representation of our Galaxy in real space.

This study is published in The Astrophysical Journal :
Burton’s Curse: The Impact of Bulk Flows on the Galactic Longitude-Velocity Diagram and the Illusion of a Continuous Perseus Arm