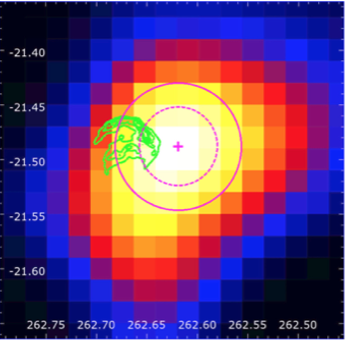 Gamma-rays to complete the color palette

Some stars can end their lives cycle in a gigantic explosion combined with a large increase of its luminosity which, viewed from Earth, gives the impression to observe a new star appearing in the sky as it occurred in October 1604. Four centuries later, a team of researchers has detected gamma-ray emission from this region of the sky. Previously this supernova remnant had been observed at multiple wavelengths including radio, infrared, optical, and X-rays (see Figure below) and gamma-ray light was the only color missing in the puzzle. Each wavelength reveals different, yet complementary, information on the object.

By using twelve years of Fermi-LAT data, the team of researchers has demonstrated the existence of an efficient particle acceleration in this remnant and characterized the nature (electrons or ions) of the particles being accelerated in the shock. As 99% of the cosmic-rays are ions and 1% electrons, it is crucial to verify that the supernova remnants can indeed accelerate both types of particles. To probe the existence of accelerated ions, one can search for the gamma-ray emitted when these particles collide with the surrounding gas. In this context, the Kepler supernova remnant is a great target as it is known that part of its shock wave is interacting with dense material (dashed line in the figure below) released by the progenitor system before the explosion.

, B, C, D panels : a multi-wavelength view of the Kepler supernova remnant (SN 1604) as observed in radio (VLA at 4.85 GHz), in infrared (Spitzer telescope at 24 μm), in optical (Hubble Space telescope around Hα, [NII] and [OIII] lines), and in X-rays (Chandra telescope between 0.7 and 1 keV). The dashed lines illustrate the interaction region of the shock with the circumstellar interaction (image adapted from Vink, 2017).  Right panel: result of the Fermi-LAT data analysis. The image shows a map of the gamma-ray emission overlaid with the infrared contours of the SNR in green (the LAT telescope has an intrinsic lower spatial resolution compared to other wavelengths). The circles represent the most likely localization of the gamma-ray emission with different confidence levels.

By combining the spectral information obtained at radio, X-ray, and spectra from the Fermi-LAT (Giga-electron volt gamma-rays) and H.E.S.S. telescopes (Tera-electron volt gamma-rays), the team of researchers has concluded that the gamma-ray emission is most likely dominated by the emission of accelerated ions interacting with the dense circumstellar material. Evidence that young supernova remnants, like Kepler, can indeed accelerate a fraction of the galactic cosmic-rays, in particular ions, by harnessing 5 to 10% of the explosion’s kinetic energy to accelerate particles at the shock wave.

The effect of the magnetic field

Being one the most studied supernova remnant, the majority of the modeling parameters are well known for this object with the exception of the magnetic field amplitude in which accelerated particles evolve.

The prediction of both models will soon be tested with the future ground-based very high energy gamma-ray telescope array, the Cherenkov Telescope Array (CTA), which has a much better sensitivity and localisation capability than its predecessors (H.E.S.S., MAGIC, VERITAS experiments).

This supernova holds a special place in astronomical history as it is one of the rare supernovae that has been visible to the naked eye and for which written records have been found. On a night of October 1604, a new star, a "Stella Nova", brighter than Jupiter, appeared in the sky. It was even visible during the day for a few weeks and visible at night for over a year. The celestial event was observed by many around the globe and records exist from European, Chinese, Korean, and Arabic astronomers. This was not a newborn star but the last sign of a dying star: a supernova (SN). Among astronomers, the most detailed description of the event was produced by the German astronomer Johannes Kepler in his report “De Stella nova in pede Serpentarii” (On the new star in Ophiuchus's foot). Kepler’s name is now attached to the SN and its remnant (SNR). Note that this is the last galactic supernova that was visible from Earth to the naked eye and although we expect ~2 SNe/century in our Galaxy, we haven't seen one in the last 400 years. Look at the sky tonight, it could happen any time! 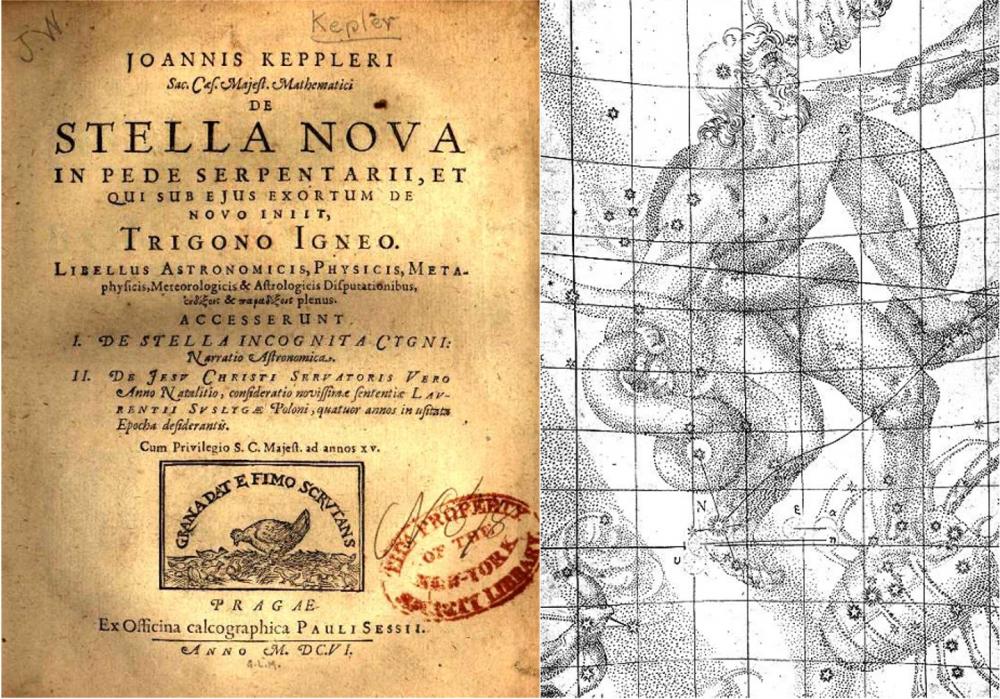 Left: De Stella Nova, the report from Johannes Kepler describing the supernova visible to the naked eye in the year of 1604. Right: drawing depicting the location of the stella nova, marked with an N in the foot of the Serpens constellation.

“Characterization of the GeV emission from the Kepler supernova remnant” ,
Fabio Acero, Marianne Lemoine-Goumard, Jean Ballet, accepted for publication in the journal   Astronomy and Astrophysics
https://arxiv.org/abs/2201.05567