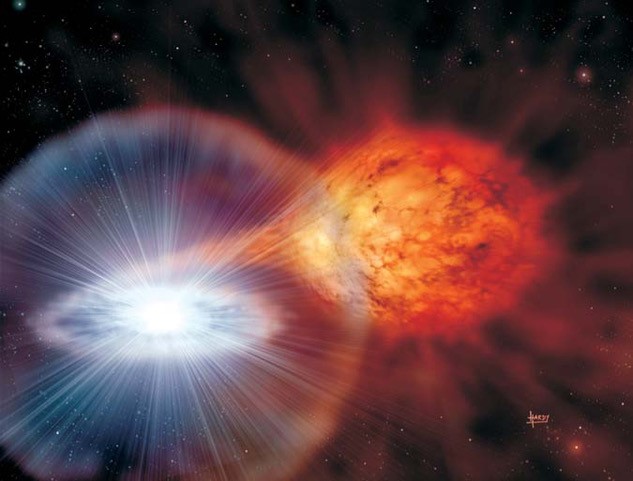 IRFU scientists and the H.E.S.S. collaboration observe time-dependent particle acceleration in our Galaxy for the first time. Novae are powerful eruptions on the surface of a white dwarf in a binary star system, in which a larger star and a smaller star orbit each other. A nova creates a shock wave that tears through the surrounding medium, pulling particles with it and accelerating them to extreme energies. The H.E.S.S. high-energy gamma-ray observatory in Namibia has now been able to observe this acceleration process for the first time. Surprisingly, the detected nova seems to cause particles to accelerate at energies reaching the theoretical limit.

These results were published in Science: https://www.science.org/doi/10.1126/science.abn0567

Nova events occur when the old, very compact stars known as white dwarfs gather material from a massive companion star due to its gravity. Some novae are known to repeat. These recurrent novae are the result of thermo-nuclear explosions on the surface of the white dwarfs. RS Ophiuchi is one of these recurrent novae; there is an explosion on its surface every 15 to 20 years. High energy  gamma rays from novae were detected only in the last decade. ‘The two stars forming the system are at approximately the same distance from each other as the Earth and the Sun,’ explains Alison Mitchell, researcher at FAU (Erlangen, Germany) and principal investigator of the H.E.S.S Nova programme. ‘When the nova exploded in August 2021, the H.E.S.S. telescopes allowed us to observe a galactic explosion in very-high-energy gamma rays for the first time,’ she continues.

The outbreak of the nova RS Ophiuchi was first seen and reported by amateur astronomers. The success of the H.E.S.S. observation was due in no small part to their initial report and the subsequent rapid reaction of researchers and the global astronomical community, paving the way for extensive subsequent observations. ‘These observations are a great example for the mutual benefit of close collaborations between professional astronomers and astronomy enthusiasts’ says Fabian Schussler, researcher at IRFU / CEA Paris-Saclay and head of the “Transients program” of the H.E.S.S. experiment. “Many transient phenomena, incl. nova explosions, are comparably bright and can thus be observed with relatively limited equipment. But the emission then fades rapidly, often within a few days. Rapid reaction and exchange of information is thus crucial to gather as many observations as possible”. To keep track of these exciting phenomena and in order to improve global follow-up campaigns, Fabian Schussler and his team developed Astro-COLIBRI, a novel and open platform that helped the members of the community to schedule detailed observations on RS Ophiuchi.

Two maps from H.E.S.S. observations of the nova: one showing the emission just after the start of the explosion, the other a few weeks later. © Collaboration H.E.S.S.

The H.E.S.S. team analysing the obtained data realized that particles were accelerated to energies several hundreds of times higher than previously observed in novae. This effect had been predicted in 2007 by Vincent Tatischeff from IJCLAB and Margarita Hernanz from Barcelona. Additionally, the energy released as a result of the explosion was transformed extremely efficiently into accelerated protons and heavy nuclei, such that the particle acceleration reached the maximum energie calculated in theoretical models. According to Ruslan Konno, one of the lead authors of the study published in Science and a doctoral candidate at DESY (Zeuthen, Germany), ‘The observation that the theoretical limit for particle acceleration can actually be reached in genuine cosmic shock waves has enormous implications for astrophysics. It suggests that the acceleration process could be just as efficient in their much more extreme relatives, supernovae.’ 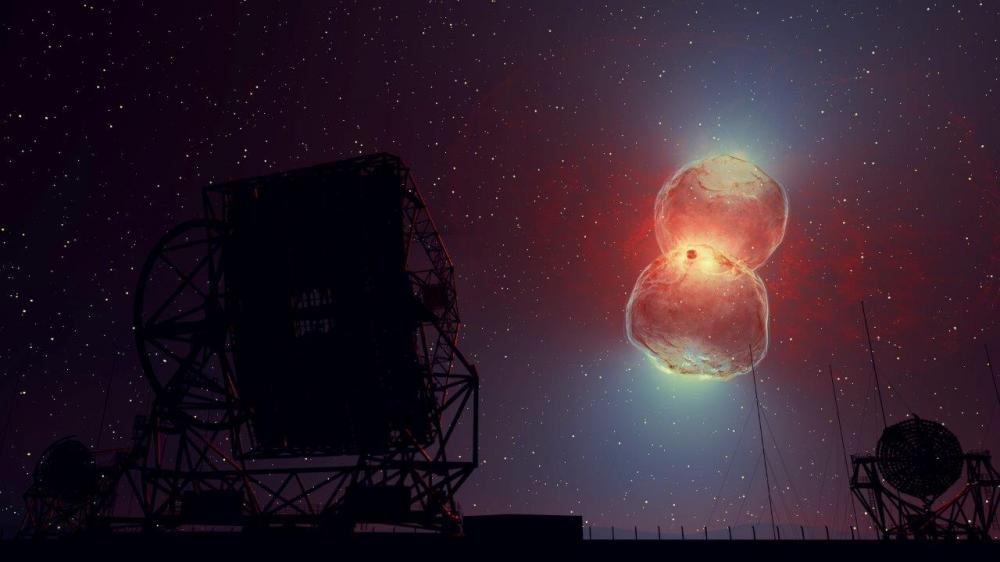 Artist impression of very-high-energy photons from a GRB entering Earths’ atmosphere and initiating air showers that are being recorded by the H.E.S.S. telescopes. © DESY, Science Communication Lab 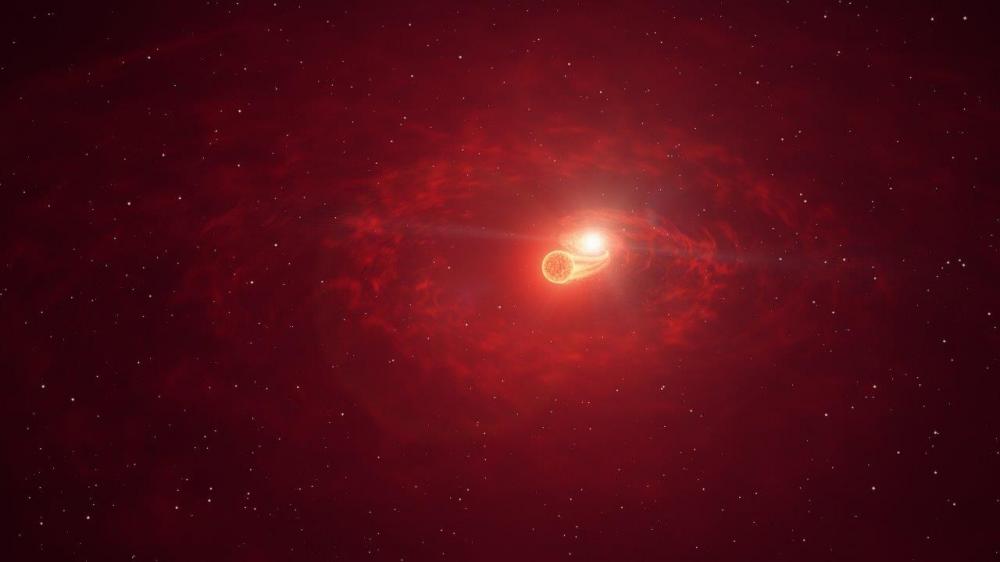 X-rays from the GRB were detected by NASA's Swift satellite in Earth's orbit. Very-high-energy gamma rays entered the atmosphere and initiated air showers that
were detected by H.E.S.S. from the ground (artist’s impression). © DESY, Science Communication Lab

During the eruption of RS Ophiuchi, the researchers were able for the first time to follow the development of the emission in real time, allowing them to observe and study cosmic particle acceleration as if they were watching a film. Using the highly sensitive H.E.S.S. telescopes, they were able to measure very high-energy gamma rays starting the day after the onset of the explosion and up to one month later. ‘This is the first time we have ever been able to carry out observations like this, and it will allow us to gain even more accurate future insights into how cosmic explosions work,’ explains Dmitry Khangulyan, a theoretical astrophysicist at Rikkyo University in Tokyo, Japan. ‘We may, for example, discover that novae contribute to the ever-present sea of cosmic rays in our galaxy and therefore have a considerable effect on the dynamics of their immediate surroundings.’

Stefan Wagner, a professor at the regional observatory in Heidelberg and the director of the H.E.S.S. experiment, explains, ‘over the next few years, research using the Cherenkov Telescope Array (CTA) will show whether this type of nova is special.’ In addition, researchers now have a clearer idea of what to look for. This gives rise to a number of new possibilities for gaining a better understanding and being better able to explain events linked to novae. ‘This measurement is a further breakthrough in gamma-ray astronomy and encourages sign that we will be able to study many more cosmic explosions with H.E.S.S. and gamma-ray telescopes of the future.’