The Higgs boson has some self-love 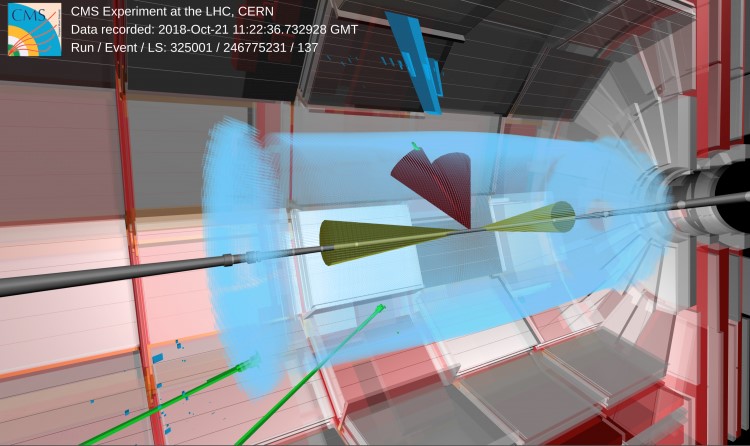 Collision recorded by the CMS experiment in 2018. It could be the production of two Higgs bosons, one of them decaying into 2 jets from b quarks (purple cones), the other decaying into 2 photons (thick green lines in the lower left). The 2 additional jets (dark yellow cones) are typical of the VBF production (see text).
© CMS collaboration

The discovery of the Higgs boson in 2012 by the ATLAS and CMS experiments at CERN opened a phase of precision measurements of the properties of the Higgs boson, the keystone of the Standard Model (SM) of particle physics. In particular, the study of the Higgs boson pair production (HH) allows a parameter called Higgs boson self-coupling, the last one of the SM not yet measured, to be determined. This measurement provides a unique test of the mechanism that explains how particles acquire mass in the SM. The searches for HH production using data recorded between 2016 and 2018 set strong constraints on the HH production. By the use of advanced analysis methods, among other things, the study of this very rare process pushes the SM to its limits. The results have been published in several articles, including one in the journal Nature in June 2022.

The Higgs boson, discovered at Cern in 2012 by the ATLAS and CMS experiments, is the cornerstone of the Standard Model (SM) of particle physics. In the SM, the masses of individual particles are related to their interaction with the Brout-Englert-Higgs (BEH) field via a theoretical mechanism known as "symmetry breaking" and proposed more than 50 years ago by the theorists Brout, Englert and Higgs. The Higgs boson (H) itself results from this mechanism and its discovery in 2012 was, therefore, a strong indication of the validity of this theoretical construct. Subsequently, various measurements of the Higgs boson's interactions with other SM particles such as the weak bosons Z, W and the heavy fermions (b, t quarks, tau leptons) confirmed the SM predictions proposed by Glashow, Salam and Weinberg in 1967.

However, the HH production at the Large Hadron Collider (LHC) predicted by the SM is very rare. Indeed, its production probability (called "cross section") is about 1000 times smaller than that of a single Higgs boson, which is in turn 10 billion times smaller than the collision probability of two protons. The main production mechanism is that of gluon fusion (see figure a), related to the λ parameter. The second production mechanism in terms of probability (see figure b), 20 times less likely, occurs through the fusion of Z or W vector bosons (VBF) and it involves λ as well as the λ2V coupling between two H and two vector bosons, otherwise inaccessible. 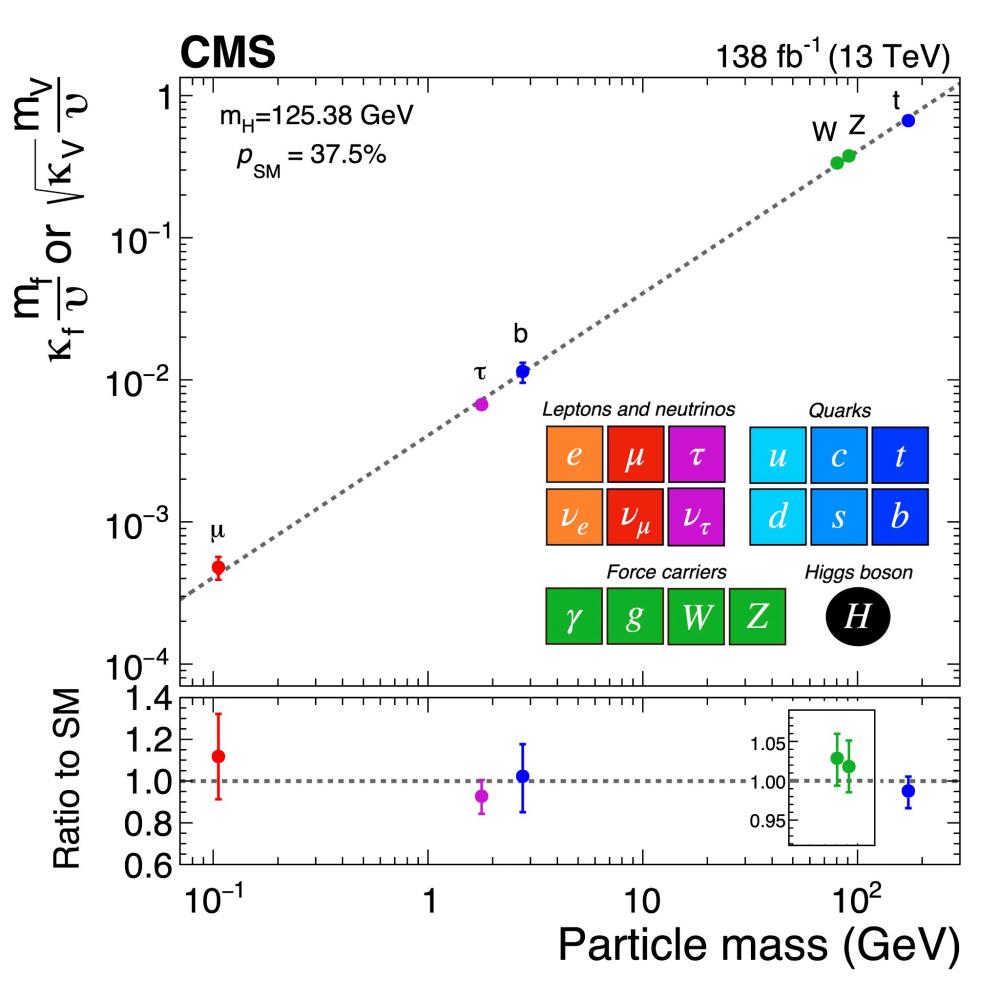 Measurement of the coupling between the Higgs boson and the different particles of the SM. The dotted line corresponds to the SM prediction, in which this coupling is directly related to the mass of the particles. © CMS collaboration

Therefore, the observation of the HH production as predicted by the SM is too rare to be accessible with the current data set collected at the LHC. However, many scenarios beyond the SM (BSM) could lead to variations in the λ and/or λ2V couplings from those predicted by the SM, thus drastically increasing the effective cross section, hence the interest in measuring λ and λ2V already now.

One Higgs is good, two are better

As the Higgs boson decays almost instantaneously after its production, physicists use the products of its decay to search for the presence of an HH pair. We speak of a decay channel.

Many HH decay channels are explored at the LHC to maximize the sensitivity to this signal. The choice of the final state is a trade-off between the highest possible decay rate and the lowest possible background contamination. Since about 58% of Higgs bosons decay into a pair of bb quarks, a convenient choice is to look for events where one of the two H bosons decays into bb. Thus, the HH→bbbb channel is the most abundant decay channel.

The two of the searches presented here are the most sensitive to HH production: the HH→bbγγ search and the HH→bbτ+τ- search, where the other H decays into a pair of photons (γγ) and a pair of tau leptons (τ+τ-) respectively.

Both searches use proton-proton collisions at a collision energy of 13 TeV, produced by the LHC and collected by the CMS experiment from 2016 to 2018. The Irfu teams played a central role in both searches. The CMS experiment has also combined all the HH results, and the outcome is also presented here. 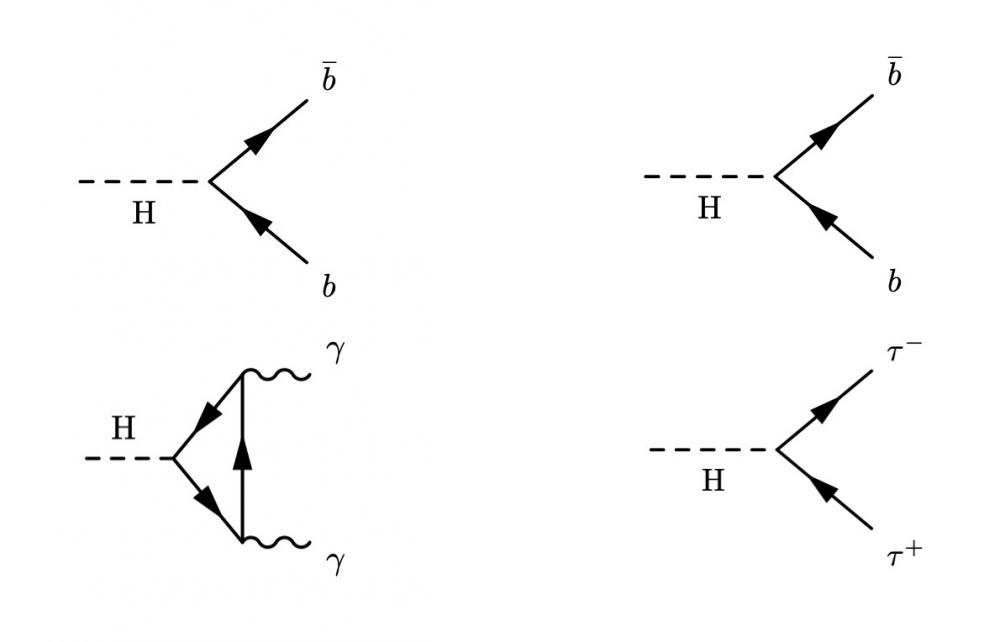 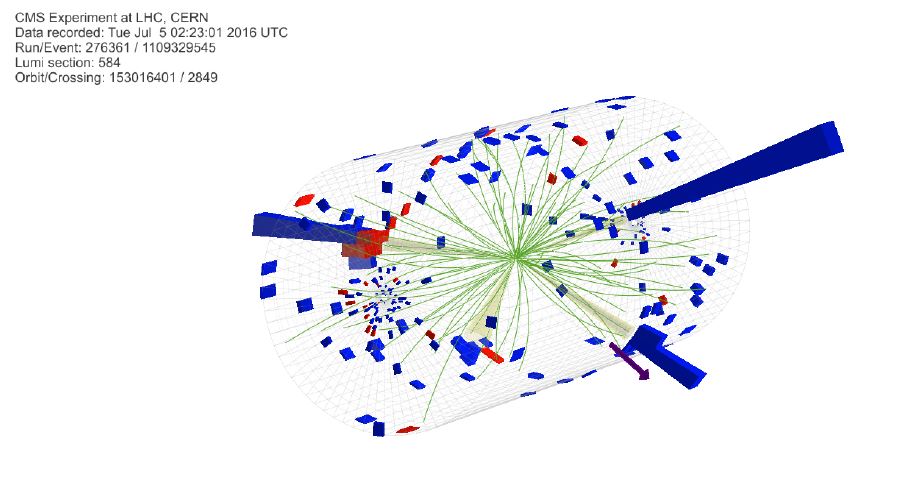 Collision recorded by the CMS experiment in 2016. It is an event candidate of double Higgs boson production in the final state with b quarks and tau leptons.
© CMS collaboration

Although the HH→bbγγ decay rate is very low (on the order of 0.3%), this channel has a high sensitivity, thanks to the quality of the photon measurement provided by the electromagnetic calorimeter (ECAL) of the CMS experiment. Thus, the excellent measurement of the photon energy (with an accuracy of the order of 1 to 2%) allows the background level to be drastically reduced. The CMS group at IRFU has played a key role in the construction and operation of the ECAL electromagnetic calorimeter, in particular in the calibration of this detector. The group also played a leading role in the discovery (in 2012) and subsequent measurement of the properties of the Higgs boson in the γγ decay channel.

The HH→bbτ+τ- final state, on the other hand, has a much higher decay rate (about 7.3%) but has to deal with a larger background (events with a topology in the detector very similar to bbτ+τ-), lwith the reconstruction and identification of tau leptons being a major experimental challenge. The study of this channel is only possible through the use of state-of-the-art techniques, especially in the identification of tau leptons: physicists have made use of sophisticated artificial intelligence methods. Thus, compared to previous studies, substantial improvements exploiting the machine learning algorithm have been made to the algorithms for the identification of photons, tau leptons, the measurement of the energy of b quark jets, as well as the extraction of signal events from the background dominating the data set. As for the interpretation of the results, the study of the VBF production mechanism has been included for the first time in addition to that of gluon fusion production. The VBF mechanism is characterized by the production of two jets (signaling the emission of quarks), in addition to the HH pair.

The figure at the beginning of this page shows a typical signature of a VBF (HH→bbγγ) candidate event recorded among the collisions collected in 2018.

The vice tightens around the Standard Model

The HH→bbγγ and HH→bbτ+τ- searches conclude that the HH production cross section is smaller than 7.7 and 3.3 times the SM prediction at the 95% confidence level, respectively. To optimize the sensitivity of the HH search, the analyses of the HH→bbγγ et HH→bbτ+τ- channels are statistically combined with those of other HH final states using the same data set and analyzed by other members of the CMS collaboration, such as the HH→bbbb search. This combination shows that the HH production cross section for all channels combined is less than 3.4 times that predicted by the SM.

These results are reinterpreted to constrain the range of values for the parameters λ and λ2V allowed by the comparison of the prediction to data.  The combination of HH searches performed by CMS constrains λ between -1.24 and 6.49 times its value in the SM and λ2V between 0.67 and 1.38 times its value in the SM. The latter result is a historical milestone in HH searches: as the value of λ2V = 0 is excluded, the existence of the process involving the interaction of two H with two vector bosons is established for the first time. The constraints on these two parameters are presented in the figure below.

In conclusion, the results obtained by CMS show an increased sensitivity compared to that expected from previous analyses. The improvement is due to the use of advanced analysis methods, the wider coverage of channels analyzed and the increased statistics. These results do not contradict the SM and they are very promising as collisions at the LHC resumed on July 5, 2022. The amount of data soon to be available should allow the SM to be probed ever further by constraining the parameters λ and λ2V, λ being the last parameter of the MS not yet measured experimentally. In the more distant future, the LHC will be replaced from 2029 onwards by a new collider, the HL-LHC, and will provide a data set 10 times larger than the one that will be available at the end of the current data taking. This will increase the sensitivity to very rare processes such as HH production, its observation being one of the main challenges of the HL-LHC physics program.