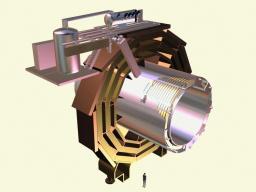 General view of the solenoid

CMS is one of the detectors of the 4 experiments (in addition to Alice, Atlas and LHCb) currently taking data at the LHC, the CERN protons collider near Geneva. CMS is located at point 5 of the LHC Collider.

To measure the energy of the particles one uses a magnetic field all the more powerful that the particles are energetic. The magnetic field of CMS is produced by an electromagnet which is in the form of a superconducting coil, 7 meters in diameter and 12 meters long, cooled at the temperature of liquid helium (-269 ° C). This coil is contained in a vacuum vessel intended to insulate it thermally. All this assembly is placed in the center of a steel structure of 12500 tons, for the flux return of the enormous magnetic field produced by this giant solenoid.

The Irfu, which is at the origin of the design of this superconducting solenoid, the biggest ever, was also in charge of the study and the responsibility of the follow-up of the processes of its assembly, going as far as creating dedicated tools for this purpose. The extremely complex assembly operations were carried out without major problems. This success also owes to the assembly teams at CERN and to the industrialists who provided various elements and who participated in their final assembly.

Main participants in the solenoid:

French collaboration for the CMS Magnet: 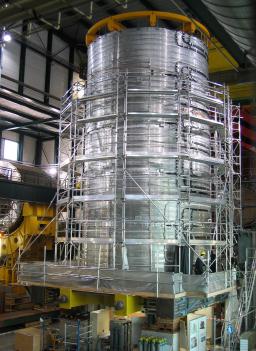 Assembly of the five coil modules in February 2005

- 1996 to 1997: General organization of the CMS collaboration (PDR and TDR)
- 05/1997: Technical Design Report
- 12/1998: Engineering Design Report of the coil
- Early 2000: construction of the first elements of the cold mass
- From May 2000: Arrival at CERN of the cylinder head (external armature). This marks the beginning of the assembly of the detector in the surface hall
- Early 2005: arrival of the 5th and last module at CERN
- Summer 2005: Introduction of the cold mass in the magnetic circuit
- February 2006: Magnet put in cold and brought to its nominal temperature
- Mid-July 2006: Start of electrical tests; First detections of cosmic rays
- End of August 2006: the solenoid reaches its nominal field of 4 Teslas
- End of October 2006: measurement of magnetic fields at different field levels
- November 2006: end of the surface tests. Beginning of descent of the elements of the magnet into a cave

All the tasks performed by Irfu were carried out technically and in accordance with the general planning of the magnet.

Highlights
- Switching of the CMS vacuum vessel (July 2002)
- End 2005: insertion of the cold mass of CMS in the cylinder head
- End of August 2006: the nominal magnetic field of 4 Teslas is reached 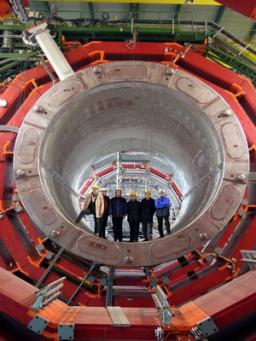 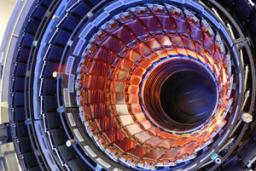 Artistic view of the solenoid