Logo of the experiment.

The main goal of the experiment was to perform a complete study of CP violation (CP is the symmetry linking particules and antiparticules) in the system of B mesons.

More generally the experiment studied the physics of heavy flavors: mesons and baryons with a b or a c quark and tau leptons.

The energy content of the Universe/Antimatter and CP violation.

The experiment was located at Stanford Linear Accelerator Center (SLAC) at Stanford University in the United States, using the PEP-II electron-positron collider. 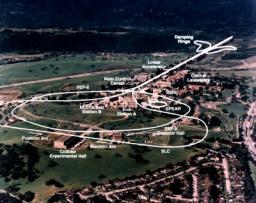 Site of the experiment.

Mesurement of the alpha angle of the unitarity triangle.

Dapnia played a major role in the construction and running of the DIRC detector (1995-1998). The DIRC was the main detector for particle identification in BABAR. This novel device prooved to be robust and performant.

In particular, Dapnia was responsible for:
- the mechanical structure of the Cerenkov light detector;
- the 11000 photomultiplicator tubes;
- the magnetic shielding;
- the calibration system;
- the reconstruction code;
- the alignement procedure.

Physicists from Dapnia have had important positions in the collaboration:
- physics analysis coordinator (2000-2001) ;
- chair of the speakers bureau (1997-1998) ;
- conveners of several physics analysis groups (dileptons, inclusive hadronic B meson decays, time dependent analyses of B meson decays to charm);
- co-system manager of the DIRC detector (1995-1998 and 2003-2007)

Scope of the experiment

The BABAR experiment has been one of the major experiment in High Energy Physics from 1999 to 2008. Dapnia and SPP have been heavily involved with a maximum of 14 physicists at the same time.

Georges Vasseur, head of the BABAR group at Saclay.