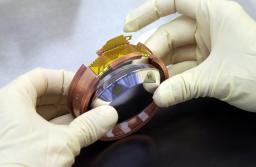 On the basis of experience acquired in the development of the cryogenic detectors for Edelweiss1, SEDI has produced a series of 23 "ionization-heat" bolometers operating at 20 mK, with the constraint of reducing the radioactivity of the detectors and their immediate environment as far as possible. With masses of between 320 and 350 g, these detectors, which simultaneously measure ionization and heat, are the largest currently in operation. These detectors allow for a rejection rate of the order of 1000 for particles produced by residual radioactivity.
The new EDELWEISS2 experiment of which this is part, could ultimately lead to the deployment of thirty times more detectors than EDELWEISS1. 2007 should enable the scientific potential associated with the production of around 100 detector of this type to be evaluated.

The HERSCHEL satellite will be launched by ARIANE-V during 2008. With its 3.5 m mirror cooled to 80 K, it will open up new windows for the observation of the Universe well beyond far infrared. These spectrum bands, hidden by the Earth's atmosphere in ground-based observations, are essential for understanding among other things the mechanisms of galaxy and star formation. The project to develop large matrices of bolometers completely covering the focal plane of a telescope emerged in 1997 following results produced at shorter wavelengths by the ISO satellite. DAPNIA, with LETI, then proposed a new focal plane concept, which has been widely taken up by other groups. This has led to the production for the PACS camera of a set of two focal planes that are highly sensitive (close to background noise), and cover the ranges 60-130 μm (over 2048 pixels) and 130-210 μm (over 512 pixels) respectively. This makes it the largest bolometer camera in operation in the world. For the first time on this type of detector, this camera is using a cold multiplexing system that considerably reduces the number of connections needed between the focal plane and the electronics produced by DAPNIA. To achieve the desired performance, this camera is cooled to 300 mK by a cryorefrigerator supplied by DSM/SBT in Grenoble. These technologies are now being used to produce a camera with a very large focal plane (4 kilopixels) to equip the largest terahertz ground telescopes (12 m) (ArTéMis project, launched in early 2006). 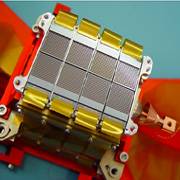