SACM's work on synchrotron light sources involves the two accelerating cryomodules for Soleil, which has 352-MHz cavities, and the two Super-3HC (third harmonic superconducting passive cavities) cryomodules, whose cavities function at 1.5 GHz. The Soleil cavities, equipped with power couplers, accelerate the beam circulating in the storage ring to compensate for the energy lost at each revolution in the form of synchrotron radiation. The Super-3HC cavities are passive, and it is the electron beam itself that provides them with the electromagnetic energy necessary to eliminate certain beam instabilities, and to lengthen the electron bunches in order to increase beam lifetime. The technology for the two types of cryomodules is based on a radiofrequency structure developed by Alban Mosnier in 1992 for very high current electron sources, B factories, and synchrotron radiation facilities.

A cryomodule prototype was built in 1999 during the Soleil detailed design phase (APD) in collaboration with Cern. In 2004, changes were implemented by SACM, in collaboration with Soleil and Cern, to make this prototype operational with the Soleil ring: complete disassembly of the cryomodule, cleaning and tests of the superconducting cavities in a vertical cryostat to check that their performance had not been degraded by all the operations carried out during the APD phase, complete reassembly of the cryomodule, and RF validation tests at full power in the Cern bunker.

The tests which took place in early 2005 validated the upgraded cryomodule prototype as being operational with the Soleil ring: reduced static cryogenic consumption (50 W) and enhanced thermal stability of the assembly, very good rejection of the fundamental mode by the dipolar high-order mode couplers, an accelerating field in the cavities (Emax > 11 MV/m) and maximum power that is supported by the RF couplers (180 kW in reflection mode). Following these validation tests, the cryomodule was installed at the Soleil ring facility in December 2005. Its cooling at 4 K took place a few months later, in May 2006. In June, the first beam acceleration in the storage ring was performed. During the commissioning phase which followed, the current was rapidly increased to its maximum value of 300 mA, which corresponds to the nominal operating level.

For the second cryomodule, to be identical to the first, Soleil is in charge of project management and the German industry group Accel has been awarded the construction contract, which was signed in October 2005, with a delivery planned for mid-2007. SACM's role is limited to a few specific services and expert studies. 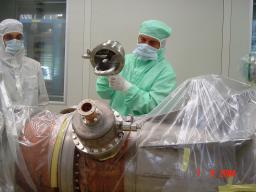 Since their 2002 installation on the SLS rings (Swiss Light Source at the Paul Sherrer Institute) and at the Elettra site (near in ), the two cryomodules for Super-3HC have been in regular operation. They have even become a key element in the operation of these facilities, particularly Elettra. Certain maintenance operations are carried out on a regular basis, around every 18 months, to replace the tuning system gearboxes, subject to intense wear at Elettra while they can remain immobile at SLS.

A request for the industrial transfer of this cryomodule has been made by Accel. Likewise, certain facilities have shown interest in this cryomodule and the possibility of installing it on their rings.