Superconducting quadrupole magnets for the LHC

SACM has been commissioned to design the cold masses of the main quadrupole electromagnets of the Large Hadron Collider (LHC) as part of ’s exceptional contribution to the construction of the machine. The main technological difficulties arise from the need for high mechanical precision to guarantee the homogeneity of the 10-4 field over the three metres of the magnet, with high electromagnetic burst forces of 4 times 110 tons per metre of the magnet. Moreover, the design must be suited to the industrial production of 400 units. After transferring its know-how to the manufacturer, SACM monitored the production of the magnets entrusted to the German company Accel, who delivered the last cold mass to Cern in the autumn of 2006.

For each of these openings, four superconductor coils are braced in a stainless steel collar assembly which renders them integral. The major factor affecting the performance of the magnet is the care exercised when winding the superconductor cable and bracing the coils. Although the coils are 3m in length and have an average radius of 4cm, the order of magnitude to assess their quality is around twenty microns. This dimension guarantees the quality of the magnetic field which will be used to focus the particle beam and ensures their mechanical stability. 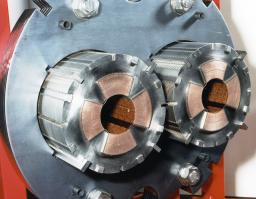 The quadrupoles have a dual opening configuration and are combined in the same magnetic and cryogenic structure. The main characteristics of the magnets are: a length of 3.2 m; an opening of 56 mm; and a field strength gradient of 223 T/m. 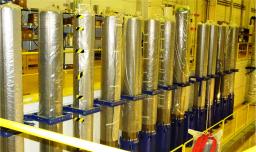 The production monitoring phase was carried out by an SACM technician present on Accel's premises every other week and by two engineers. The team was organised so as to ensure an uninterrupted presence to enable its members to react quickly to the company's requests. 4 cold masses were produced per week in the nominal production phase. Consequently, any breaks in the production process were very costly. The cold masses were monitored in the factory at the main production stages: during and after winding and during the bracing of the magnets. The fineness of the hot magnetic measurements made it an essential fault detection tool. The test bench installed in the factory showed its efficiency half way through production when it detected the fact that the permeability of the austenitic steel in the bracing collars was 10% higher that the nominal value. Parasite effects were cancelled out by carefully selecting the position of the magnets in question in the machine, which reduced the lateness and made it possible to use most of these collars, while the supplier restored nominal quality of the steel.

The originality of the quality system put in place

The main tool we used for monitoring production was the non-compliance management system. Its objectives were to be able to react quickly if a fault was detected at each production stage up to the cold acceptance test at Cern, and to have records of the cold masses during the twenty years of operation of the LHC.

The three month period between the manufacture and the testing of a magnet corresponded to the production of forty cold masses. All deviations had to be known and analysed in order to allow the appropriate corrective action to be taken as quickly as possible. To reduce uncertainties, one main quadrupole magnet out of ten was tested separately. This procedure has made it possible to check from July 2002 that the industrial transfer was carried out properly. Out of 400 cold masses, only one magnet was rejected. 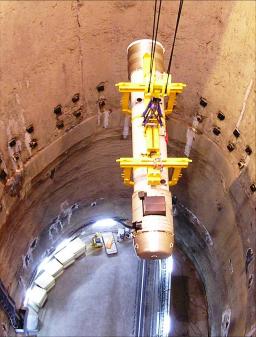 Lowering of the first cold mass into the LHC tunnel on 19 April 2005 (courtesy of Cern). 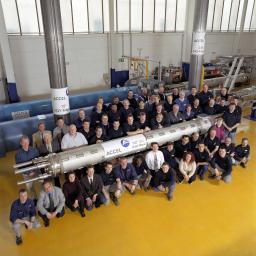 Experience feedback from the collaboration

In December 2004, the 100th cold mass off the production line was celebrated. In November 2006, 6 years after the signing of the contract with Accel, production was finished. This was the end of the 10 year period of the collaboration agreement between Cern and CEA. In fact, this agreement formalised a 17-year collaboration which began at the end of the 1980's based on the CEA's expertise, proven during the manufacture of the quadrupoles for the Hera machine. Two prototypes had therefore already been designed, manufactured by SACM then tested in 1994 at Cern.

The close collaboration between SACM and Cern was the driving force behind the success of this project. The two laboratories combined their expertise in a spirit of mutual trust, following carefully developed quality control procedures.