The Clas solenoid for the DVCS experiment 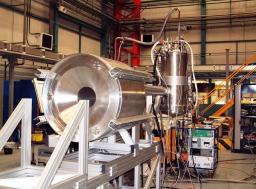 Tests of the magnet at Saclay in December 2004. The main characteristics of the magnet are:
A field at the centre of 4.65 T in an opening 230 mm in diameter.
A field external to the vacuum chamber lower than 3 10 -3 T from an external diameter of 912 mm.
The nominal current is 650 A and the magnet operates in liquid helium at 4.2 K.

Within the framework of the collaboration between Dapnia and the Jefferson Laboratory in the United States, SACM designed and made a superconducting solenoid for the Clas detector (Cebaf[1] large acceptance spectrometer) for the Deep Virtual Compton Scattering distribution studies (DVCS) in collaboration with the Nuclear Physics department and the Systems engineering department. The first series of experiments in DVCS physics started in March 2005 in in .

The superconducting magnet operates in the centre of the magnetic field created by the six magnets in the Clas toroid. To limit the interacting forces between the toroid and the solenoid, we used the active shielding technique. A second solenoidal coil placed around the main coil cancels the field at the periphery of the assembly. The two solenoids had been wound in 2003. They were assembled then integrated into the cryostat during 2004.

The cryostat required complex mechanical assembly operations to satisfy the constraints for use at the Clas centre and to enable the magnet to be transported by air and by land. The magnet was custom designed with an external clearance of 10 mm in respect of the detector's diameter. The cryogenic interface is offset 2 m behind the magnet. Finally, the configuration of the site also made it necessary to implement horizontal cryogenics which operate by natural convection with no cooling control mechanism or logic controller. 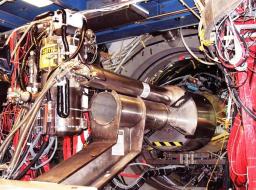 The magnet at the entrance to the Clas detector in September 2005. On the left, the cryogenic satellite which accommodates the helium distribution and the current leads.

The completed assembly was tested in Saclay in December 2004. It was sent to the in January 2005. We installed the magnet in the Jefferson Laboratory (Jlab) in February 2005, where it passed all the safety and commissioning tests successfully up to the start of the physics experiments on 1st March. The Clas-DVCS magnet has opened up new opportunities for the Clas detector centre. It was quickly adopted by Jlab's scientific community who use it for other experiments in addition to DVCS studies. A second series of DVCS measurements are being programmed for the start of 2008.