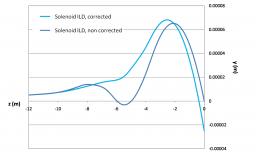 Vertical trajectory of the beam in the ILC interaction region, with a 14 mrad crossing angle.

In order to reach the desired luminosity, the beams of the ILC (International Linear Collider) and the CLIC (Compact Linear Collider) are focused down to nanometer vertical spot sizes. SACM is involved in studying the final focus and the interaction region for these projects. It has taken over and improved the design of the International Large Detector's magnet to meet physicists' requirements.

Further to the study presented in 2007 on a final focus system with a head-on collision scheme and based on four wide-aperture superconducting quadrupoles, thesis work has begun to study the tuning of beam parameters for collisions with a non-zero (14 mrad) crossing angle. In such cases, the beam enters the detector solenoid off axis. A deviation induced by the radial component of the magnetic field is therefore added to the effect of the axial field. These phenomena increase the size of the beam and offset its trajectory at the interaction point. Solenoid effects on the nanometric beam had to be modeled with sufficient precision, and work was carried out to optimize their correction using an anti-solenoid. In this way, the luminosity was restored by optical corrections for both the detectors, the ILD and SiD (Silicon Detector), planned in the interaction region. 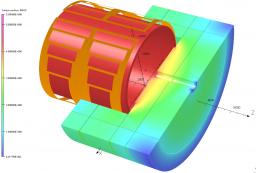 Simplified geometry of the magnet and anti-DiD for magnetic calculations.

The standard version still uses a CMS solenoid magnet, with a 3.5 to 4 T field in a warm aperture around 7 m in diameter. Studies also considered ways of improving the homogeneity of the magnetic field and including a device to minimize effects due to beams crossing at a non-zero angle.

These studies can be broken down into the following main stages:

-        3D comparison of various solutions carried out, with and without built-in devices for improving the magnetic field, and with and without an anti-DiD (dipole-in-detector) component, to minimize the effects of beam crossing at a non-zero angle (4th ILD meeting, January 2010, Paris).

Physicists now have all the data they need to reach a decision concerning the final magnetic configuration for the detector.