Toroidal magnet for the ATLAS detector

The magnetic system of the ATLAS detector in the Large Hadron Collider at CERN is made up of several superconducting magnets, operating at the temperature of liquid helium, i.e. –269°C. It comprises a central toroid, two end toroids and a central solenoid. IRFU was responsible for the design and industrial follow-up of the construction of the central toroid, under an agreement signed with CERN in 1997.

The set-up for the ATLAS experiment includes a large-scale muon detector, which uses three concentric layers of wire chamber detectors to obtain precise measurements of a muon path, bent by an intense magnetic field. To create this magnetic field, a team of IRFU research engineers designed a magnet made up of eight 25 m x 5 m rectangular superconducting coils, which were energized by a 20,500 A current. The resulting field surrounds the experimental area like a toroid, which is why the ATLAS giant magnet is described as “toroidal”.

It took thirty kilometers of superconducting cables to make these coils, which are cooled by liquid helium. The eight coils were tested one at a time, above ground, applying a 22,000 A current. In 2005, they were assembled in the ATLAS cavern, 100 m below ground level, using an aluminum structure. Arranged in a star configuration and positioned with a precision of a few millimeters, the coils occupy a volume equal to that of a six-storey building. The structure supporting the 1400 t muon detector can withstand considerable magnetic forces. 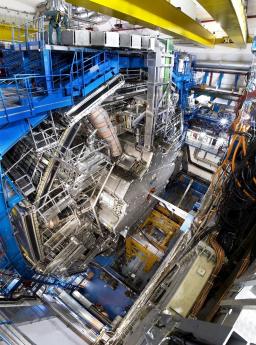 View of the central toroid and one of the two end toroids being installed.

The three magnets were brought up to their rated current on August 4, 2008. The operation took three hours to complete. Prolonged tests were performed throughout August, together with three-minute fast discharge tests. The toroids were then tested at the same time as the 2 T central solenoid, a magnet developed by the High Energy Accelerator Research Organization (KEK) in Japan.

All these performance tests were successful, and ATLAS is now the largest superconducting magnet system in the world. When energized, it can store more than 1.6 GJ of magnetic energy, enough to lift the Eiffel Tower 15 m off the ground.

These results are the fruit of more than 15 years of international collaborative research. The ATLAS detector is now operational and, since the LHC came into effective service at the end of 2009, can be used to measure particles emitted during proton collisions in an attempt to discover the Higgs boson. All through this period, SACM has played a leading role in coil design, development, industrial construction, assembly, and testing, as well as in assembling and testing the toroid underground.