The superconducting solenoid for the CMS detector 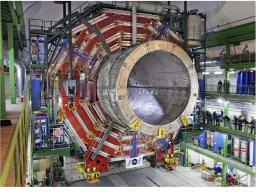 The superconducting Compact Muon Solenoid (CMS) installed on the Large Hadron Collider (LHC) at CERN is remarkable not only for its size and its stored magnetic energy. It is also notable for its reinforced aluminum alloy conductor and the design of the solenoid coil in five separate modules, each consisting of four layers wound within a supporting cylinder. IRFU contributed to the general design and construction of the solenoid as part of a long standing collaboration agreement with CERN dating back to 1996.

Following successful testing of the detector magnet at its nominal field rating of 4 T in the CERN surface facility in November 2006, the detector was disassembled into fifteen sections so that it could be lowered into the underground cavern. The magnet, together with its central soft iron shielding ring, was lowered into the tunnel on February 29, 2007. It took eleven hours for the 2000 t system to be lowered 90 meters to the tunnel level. The parts of the detector were reassembled until January 2008, and the magnet was cooled down during February 2008.

The magnet was ramped up to its nominal field level in November 2008 with no serious problems occurring. This date marked the end of underground acceptance testing and, with it, the end of CEA involvement with the system. The results obtained during underground testing were essentially identical to those obtained on the surface. 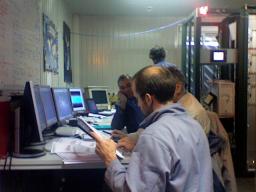 Participating in the cryomagnetic tests.

The magnet was then released for physics:

-        Cosmic Ray at Four Tesla (CRAFT) over a four week period from mid-October 2008, with an actual operational field of 3.8 T during these tests.

Following commissioning on the surface, the magnet and its associated sub-assemblies (electrical circuit, cryogenics, and instrumentation) have proved to be very safe and reliable in use, both during underground testing and during operation of the detector as part of the physics program. This success is the result of more than 15 years effort within the framework of a worldwide collaboration. Throughout this period, SACM has played a major role in the general design of the magnet, the management of its construction, and the testing of some of the sub-assemblies, including the heat shields, local cryogenics, electrical supply systems, and tie rods. SACM also contributed to the supervision of the assembly process, and in the acceptance tests on the surface and underground.