The Plasma Physics Institute in Garching, Germany, is responsible for the manufacture of one of the research machines for the European thermonuclear magnetic confinement fusion program, the Wendelstein 7-X stellarator. This machine, also known as the W7-X, has a diameter of around 15 meters and a mass of 550 metric tons. It consists of 70 superconducting magnets designed to confine plasma. The SACM is responsible for the acceptance tests on the 70 magnets manufactured in Germany, Italy and England before they are finally installed on the stellarator in Greifswald in Germany.

The tests will be used to study the electrical, thermal and hydraulic behavior of the magnets at both ambient and cryogenic temperatures. They are also designed to confirm the correct operation of the coils prior to assembly. A test station with two cryostats was designed, built and qualified at Saclay in the first years of this century. The first tests were carried out in 2003 and completed with the successful testing of the 70th magnet in 2009. 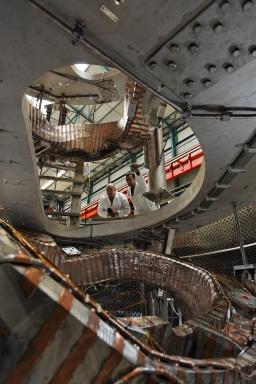 Two coils being installed in their cryostat 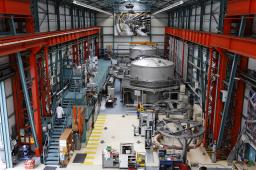 Results of the magnet tests

A total of 96 cryogenic tests were needed in order to check the 70 magnets. These tests revealed a number of technical problems relating to the magnets. These included:

-        Insulation problems in the protection cables, and between the magnets themselves and ground (tested at 10 kV and 4.5 K).

Six magnets were returned to the manufacturers three times for repair, and six others were returned twice for repair before passing the tests successfully. The number of magnets tested successfully increased each year to reach a total of 26 during 2008. The results of these tests illustrate the necessity of testing each magnet before it is assembled into the machine. However, it cannot be assumed that passing these tests successfully will guarantee the absence of problems during final configuration

Initial design work for the JT-60SA project was begun during 2009. This project forms part of a joint agreement between Europe and Japan on the broader approach to magnetically confined thermonuclear fusion.