The Iseult project for the Neurospin platform 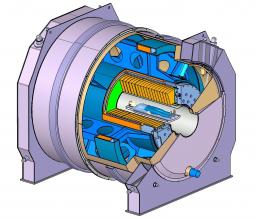 Cross-section of the Iseult magnet. In orange: the superconducting coils. In blue: the helium enclosure and mechanical structure.

The whole body 11.7 T Iseult magnet due to be installed at Neurospin in 2013 is the core component of a magnetic resonance imaging (MRI) scanner that is expected to set new standards for cerebral imaging. The success of this joint French-German project depends on the development of prototypes to confirm the key design points of this ambitious project that extends current technological boundaries.

Magnetic resonance imaging (MRI) is a diagnostic and research tool used in the neurosciences. In 2013, the Neurospin centre will take delivery of an 11.7 tesla MRI scanner with a 90 cm diameter opening capable of scanning the patient’s entire body while providing a homogeneous magnetic field across the entire area of interest.

The design of the magnet, together with the transmitting and receiving RF antenna, forms part of the Iseult research program being carried out in collaboration with the main industrial companies active in the sector, Guerbet, Siemens and Alstom. Large design teams in SACM, SIS and IRFU/SEDI are contributing to the project. 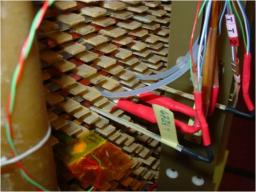 The 8 T winding channels have been fitted with temperature and pressure sensors in order to study the quench thermalhydraulics under conditions similar to those in Iseult. 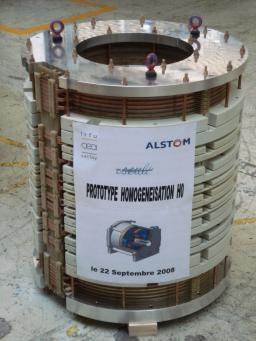 The challenges of the Iseult project

The design of the Iseult magnet includes a number of characteristics that set it apart from conventional MRI magnets. The main magnet coil, weighing 45 tons, must be positioned as accurately as possible to within a few tenths of a millimeter around the brain. The coil consists of several thousand kilometers of niobium-titanium superconducting wire wound in double pancake coils carrying a current of 1400 A with a stability of 0.05 ppm/h. This superconducting coil is maintained at a very low temperature of 1.8 K above absolute zero using several thousand liters of superfluid helium insulated from the external temperature by a series of enclosures similar to a giant thermos flask. The magnetic field is confined to the examination room by another coil that generates an opposing field to cancel out the field from the main coil beyond the confines of the magnet. A development program including a number of prototypes and special test stations will be required in order to understand and overcome these problems.

The RF antenna needs to be capable of generating a uniform excitation over the widest possible area while minimizing the power dissipated in the tissues of the body.

An old 8 T magnet used in the High Magnetic Fields Laboratory (LCMI) in Grenoble has been built into a new cryostat in order to be used for testing purposes. This prototype is known as the Eight Tesla Test Station (SEHT) has been designed using the same winding technique and cooling system as Iseult. The use of this test station has provided an opportunity to evaluate and confirm developments in 1.8 K cryogenics, electrical supply systems, control and instrumentation, and the transition protection of the magnet. 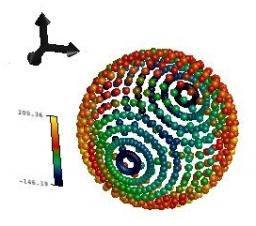 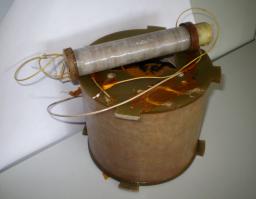 An assembly of 24 double pancake coils has been used to demonstrate experimentally the possibility of creating a homogeneous field of MRI quality using double pancakes and to test the assembly procedures planned for Iseult. The field of this 1.5 T magnet has been measured at 648 separate points using an NMR probe. The measured homogeneity of 300 ppm peak-to-peak is in line with theoretical predictions.

Stabilizing the current in the magnet

The field stability specification of 0.05 ppm/h cannot be achieved simply by providing a stabilized current supply. A new concept has been developed by IRFU in order to stabilize the Iseult magnetic field. This based on the use of a current limiter and filter resistor connected in parallel with the magnet and the electrical supply.

This concept has been successfully tested on the SEHT station, and subsequently on the H0 magnet, providing qualitative and quantitative proof of principle on magnets with different fields and inductances.

The Iseult magnet is currently under construction, with the conductor being manufactured by Luvata (Waterbury, USA) and the double pancake coils being wound by Alstom in Belfort. The magnet is due for delivery to Saclay at the end of 2012 with the aim of entering service at Neurospin in early 2013. 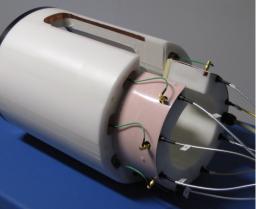 Prototype of an 8-channel antenna array for MRI use at 7 T ready for in vivo testing.

A magnetic resonance image is obtained by processing the relaxation signal from a previously excited atomic nucleus, usually proton in water. An antenna, also referred to as a probe or coil, is used to excite the nuclei with electromagnetic wave and to receive the relaxation signal. The operating frequency increases in proportion to the static magnetic field, from 128 MHz at 3 T to 500 MHz at 11.7 T.

At frequencies up to 128 MHz, a single antenna can be used to provide a sufficiently uniform excitation. At higher frequencies, the interaction between the transmitted wave and the material of the head results in a strongly non-uniform excitation. An antenna array is needed with multiple transmitting and receiving elements. It has to be designed to fulfill specific constraints relating to the mutual coupling between the elements, the efficiency, the excitation mapping, the control strategy, the power absorbed by the patient, etc. An antenna array provides the extra degrees of freedom necessary to obtain a uniform excitation by means of shimming algorithms based on the knowledge of each transmitting element excitation map.

These algorithms are developed using finite element simulations. The design concepts have been confirmed in close collaboration with the Neurospin Center using a Siemens MRI scanner operating at 7 T and 298 MHz. The tests were initially carried out using simple phantoms to simulate the patient before moving on to in vivo tests.

Some engineering aspects, including the absorbed power and the potential athermal effects of the electromagnetic waves on human tissue, and the characterization of the dielectric materials used in the construction of the antennas and phantoms, have been studied in collaboration with Supélec, the Fresnel Institute, and the Electronics and Telecommunications Institute (IETR) in Rennes.

A prototype antenna array with eight channels for a 7 T scanner has been built and successfully tested, and a 15-channel coil is currently being designed. An innovative method of driving a 15-channel transmitting antenna with just eight electronic drivers has been developed with the aim of improving both the system cost and the efficiency of the excitation mapping. This development work has resulted in two patent applications being filed. These design concepts are currently being extended from 7 T to 11.7 T for the Iseult project. 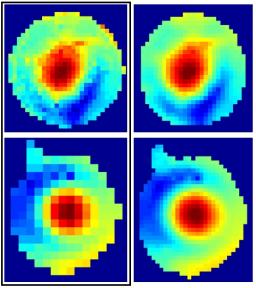