Heat transfer through superfluid helium in a porous medium 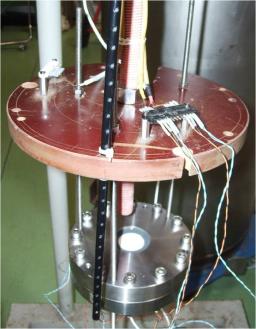 Sample of Al2O3 ceramic glued to a metal flange prior to insertion in the cryostat.

A range of new ceramic electrical insulator materials is being studied as part of the development of He II cooled Nb3Sn magnets for the LHC upgrade program. Current materials are impermeable to helium and their thermal resistance is too high to achieve sufficient cooling and to provide the thermal stability of future magnets.

A number of fundamental studies are being carried out by SACM with the aim of determining the laws governing the transport of He II. Heat transfers in a porous medium saturated with He II are being investigated using the two fluids model describing the thermo-mechanical behavior of He II. The volume averaging method applied to the system of equations at the pore scale has been used to characterize the medium by means of a macroscopic value similar to a permeability. The permeability obtained from this model has been calculated for a network of unitary cells at temperatures between 1.4 K and 2.1 K, and has been found to be equal to the intrinsic permeability of the porous medium independent of the heat flux and temperature. The proposed model, especially the structure of the macro-scale equations with their permeability and tortuosity terms, may be used as a base for the development of an extended model that includes superfluid turbulence. 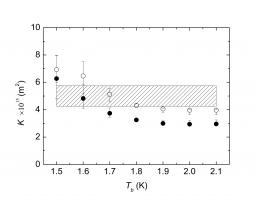 Comparison of the changes in permeability K as a function of the bath temperature Tb, for samples of Al2O3 with a 1 µm pore size and 32% porosity, as determined in He II (3 mm ● and 4 mm ○ thickness), and in gaseous helium at 5 K (hatched area).

Independent measurements of permeability in gaseous helium at 5 K and in helium II show a reasonable agreement with the theoretical predictions. However, the experiments also show that the permeability in He II increases as the temperature falls. It is difficult to know whether this increase is due to an artifact in the measurement technique used, or whether it is associated with a more fundamental problem as the superfluid component dominates the flux at temperatures close to 1.4 K. More precise experiments and theoretical analyses are now required in the temperature range of 1.4 K to 1.8 K.