Development of high field magnets for the SLHC 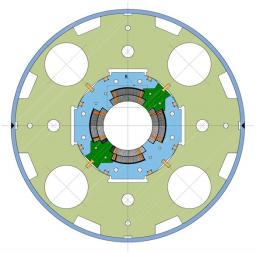 The four-block configuration chosen for the NbTi quadrupoles (bycourtesy of Glyn Kirby, CERN).

The luminosity of the LHC could be increased by a factor of 2 to 3 by replacing the final focusing quadrupole triplets with longer quadrupole triplets with a wider aperture of 120 mm compared with the 70 mm aperture of the current triplets. The peak field foreseen on the conductors is of the same order of magnitude as that in the LHC main quadrupoles, enabling the use of NbTi. However, the stored energy and the electromagnetic forces involved are very much higher. Design studies for the quadrupoles have been carried out in collaboration between the CEA and CERN, under FP7 and the French Special Contribution to CERN. The magnetic design work was carried out by CERN, while the CEA was responsible for the mechanical design. CEA is also in charge of the manufacturing of four 1.8 m coils (+ 1 test coil) which will be assembled and tested at CERN to validate the design. 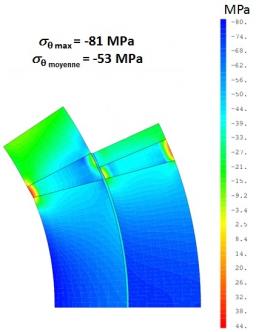 Distribution of the azimuthal stress on a quadrupole octant at 1.9 K and nominal current. 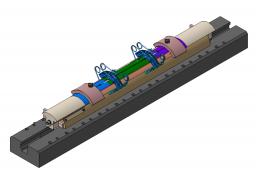 Mock-up of the winding tooling for testing on the first block of the internal layer of the quadrupole (by courtesy of SIS).

The project began in September 2008 with studies on two different coil configurations, and the final choice of a four-block configuration was made in October 2009. Since then, the mechanical design has been completed and detailed studies on the winding and polymerization tooling have begun. First 1.8-m coil manufacturing is planned for October 2010.

The magnetic fields required for Phase II of the SLHC, and the radiation doses received by the magnets in the interaction regions, make it impossible to use NbTi for these magnets and require the use of Nb3Sn. 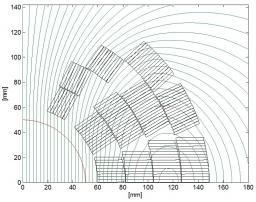 A number of R&D activities have been launched in order to study the ability of the components foreseen for the coils to withstand radiation, model and optimize the extraction of heat from the coils, and master the use of Nb3Sn in accelerator magnets. The final objective of these activities is the manufacturing of a Nb3Sn dipole with a 100 mm aperture and a central field of 13 T at 4.2 K. This work is being carried out in collaboration with CERN and the Technical University of Wroclaw, with funding from FP7 EuCARD and the French Special Contribution to CERN.In addition to the participation in the design and manufacturing of Nb3Sn dipole coils, work is also being carried out on heat exchange measurements on the different materials foreseen for the dipole, the manufacturing of three Nb3Sn coils in a racetrack configuration with ceramic insulation, and the supply of the high performance Nb3Sn strand needed for the dipole. The design studies for the dipole began in September 2009, and the final choice of coil configuration is intended to be made during 2010. 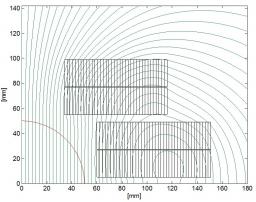