Positron source for the GBAR experiment

The High Intensity Positron Source (SOPHI) is the experimental platform for the Gravitational Behavior of Antimatter at Rest (GBAR) experiment led by physicists from the Particle Physics Department’s. This experiment intends to measure the gravitational constant for antimatter. It is accompanied by a trap for accumulating positrons and an analysis line for use in developing materials.

The positrons are produced when electrons interact with a tungsten target. They are then collected and guided by a magnetic system. The innovative aspect of the system lies in the low energy of the incident electrons, resulting in a positron beam with high energy and pulse dispersion. The challenge is to capture these positrons and separate them from the electrons, which outnumber them by a thousand to one.

Installed in 2007 in Building 126 at CEA Saclay which used to house the older SATURNE accelerator, the source is fed from a linear accelerator generating electrons at 6 MeV. Based on a concept patented by the physicists Patrice Perez and André Rosowsky, this demonstrator was funded by the French National Research Agency (ANR) in 2005, and by the local authority of the Essonne department in 2006. Following a commissioning process lasting several years, the source entered operation in 2010. 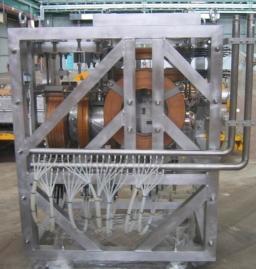 Transport of positrons and magnetic trap

A magnetic guidance system is used to extract the positrons from the radiological protection bunker and to attenuate the pulsed nature of the positron flow resulting from the temporal structure of the electron accelerator.

With funding from the ANR POSITRAP project, a magnetic positron storage trap on loan from the Japanese Riken Institute was installed and recommissioned on the main positron production line in 2011.

Use of positrons in material science

At the same time, a number of studies were carried out in collaboration with the CERN teams led by Professor André Rubbia with the aim of identifying materials capable of generating large quantities of positronium. Positrons are also used in materials science as probes to characterize the size of point defects in crystal structures. The new source may eventually be used to replace the sodium-22 sources that currently supply positrons for materials science applications.

The ultimate aim of the GBAR experiment is to identify the sign and measure the intensity of terrestrial gravitational acceleration for antimatter. In the extreme cases of models that allow for the possibility of negative acceleration, an atom of antimatter subjected to the Earth's gravity alone would rise rather than fall. The experiment proposal submitted to CERN in 2011 was accepted by the Research Board in May 2012, and a collaborative framework involving twelve European research institutes is currently being established in order to seek funding. 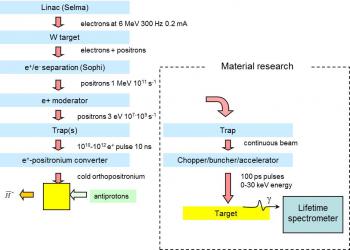