In order to optimize the performance of cryomagnetic systems, CEA actively supports R&D efforts involving the cooling of these systems. Research is being led on different topics corresponding to the different types of superconducting magnets. Studies on two-phase helium flows in transient conditions are being led to predict the thermo-hydraulic phenomena occurring during a quench of the superconducting magnets cooled by external flows and operating, for example, by convection. For smaller systems, we are studying the coupling of a circulation loop with cryogenerators so as to create autonomous cooling systems. Finally, studies are also being led to understand the heat transfer in superfluid helium through microchannels representing typical thermal paths in the electrical insulations of accelerator magnets.

Certain cooling systems of detector magnets in high-energy physics applications are based on two-phase helium circulation loops. Experimental studies are being led to study the particular case of transient conditions during the cooling of these large magnets. These are crucial, since they cover the scenario in which the magnets transition from the superconducting state to the normal state, dissipating a large amount of heat. The results of the experiments show that heat transfers are improved in the first moments (for about 100 ms) after the power is dissipated. The increase in the heat transfer coefficient along the wall is attributed to a dramatic increase in nucleated boiling, increasing the heat transfer. After this transient state, the transfer coefficient drops significantly for high heat flux densities, leading to the appearance of film boiling, which is catastrophic for cooling. Knowledge concerning these phenomena and their time constants will allow optimizing the cooling of these large magnets. 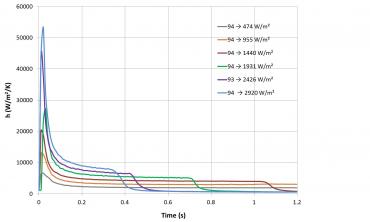 Changes in the wall heat transfer coefficient in the event of a dramatic increase of the heat flux density, from an initial value of 94 W/m2 to 2920 W/m2. 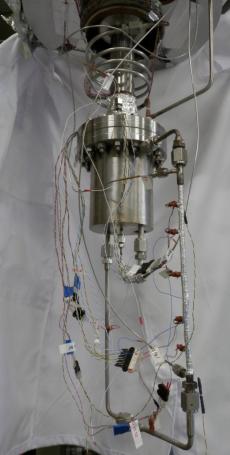 Autonomous convection loop comprising a cryogenerator (top), a condenser (stainless steel pot) and the heat exchanger (a vertical copper tube with a 4 mm diameter and equipped with a heating wire).

The idea of coupling a natural circulation loop (thermosiphon) with a cryogenerator presents several advantages for the cooling of cryomagnetic systems of medium size and power, operating at low temperatures (10 W to 4.2 K) or at the temperatures of liquid nitrogen (100 W to 77 K). This coupling combines the advantages of a circulation loop and the recondensation of vapors representing a large energy gain (no transport and no loss of cryogenic fluid) and makes this mode of cooling autonomous. It is easy to see interest of such a system placed in the bottom of a tunnel, for example, or for applications using superconductors with high critical temperatures such as power cables or the latest generation electromagnets.

An experimental autonomous loop at helium temperature was developed and instrumented in order to study its cooling capacities. When the power dissipated in the heat exchanger increases, different thermal conditions are encountered in two-phase flows: a natural convection state, a nucleated boiling state, a film boiling state (after a jump in temperature of approximately 1 K), then a supercritical single-phase flow for high heat fluxes. The appearance of this last state is not surprising, since the system operates in a closed loop and not at constant pressure. The cooling capacity of such a system is rather great since the heat transfer coefficient varies from 1 to 10 kW.m-2.K-1. 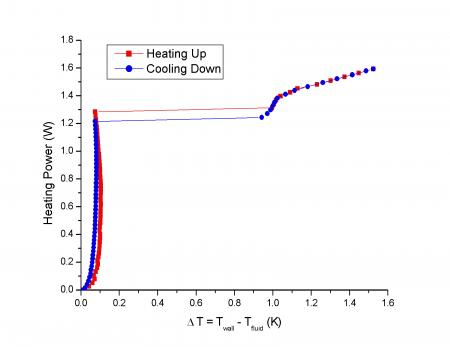 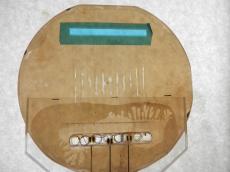 Microchannels (2 mm x 10 µm) dug into a Pyrex wafer. At bottom: helium volume equipped with a heater (wire in pigtail form) and miniature temperature sensors. At top (in green): outlet of channels in the superfluid helium bath.

For superconducting accelerator magnets cooled by superfluid helium (T < 2.2 K), the electrical insulation of the conductors constitutes the greatest thermal barrier to cooling. The insulation of NbTi magnets is made up of insulation tapes wrapping made of polymer, creating microchannels with typical dimensions of 10 to 100 μm. The thermal phenomena in the superfluid helium at this level of containment must be included in order to optimize the cooling of these magnets. For the analysis of these thermal transfers, microchannels are chemically etched in the Pyrex wafers. A temperature difference, measured with miniature sensors, is created between a superfluid helium volume and the outlet of the channels using a heater. These measurements are compared to the known heat transfer models of the superfluid helium. The Gorter Mellink regime is encountered for channels with large dimensions (100 µm equivalent diameter) and the Landau regime is encountered for smaller dimensions (17 µm x 75 µm and 16 µm x 24 µm). Upcoming studies will focus on dimensions of approximately a micron. 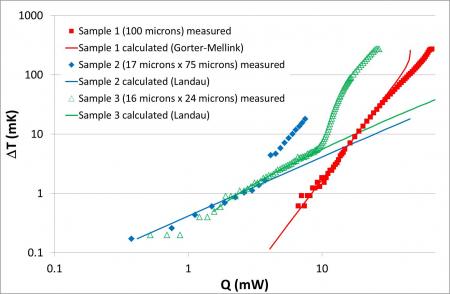 Temperature deviations in channels of different dimensions. The temperature of the helium bath is 1.9 K.