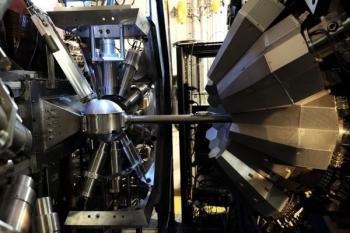 It counts about fifty people. It is composed of researchers, post-doctoral fellows, thesis students, as well as engineers and technicians.

Research is experimental as well as theoretical. They focus on 4 major themes:

The close articulation between the different research themes leads the members of the physical group to carry out different theoretical works at the same time and to carry out experiments whose complementarity makes it possible to advance our understanding of the organization of matter on the scale of the infinitely small as well as the infinitely large.

As host physicists, GANIL researchers play a key role in the scientific animation and use of the facility by a large international scientific community. As such, they are strongly committed to improving its performance and developing new measurement tools that are increasingly efficient and accurate, with the support of the laboratory's technical teams.