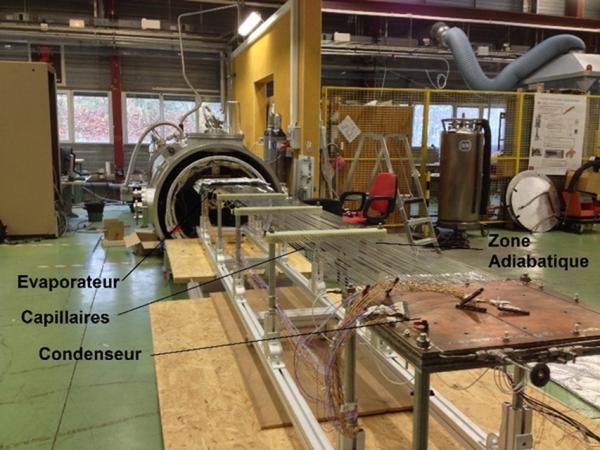 Pulsating heat pipes (PHPs) show great promise for providing light, passive and thermally very efficient connections between a system to be cooled and a cryogenerator. As they can be built to operate independently of gravity, pulsating heat pipes were factored into the cryogenic design of the magnet for the SR2S space radiation superconducting shield project. Nitrogen cryogenic pulsating heat pipes 3.6 m in length were studied under experimental conditions to meet the specific requirements of this project. A pulsating heat pipe consists of a smooth capillary tube that runs back and forth several times between an evaporator and condenser before looping back on itself. This tube is partially filled with liquid and its diameter is sized so that the capillary force predominates and creates an alternating series of vapor bubbles and liquid slugs. These pulsate and create significant heat exchange by convection and phase change. A special test stand was built for PHPs in 2015 (see photo). The first encouraging results were obtained on large heat pipes operating with liquid nitrogen. As can be seen in the curve, quasi-stable operating conditions are still a little too short (33 min) for this type of thermal connection to be validated in cryogenic magnet design, although a very high level of thermal performance is obtained. Test analysis showed that the equivalent conductance of a heat pipe composed of 36 tubes 1.5 mm in diameter was very high - in the region of 105 W/m.K - close to that observed in small heat pipes already studied in other laboratories. 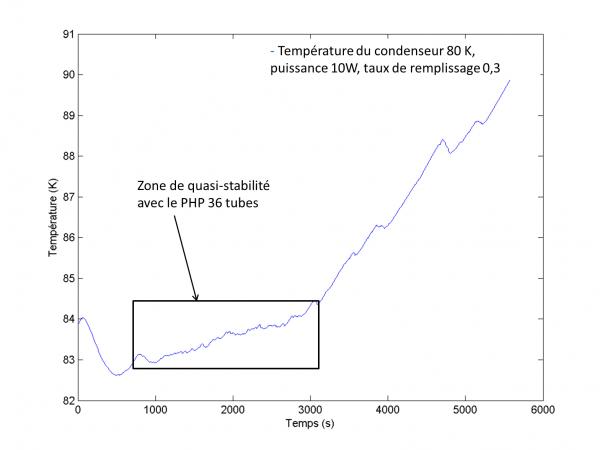