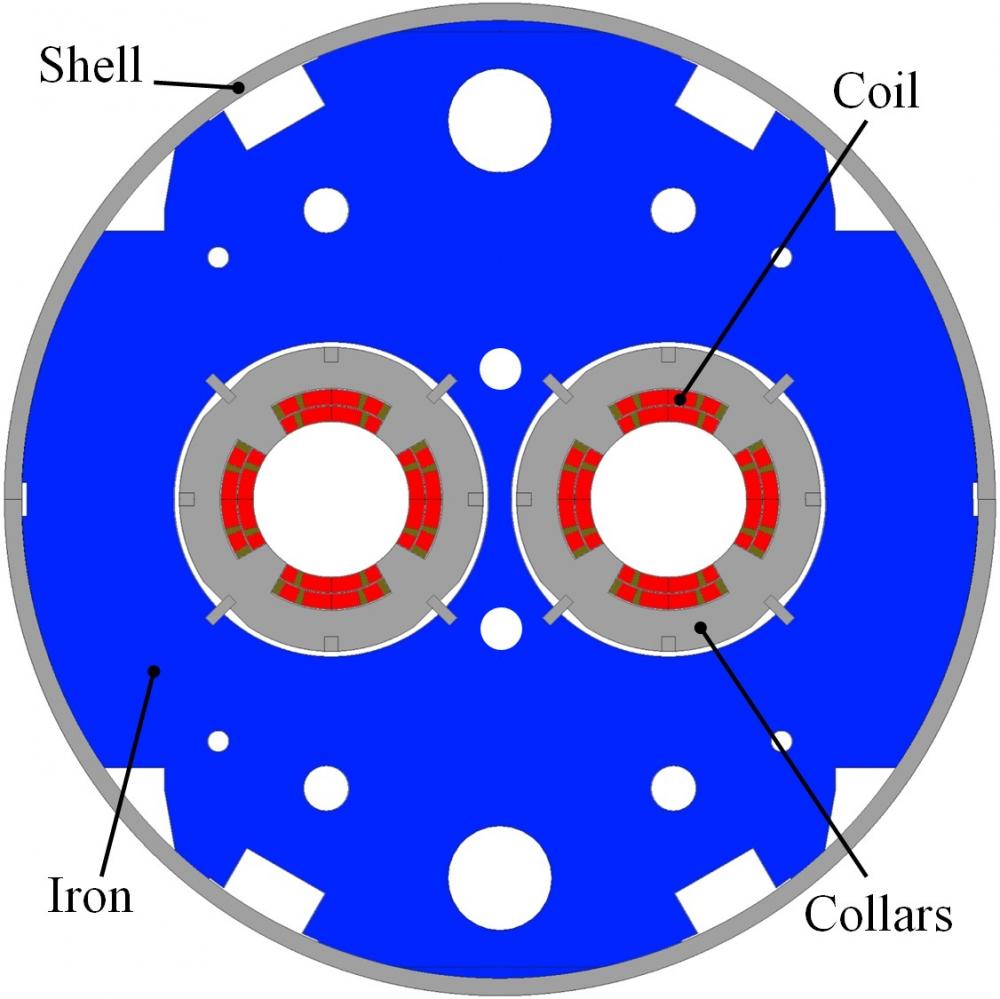 View of the MQYY magnet

For the purposes of the project (HL-LHC) to upgrade the Large Hadron Collider in terms of luminosity, scheduled for 2023, new quadrupole magnets, called MQYYs, will have to be assembled in the cold mass, called Q4. These NbTi magnets will be among the insertion magnets. They are composed of two 90 mm apertures, separated by a center-to-center distance of 194 mm, and assembled in a magnetic circuit with an outer diameter of 614 mm. They must provide an integrated gradient of 440 T/m, for an approximate magnetic length of 3.7 m, and a maximum field on the conductor of some 6.5 T. The development of these magnets is based on the design and construction of a short model (1.2 m magnetic length) by the Laboratory for Superconducting Magnet Research (LEAS), with conceptual design carried out as part of the European Framework Program FP7 from 2011-2013, then continued as part of a bilateral collaboration with CERN. The magnetic system design developed as of 2013 was modified in 2015 to make allowance for a new constraint, namely the maximum current limit in the magnet, which imposes a change of conductor. The new design shown opposite must be validated in early 2017 with the winding and polymerization of a 700 mm model coil, ready for short model assembly and testing.

At the same time, LEAS is involved in the industrial construction of two prototype MQYY magnets, with European Pre-Commercial Production (PCP) funding (Horizon 2020), as part of a consortium comprising CERN, CIEMAT and NCBJ. This project, currently in the preparatory phase is called QuaCo (for Quadrupole Corrector). It is based on functional specifications for the magnet and a competitive bid between several companies for its design, development and construction. CERN will supply the conductor, and LEAS the magnetic model for the magnet, thereby ensuring consistency with short model technical solutions. On completion of the QuaCo project, scheduled to last 48 months, two prototypes supplied by two different companies will be delivered and cold-tested within the consortium. A series of four to six magnets will follow on from this project.

Illustration of the insertion magnets for HL-LHC (E. Todesco, CERN).