The Tesla project and the TTF prototype accelerator 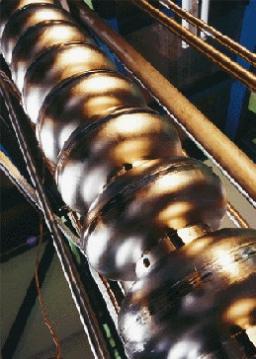 Tesla is an electron-positron linear collider project for particle physics aiming at energies in the teraelectronvolt range. The construction of the TTF prototype at the DESY (Deutshes elektronen synchrotron) laboratory in Germany has allowed us to check the performance of the various components and to make a realistic estimate of the costs of such a machine. This installation has also allowed to demonstrate the feasibility of a free electron laser operating in the self-amplified spontaneous emission mode in the ultra violet region.

After the publication in March 2001 of the Technical Design Report, which described the full project, we are presently working on improving the beam delivery system to the interaction point by designing three sub systems. These are as follows:
• the beam switchyard: a structure similar to that used on synchrotron radiation sources has been adopted to minimise the emittance growth induced by synchrotron radiation;
• the emergency extraction line;
• the collimation system of the final transport line, taking into account the higher order dispersion effects.

In September 2001, by reaching the coherent emission saturation regime, the TTF installation demonstrated the validity of the principle of self-amplified spontaneous emission (SASE) of UV light, of wavelength equal to 98 nm, in a free electron laser.

Moreover, in the course of 2003, two electropolished 9-cell superconducting cavities reached the accelerating gradient of 35 MV/m in extensive operating tests in the horizontal test cryostat, Chechia, supplied by Dapnia in 1999.

SACM was involved in these results in four ways:
• The proper functioning of the two position monitors allowing alignment of the beam trajectory as it enters the ondulator, a necessary condition for the amplification of the SASE-FEL signal. We also designed a new monitor specially suited to cryogenic environment, which will shortly be tested in a TTF cryomodule, and could be used in Tesla and in the X-FEL free electron X ray laser project.
• The commissioning of a protection system for the TTF machine using fast electronics to compare the beam current measured at different points along the Linac.
• The development of a method of baking to 110°C as the last stage in the preparation of electropolished superconducting cavities. By reducing the surface resistance, and thereby avoiding general heating of the cavities, this method allows us to increase the accelerating field limit by about 10 MV/m or more, depending on the cavities.
• Beam measurement characterisation of the HOM (high order modes) to validate the damping parameters envisaged by the Tesla project and to improve the beam vs. cavity alignment. 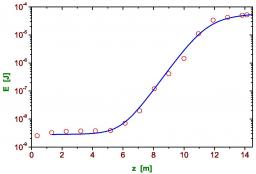 Saturation of the SASE-FEL signal along the TTF ondulator. The interaction between the electron bunch and photons emitted by synchrotron radiation in the ondulator results in the coherent amplification of the luminous emission. This has to happen within a single passage of the beam, since there are no mirrors for very small wavelengths. This application requires a high peak current and good optical quality beam because the interaction between the electron beam and the radiation is relatively weak in the case of UV or X rays.