Two scientists from the Université Nice Sophia Antipolis - Observatoire de la Côte d’Azur and from the Université Paris Diderot and CEA, have just proposed the first model to explain the origin of most of the regular satellites in our solar system. First proposed in 2010 to explain the repartition of the moons around the planet Saturn, this model is now extended to reproduce the distribution of the numerous satellites around the other giant gazeous planets (Jupiter, Neptune,…) and could as well explain the formation of satellites around the "rocky planets (Earth, Pluton,…). For all these planets, their moons may have formed from rings of matter that do not exist anymore today. These results are crucial to understand the universal laws that lead to the apparition of moons around planets. They are published in the last issue of the Science magazine (30 Novembre 2012). 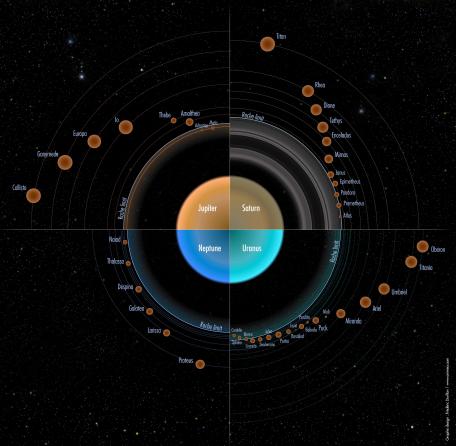 see also: the animation of the formation of Saturn's moons