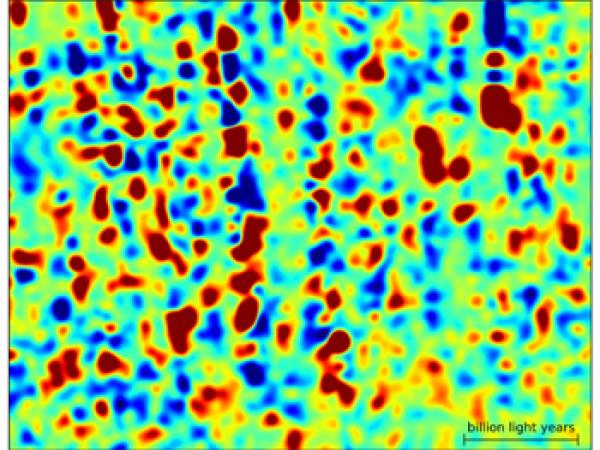 To the largest map retracing the history of the Universe!

To retrace the history of the Universe, physicists need to make images of it at its different ages, going back tens of billions of years.

Scientists from the Sloan Digital Sky Survey (SDSS-III), including a group from Irfu and CNRS (IN2P3 and INSU), have produced the largest map of the distant Universe from the BOSS (Baryon Oscillations Spectroscopic Survey) survey. This three-dimensional map shows the position in space and time of intergalactic hydrogen gas clouds. It was obtained using light from the brightest objects in the cosmos, quasars, which illuminate these clouds that can then be imaged. More than 14,000 quasars were used to make this first hydrogen map of the Universe, whose 3rd dimension allows us to go back in time. At the end of 2014, a new map will be established using a number of quasars ten times higher. It will then offer a new view of the Universe as it existed 11 billion years ago and will make it possible to study how the expansion of the Universe has evolved throughout its history.

The largest image of the sky ever obtained

The Sloan Digital Sky Survey III, a collaboration with contributions from researchers at the CNRS and CEA, has just released the widest sky survey ever carried out to the international scientific community at the annual meeting of the American Astronomy Society held in Seattle between January 10 and 13, 2011. This survey provides an image and a catalog of sources covering almost all of the sky in five colors and with a quality never before achieved in terms of the sky coverage and the accuracy of the luminosity measurements. The catalog, containing around 470 million objects (galaxies, stars, quasars, etc.), will be published in the Astrophysical Journal Supplements. 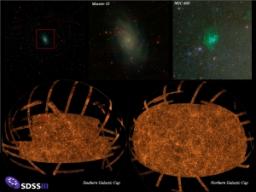