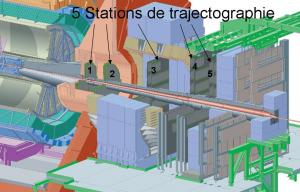 Figure 1. The tracks of μ+ / μ- pairs will be reconstructed by ten chambers shared among five tracking stations