An exotic meson discovered at CERN

The pion, predicted by Yukawa in 1935 and discovered in 1947, was the first of a family of particles called mesons: a family that has continued to grow ever since. Ordinary mesons consist of a quark and an antiquark. The theory of strong interaction also predicts the existence of more complex mesons, called ‘exotic' mesons. The existence of exotic mesons has not yet been formally proven, but scientists have been searching for them for over more than a decade. The Compass experiment at CERN, an international partnership collaboration that includes a team from the Nuclear Physics department of IRFU, revealed an exotic meson during a preliminary experiment. This is a promising sign that many more particles will may be found in the future. The meson observed by the COMPASS physicists has a mass of 1660 MeV/c2 (Millions of electron-volts/c2). Its mass is about 12 times greater than that of a pion, but that in itself is not surprising. It was the quantum properties of this particle that intrigued the scientists. These properties are ruled out for ordinary mesons, and indicate that this must have been an exotic meson. 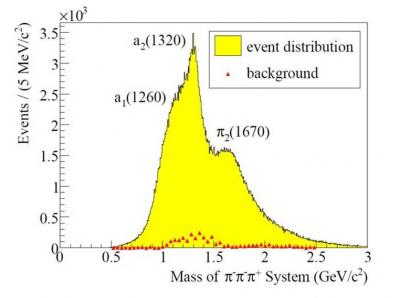