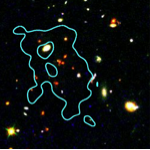 An international team led by researchers from the “Service d'Astrophysique / Laboratoire AIM” of CEA-IRFU has discovered a giant nebula of ionized gas in the central region of the distant galaxy cluster CL J1449+0856. Extending over 300,000 light-years, this nebula was detected from an emission line of hydrogen, arising from a gigantic reservoir of warm gas probably ionized by two luminous quasars of the cluster. It is the first time that astronomers find in a distant galaxy cluster such a giant emission from warm gas coexisting with the hot intracluster plasma, detected with X-ray telescopes. The hot and warm gas are likely to interact, causing the evaporation of the nebula and setting its time evolution. This discovery suggests the existence of a physical connection between gas reservoirs and the first evolutionary stages of the largest bound structures of the Universe. This work is published by Francesco Valentino and his collaborators in the revue The Astrophysical Journal.

Mysterious beacons in the distant Universe

Gigantic reservoirs of ionized hydrogen in the distant Universe were discovered in the late 1990s thanks to their very luminous Lyman-alpha emission extending over several thousand light-years. However, despite intensive investigation, many aspects of these giant Lyman-alpha nebulae remain mysterious, including their origin, powering mechanism, and time evolution. They may constitute giant reservoirs able to feed the formation of new stars and the build-up of supermassive black holes in embedded galaxies and, indeed, it has been suggested that they might be the footprints of the elusive cosmic streams of gas sustaining the growth of galaxies. On the other hand, Lyman-alpha nebulae might simply be circumgalactic material illuminated by powerful ionizing sources such as active galactic nuclei, radio-galaxies, or star-bursting galaxies. Interestingly, there are hints that giant Lyman-alpha blobs generally reside in overdense regions of the Universe, providing anecdotal evidence of a physical connection between these systems and the formation of structures in the Universe.

In attempt to shed light on these issues and in particular on the relation between Lyman-alpha nebulae and their surrounding environment, the research team targeted with the Keck Telescope one of the most distant galaxy clusters currently known, CL J1449+0856. Located at a cosmological redshift z=1.99, hence a distance of ~10 Billion light-years, this cluster was discovered a few years ago by the same team. The researchers used a narrow-band imaging technique to observe the Lyman-alpha emission of hydrogen gas with the LRIS instrument and produced a map of the cluster based on this line emission. Besides a few individual cluster galaxies emitting and absorbing Lyman-alpha light, the observations revealed a very extended and luminous emission in the central region of the cluster. The size (~300,000 light-years) and luminosity of this emission qualify it as a giant Lyman-alpha nebula, strongly reinforcing the idea that these objects are connected to the formation of largest bound structures in the Universe, galaxy clusters. The size and luminosity allowed the researchers to estimate the mass of the gas in the nebula (1-10 x 109 solar masses) and its electron density (1-10 cm-3), for a typical temperature of 10,000 K. This warm gas is spatially coincident with the hot intracluster medium which, at 107 K, is emitting X-rays detected with the XMM-Newton and Chandra telescopes. This highlights how multi-phase gas reservoirs exist in the early stages of galaxy cluster evolution, when the Universe was only 3 billion years old. 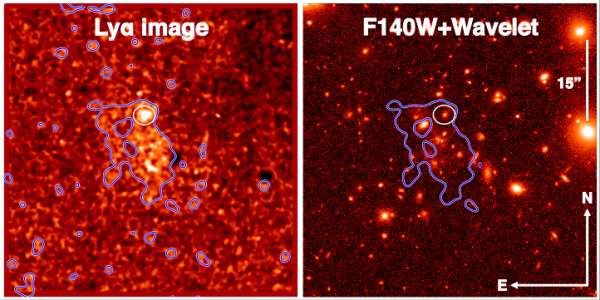 The giant Lyman alpha nebula detected with the LRIS camera on the Keck telescopes (left), and the galaxy cluster CL J1449+0856 observed at 1.4 microns with the WFC3 instrument on-board the Hubble Space Telescope (right). On each image the blue contours represent the Lyman alpha emission of the nebula, coinciding with the central region of the cluster. The vertical bar (15”) corresponds to a size of 400,000 light-years at the distance of the cluster.

New insights on the evolution of blobs and galaxy clusters

The core of a galaxy cluster is one of the most extreme environments that can be experienced by galaxies and gas in the Universe. Such extreme conditions are the origin of the emission from the giant nebula in CL J1449+0856, too. In this case, the hydrogen is either ionized by two powerful quasars identified with the Chandra telescope or by the dissipation of the energy associated with galaxy outflows, ensuing from the explosion of supernovae and the growth of supermassive black holes at the center of cluster members. 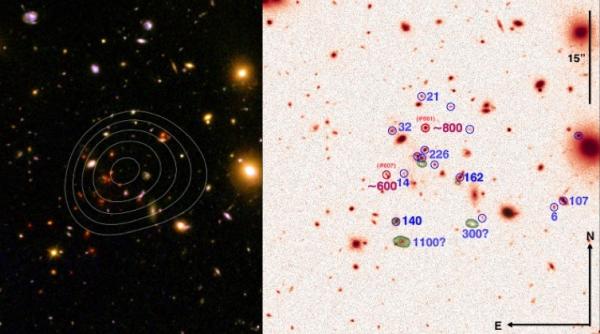 Left: An RGB image of the galaxy cluster CL J1449+0856 observed with the Hubble Space Telescope at 0.6, 1.1 and 1.4microns, superimposed with the emission of the hot intracluster plasma detected in the X-rays with the Chandra telescope. Right: Activity of the galaxies in the core of the cluster. For each of the main sources, an estimate of the amount of matter ejected into the intra-cluster medium is given (in solar masses per year), for star-forming galaxies (blue) and galaxies dominated by the activity of their central black hole (red).

Moreover, the hot and warm gas phases are likely to interact through hydrodynamic instabilities and shocks, causing the cooler gas to thermalize on timescales of 1-10 million years. In other words, barring an improbable observational coincidence, the nebula must be replenished with warm gas to compensate its evaporation. The researchers explored in detail one possible source of gas supply, namely the ejection of material from galaxies inside the cluster through supernova- or AGN-driven winds. Coupling data from the Hubble Space Telescope, the Subaru telescope, and the ALMA interferometer, they characterized the star formation and black hole activities in galaxies, and from this they estimated that more than 1000 solar masses of gas are expelled each year by the ensemble of the galaxies in the central region of the cluster into the surrounding medium, matching the requirements to sustain the giant nebula against evaporation. The energy ejected by galaxies together with the outflowing material might also heat up the intracluster medium and change its thermodynamic properties. A simple calculation of the mechanical energy associated with galaxy outflows based on the observed properties of CL J1449+0856 shows, indeed, a good agreement with state-of-the-art cosmological simulations reproducing the temperature and entropy of the intracluster medium in local clusters of galaxies.

This discovery strengthens the connection between giant gas reservoirs shining in Lyman-alpha and their surrounding environment, and shows that this relation is extended to the very extreme conditions of a cluster core. Follow-ups of other similar distant structures are planned in order to extend the sample of giant Lyman-alpha nebulae in extreme environments and to test the findings and predictions based on the observation of CL J1449+0856.

" A giant Ly-alpha nebula in the core of an X-ray cluster at z=1.99 : implications for early energy injection "
F. Valentino et al., to be published un revue The Astrophysical Journal
Access to the electronic version électronique of the publication