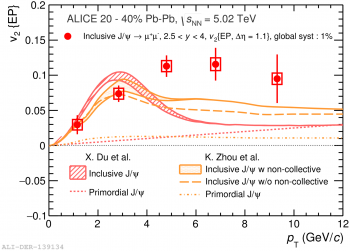 Measurement of the J/ψ elliptic flow as a function of transverse momentum pT in lead on lead ion collisions at the LHC. The bars represent the statistical uncertainties and the open boxes the systematic uncertainties. Theoretical calculations are shown as lines. The dotted lines represent the calculations without the J/ψ regeneration mechanism. The inclusions of this mechanism (solid lines) is necessary to reproduce the magnitude of the observed flow.