The TESS satellite, a NASA mission in orbit since one year, has just discovered a planet-like hot-Saturn with the method of transit in orbit around its host star, TOI-197, whose physical properties have been computed from asteroseismological measurements (study of the star's vibrations) and that with the same instrument. The planet discovered is a hot Saturn orbiting a star of mass close to that of the Sun but more advanced in the stellar evolution cycle. These promising results are the result of an international collaboration combining space and ground-based facilities. Three researchers from the Department of Astrophysics/AIM Laboratory of CEA-Irfu Saclay are members of this project, that today highlights the synergy between asteroismology and exoplanet science. This work is published in The Astronomical Journal.

The TESS (Transiting Exoplanet Survey Satellite) satellite, launched on 28 April 2018 and placed in an elliptical orbit of 13.7 days, is designed to characterize the short-lived planetary systems of almost the entire sky in orbit around stars bright enough to allow spectroscopic monitoring with ground-based instruments. TESS thus observes stars 30 to 100 times brighter than those followed by the KEPLER satellite. TESS is currently observing the southern hemisphere sky, changing the direction of pointing every 27 days. The star TOI-197 (TOI for TESS Object of Interest), was observed for only a small month, a short time for an asteroseismic study that generally requires a more time-consuming follow-up.

Despite this, the oscillation modes (star vibrations) of star TOI-197 could be detected (figure below on the left) and led to the precise characterization of the star: mass equal to 1.2 times the mass of the Sun and radius 2.9 times that of the Sun. In addition, the data also allowed the detection by the transit method of a planet, called TOI193.01, of a 14.3-day period (figure below right). This combined characterization of the star and the planet using TESS data demonstrates the potential of the satellite, as well as the high power of asteroseismology to complement spectroscopic studies for star characterization.

Left: Detection of the oscillation modes of TOI-197 at a frequency of about 430 μHz allowing the estimation of the age of the star (4.9 +/- 1.1 billion years) as well as its mass and radius. The magnitude of the star (8.2 mag) allowed its monitoring by several ground-based telescopes, particularly to study its chemical composition and to determine its temperature and brightness (5 times the solar brightness). These observations provide a more complete and accurate description of the star. Right: Transit of the planet TOI-197.01 in front of its star observed by TESS. The curve represents the normalized brightness of the star, which decreases sharply as the planet passes in front of it.

o date, 4036 planets have been discovered and confirmed, mainly orbiting stars with masses less than twice the mass of the Sun. The star TOI-197 is not an exception. However this star is in an evolutionary stage particularly late that led to classify it among the family of "sub-giants", an intermediate stage between stars of solar type and red giants. The Sun, before ending as a white dwarf, will belong to this class of stars.

Thanks to the observation sequence implemented by TESS, It was possible in the case of TOI-197 to detect the low oscillation frequencies of the star and thus to deduce the physical parameters of the sub-giant star. On the other hand, this study revealed the presence of a planet with a radius of 9.17 terrestrial rays and a mass of 60.5 terrestrial masses, which is close to Saturn's values. The density measured with asteroseismology (0.431 g.cm-3 to within 15%) places this planet among the best characterized hot-saturn type planets to date. However, the orbital period in this case is only 14.3 days. This planet type Saturn-warm is the first planet discovered by TESS orbiting around a star whose physical properties could be determined by asteroseismology with the same instrumentation. 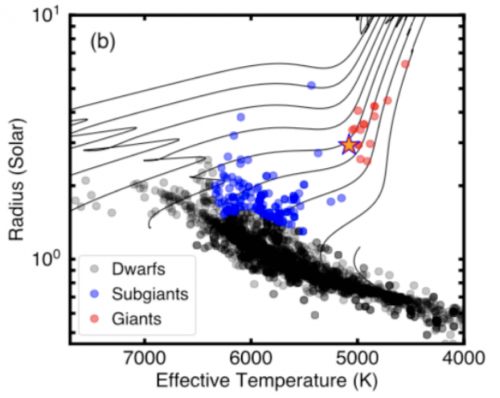 Representation of the evolutionary state of the star TOI-197 (orange star) housing the new discovered planet. The black dots represent the position in the temperature diagram versus the radius of stars similar to the Sun, the red dots represent the very advanced stars of the "Red Giants" type and the blue stars the subgiants. The star TOI-197 is in an intermediate state between the sub-giant and red giant phase.

A promising path toward future missions

These characteristics of both the host star and the planet are the keys to the understanding the evolution of the star-planet system. The planet type Hot Saturn TOI-197.01 detected by TESS could well be a precursor, still poorly understood, of populations of gaseous planets orbiting around stars evolving towards the red giant stage. The determination of the age of the host star by asteroseismology combined with the observation of the eccentricity of the orbit of TOI-197.01 also has interesting consequences on tidal dissipation phenomena in the planet. The study presented here and its results, combining asteroseismology, spectroscopy, radial velocity, and transit detection, are particularly useful in the preparation of the analytical methods developed as part of the European Space Agency's PLATO mission, which is scheduled to be launched in 2024.