The FRESCA2 project ends on a high note with a magnetic field record of 14.6 Teslas at 1.9 Kelvin 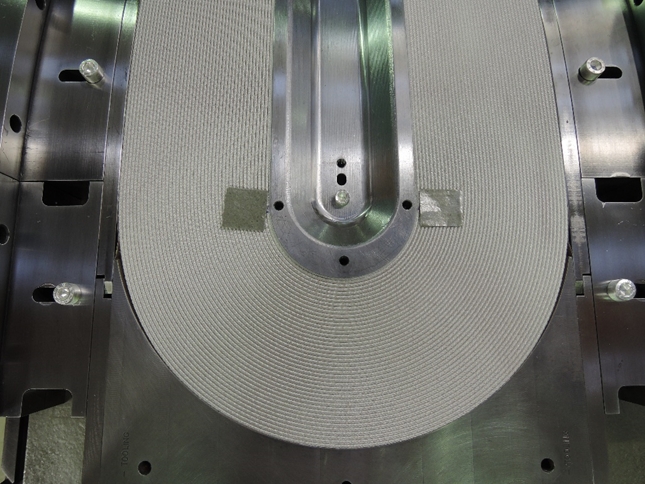 Partial view of the winding of a FRESCA2 wafer

After winding, the seventh and last coil of FRESCA2 left Saclay in June 2019 in its reaction mould, putting an end to Irfu's activity on this project, which began in 2009 in collaboration with CERN. This type 3-4 coil is a spare coil, which, after reaction, instrumentation and impregnation at CERN, will join its type 1-2 sister on CERN shelves.

In a first step, the FRESCA2 dipole, a 100 mm Nb3Sn dipole magnet tested at CERN, had reached a field of 13.3 T (see highlight of 20/09/2017).  A new series of tests in April 2018, after modifying the mechanical preloading of the magnet, allowed the FRESCA2 dipole to reach 14.6 T at a temperature of 1.9 K, representing a new field record for a dipole of this aperture. During these tests, the stability of its operation was validated at 14.4 T at 1.9 K, and at 13.6 T at 4.5 K respectively. The dipole has been qualified: it will now be able to be used as a test station to accommodate, in particular, tests of small magnets made from high temperature superconductors.

FRESCA2 is a 1.5 m-long high field dipole initially designed to provide a relatively homogeneous central field of 13 T at 4.2 K in a 100 mm opening. The geometry chosen is a block configuration; each pole consists of two "racetrack" coils, each formed by two layers of conductor with inclined heads to clear the aperture. The conductor is a Rutherford-type Nb3Sn cable, consisting of 40 strands each of 1 mm diameter.

Its design and implementation are the result of a collaboration between CERN and two departments of the Irfu, DACM and DIS. Initiated as part of the European Coordination for Accelerator Research and Development (EuCARD) programme, the studies continued as part of the first CERN/CEA collaboration contract on superconducting magnets for future accelerators.

The realization of FRESCA2 meets several objectives: it will equip the conductor test station at CERN FRESCA2 (= Facility for the REception of Superconducting CAbles), it is part of the R&D programme for future circular colliders (FCC) and it will provide a background field for the test of cables and superconducting magnets using Nb3Sn and HTc conductors (high critical temperature), particularly the inserts developed under the EuCARD and EuCARD2 programmes, as well as future developments.

The design of the magnet and the tools necessary for its construction was done by the combined teams of the two laboratories and is a good example of collaboration between European partners. After their winding in Saclay, the coils were reacted, impregnated and assembled at CERN.  CEA has produced seven coils, two of which are spare coils.

1] Training: succession of spontaneous quenches [2] which reflect the progressive adaptation of the magnet to the stresses.
2] Quench: resistive transition of the superconductor under the effect of mechanical, magnetic or thermal disturbances.

To find out more at Irfu : Fresca2